McIntosh, the home entertainment and audio manufacturer, is returning to custom installation with a five-strong range that debuted at ISE 2019.

Commenting on the new McIntosh CI range of Distribution Amplifiers and In-Wall & In-Ceiling Speakers, Charlie Randall, McIntosh President and CEO, said: “We are excited to return to the custom install category with these new amplifiers and speakers. Many of our traditional home audio products have been used for distributed audio applications by talented CI installers. We are happy to once again offer products specifically designed for custom installation.”

About the McIntosh Distribution Amplifiers:

The Class D amplifiers do not require noisy cooling fans making them perfect for a wide range of CI applications. Both feature convenient front panel LED indicators for channel status and the MI254 goes a stage further to include two blue McIntosh Watt Meters displaying the summed power output of channels 1 + 2 and channels 3 + 4. 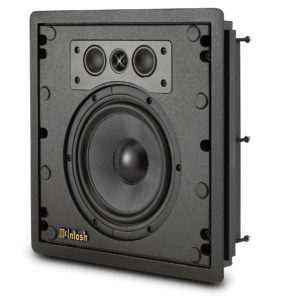 About the McIntosh In-Wall and In-Ceiling Speakers:

McIntosh has also launched three new CI speakers: the WS500 and WS300 (WS300 pictured left) In-Wall Speakers, plus the CS200 In-Ceiling Speaker, all three of which are voice-matched to each other for seamless integration. The WS500 and WS300 can be adapted to both two-channel and multi-channel needs. Both are three-way speakers; their fully enclosed with controlled air chambers, minimise distortion and response irregularities.

Both the WS500 and WS300 feature newly designed shallow woofers that allow for each speaker to be just 93mm deep, permitting them to fit in almost any wall. The woofers utilise a long-throw, high-power design with moulded carbon-reinforced cones with elastomeric surrounds for high linearity.