When Vaughans joined the roll of honour last year of retailers who have won our Consumer Electronics Retailer of the Year award, ERT was keen to experience first-hand what makes it so special. Chris Frankland went to talk to managing director Alun Vaughan at his Cardiff store

Parked outside the Vaughans store in Cardiff as ERT arrives is a Mercedes SLK with its roof down. Its driver is loading two 42in Panasonic TVs into the back of it. With the TVs safely stashed, he leaps into the car and speeds off. We can hardly believe our eyes.

As ERT is greeted by managing director Alun Vaughan, we mention the man in the SLK as we sit down for our interview.

He tells us that this is a phenomenon he has noticed more at the Cardiff store with its edge-of-town, retail park location, where Marks & Spencer, Homebase, Argos and Currys PC World are just a stone’s throw away.

He adds: “This is a big-city store and totally different from our other stores in smaller towns. In the city, it is ‘I want it, and I want it now’. In the other stores, people are happy to get it delivered the next day.”

Cardiff is a big-city store and totally different from our other stores in smaller towns. In the city, it is ‘I want it, and I want it now’. In the other stores, people are happy to get it delivered the next day

He believes it may also be down to the fact that most customers drive there and park outside. They’re even happy to take a 42in TV away themselves. “If we asked people in our other stores if they wanted to take a 42in TV away with them,” he jokes, “they’d ask us what had gone wrong with our service! In Cardiff, they just put it in the car.” 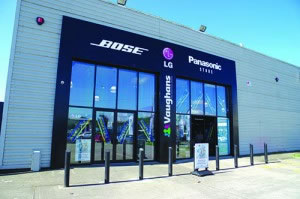 But how easy is it for customers to set up a smart TV by themselves? “You have to know what you are doing. Most customers are buying smart TVs and when you get to their house to set it up, they don’t even know their wireless router password. We have engineers and delivery guys to do that. And yes, we do get phone calls from people like the guy in the SLK who then want you to go out to them on a service call because they find they can’t do it by themselves. But we won’t charge them for it. It’s just part of the service they should have let us provide in the first place. And if you don’t get customers coming back a second time, you won’t be around for long.”

Quality of service is of course the cornerstone on which he built up the business founded by his sister Anne and late brother-in-law Hywel back in 1971, and it’s what won him his ERT award for Consumer Electronics Retailer of the Year last year. So does he find it frustrating when customers like your SLK man don’t take advantage of it? “Yes, we would rather go to their home and give them the customer journey that we have built our reputation on, but if they don’t want it, you can’t force them.”

“People Google stuff on their smartphones in front of you to find the best price and if you don’t have the stock, they won’t wait for it. I recently served a customer, gave him a demonstration and told him he could have it the next day. So he went on his phone and told me he had ordered it from John Lewis. It doesn’t matter what training you have, if you have customers who want it there and then and you don’t have it in stock.”

Mr Vaughan says that this is why he carries massive stock in Cardiff, but occasionally there is a run on something and he has to order from his warehouse in Haverfordwest, and this is when you risk losing those impatient customers who just won’t wait.

Going back to his ERT award, Mr Vaughan tells us how it was a real morale-booster for staff: “It is an honour for myself – and all my staff – to receive such recognition from our industry. The award will enhance our business by cementing the trust our existing customers have in us, and by instilling confidence in new ones. We will take great pride in displaying the award and by informing all our customers – both old and new – through our local newspapers and radio stations.”

He tells ERT that having his own service engineers for white and brown goods is a vital part of the Vaughans customer experience. He explains: “I believe there is no one else in south Wales who has brown and white goods service engineers. We try to do most repairs in-house. We have five engineers – three for whites and two for browns. We want to take people from cradle to grave. They buy something and we look after it. Most manufacturers say seven to 10 days for service, we do it within 24 hours and if we can’t repair it, we will lend them something while we fix it. To survive today, you have to be better. It’s what sets us apart.”

The Vaughans empire started in Haverfordwest, where the company now has three stores – one white-goods only, a Panasonic Store and a multi-brand shop. Vaughans also has showrooms in Aberystwyth and St Clears, plus a Panasonic Store in Llanelli.

The Cardiff branch is the most recent to open, in 2012, and Mr Vaughan added an LG shop-in-shop there in November last year.

With around 50 staff, training is a big issue for Vaughans in providing the quality of service it has always prided itself upon.

“You need the selling skills as well as competitive prices,” says Mr Vaughan. “The whole package has to be right. George Morton at Top Level Solutions is good on selling skills, whereas manufacturers’ training is more about products. As new staff come in, he can give them the basics and the benefit of his retail experience. We don’t want lazy salesmen – those who just stand there and ask, ‘Can I help you?’ Because customers will say, ‘No, just looking’.

“We expect customers to be greeted within about a minute. Let them settle first, don’t pounce on them as soon as they come through the door, or you’ll scare them off.”

The new LG shop-in-shop opened in Cardiff late last year. ERT asks how that has been going. “The LG shop-in-shop has been fabulous. It opened the week before Christmas last year,” he explains. “It does browns and whites. It is in the same part of the store as Bose, which is totally separate with its own entrance. We made the shop two-thirds as big again to accommodate LG. We are finding that people are buying bigger tellies than we ever thought – 79in and 84in. It’s doing great trade on browns and whites and customers can see the complete range of TVs and 26 pieces of white goods.”

And what of Bose, has that been doing well for Vaughans, too? He smiles and says: “Bose is a different world. You make the margin, the sound quality is phenomenal and once you own one Bose product you are hooked. We do very well. They are renowned for sound and they have a little mini system that we sell hundreds of – and we make more on that £170 Bose system than we do on a £350 TV. Fact. They go all the way up to £3,500 and we do sell them. We display every single Bose product. The noise-cancelling headphones at £299 are good sellers.”

The product mix in the Vaughans stores is around 65 per cent whites and Mr Vaughan expects it will end up being 80 per cent. He says: “Margins on whites are better. With brown-goods margins, I think manufacturers need to ask themselves, can a retailer survive on this?”

Another product category he does well with is small appliances. He tells ERT: “You can sell a Smeg kettle and make more than on a 32in TV, so there is still good margin. It’s a question of fine-tuning your range and going for more premium products.”

But does he think 4K will turn around the brown-goods market? “I don’t think the content is there yet for 4K,” he says. “Possibly when it is there, then it may change. Now people are buying sets because their old one has broken.”

When it comes to the connected home market, however, Mr Vaughan is far more positive: “It will be absolutely huge. We do a colossal amount of Bose multi-room systems. Panasonic has just brought out a big multi-room range and they have CD players that will stream – soundbars, too.”

Wearable tech, however, is something he remains sceptical about: “I don’t think they’d come to us for that kind of product. We’ll look at it if you can make an acceptable margin, otherwise there is no point. Seven per cent won’t do.”

And what of the future for Vaughans? He thinks for a while and says thoughtfully: “We will leave it alone for a year and see where the industry goes. Cardiff is a recent thing. Maybe there is room for expansion here in the next 18 months.”

‘I am more positive than I have ever been…’