Moss of Bath is celebrating its 55th birthday this year, opening a new smart-home CE showroom and is on target to grow its business by 10 per cent. So how is owner Tim Moss, who won this year’s ERT Special Achievement Award, making money out of brown goods? Sean Hannam finds out

If every electrical retailer were as positive and passionate as Tim Moss, then our industry would be a hell of a lot healthier than it is now.

“Business is great,” he tells me, excitedly, as we’re sat in the small – yet stylish – audio department of his shop, which is based in a five-floor Georgian building in the city of Bath.

And yet, he’s selling brown goods only – a product area that many independents have given up on, as they can’t make money from it.

“Brown goods across the UK is in free fall – the TV, audio and multi-room markets are all down. At the beginning of the year, we had a meeting to address this. Our target is 10 per cent growth this year and we’re currently on target to reach that – no problem at all,” he says.

So how is the ERT award-winning business, which celebrates its 55th birthday this year, bucking the trend?

“Old-fashioned selling,” says Mr Moss. “We say to people, ‘that’s very good, but have you seen, heard and touched this, or this?’ 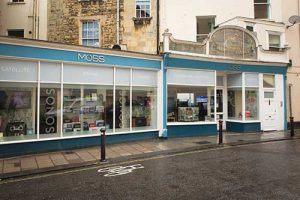 “Once you get into that mind-set, it becomes natural and it’s brilliant. You’ve got to make it interactive – play the customer a bit of Sonos – and ask them what their favourite music is. OLED is brilliant – it’s a premium product and it’s visibly better. Any salesman has now got the opportunity to sell a better product rather than just a cheap TV. I never ever want to deal with the cheap end of the TV market – I don’t want to sell a 99 quid TV. What’s the point? Panasonic has launched a 65in OLED for £7,000 – I sold three in a week.”

Mr Moss’s store may be in an affluent area, but he can’t solely rely on passing trade. During my visit, no one comes into the shop, but, as he tells me: “Today, we’ll do 10 grand, as I know there’s money coming in from installation.

“The future is bright for a brown-goods retailer with the right attitude. The brown-goods industry is notorious for negativity and I get so cross about it. I’m a positive sort of guy – let’s grow, do things and move forward. I talk to some retailers and they tell me that it’s not as good as it used to be.

“Well, that was yesterday – it’s today now. They blame the weather, the exchange rate or Brexit. It’s never ever anything to do with them… Just get off your butt.” 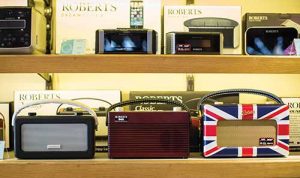 Q: You’re opening a new smart-home CE showroom on the first floor of your store. Can you tell us about that?
Tim Moss: The first floor is a beautiful drawing room with high ceilings and it lends itself to it – I want it to be a conceptual experience space. A lot of people come to us with big plans or their proposed new-build. It will be nice for us to have a big table, where we can sit down with them, have a coffee and go through their plans in detail. It’s a room away from the shopfloor where we can take clients.

Retailing now is all about experiences, rather than just rows and rows of products.

I like the idea of having Amina in-wall speakers and Bowers & Wilkins in-wall and ceiling speakers and motorised lifts for TVs – the room will be experience-led. I want people to say, ‘wow – I didn’t know you could do that’. You need to surprise people. If you walk into a Currys, you don’t get that wow factor – it’s just rows of TVs. If people can see a TV coming out of a cabinet – going up and down on a lift – they will love it and they will be inspired by it.

Q: You’ve been doing custom install (CI) for years – it’s the backbone of your business, isn’t it?
TM: It is. Ten years ago, my revenue stream was 75 per cent retail and 25 per cent CI – that’s now totally reversed. The shopfloor is important, but it’s more of a showroom – I don’t necessarily rely on it to create revenue.

If you go back 20 years, we had a wall-mounted plasma TV from Philips on display in-store that Philips said was the first ever on-wall TV in the UK. We had an open evening and it was phenomenal. The screens were £13,000 each and a guy came in and bought two of them – he wanted them on the wall. To be honest, we didn’t have a clue – we had a van from which we were installing pub and sound systems and then we got involved with wall-mounting TVs. 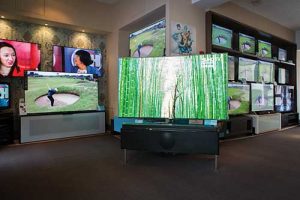 From there to where we are today, we’ve evolved into what is now called CI, predominantly because of the internet. It has had such a big effect on our business – now everything needs to be connected and centralised rather than localised. Me and my colleague Harvey [Samways – sales director] get 20 or 25 quotes a week from leads that come mostly from word-of-mouth, architects and builders. There are so many avenues that we get business from. On average, we wall-mount TVs every single day of the year. I don’t know how brown-goods retailers without CI survive.

Q: The connected home is the next wave in CI, isn’t it?
TM: Correct. We do a lot of work with matrixes and everything is wired over CAT 6 cable. Forget using wi-fi – use connected CAT 6 back to a network switch.

Our unique thing is that we can do the first and final fix – we can manage the whole project for the customer.

I’ve gone from having one custom installation van on the road to six and they’re all fully booked a week to 10 days in advance. We often get involved in some big jobs where we’re on site for a month to six weeks.

The smart home is massive. For example, if you take a £1 million house, it will come to a point where people expect certain things in their home – in-ceiling speakers and a cinema room – with data cables and smart technology.

Q: You relaunched your website in 2015, but you don’t sell online. Why is that?
TM: I don’t want to get involved in that – I don’t want to be the cheapest. I looked at other people’s websites in the industry and the first things you saw were the words ‘sale’ and ‘discount’. Our website is a shop window for our products.

Q: A lot of dealers have found it hard to make money from CE and have moved into selling home appliances too. You’ve stuck to your guns and only sell brown goods. Will you ever move into white goods?
TM: No – brown goods is what I’m comfortable with. I find the products sexy and sellable – I enjoy selling brown goods. I can’t get excited by a tumble-dryer, I really can’t. I think we have a beautiful shop – if we tried to mix it with white goods, the whole thing would be ruined. There’s nothing wrong with being specialised. Why not stick to what you know?

Q: You’re choosy about the brands you put in your store, aren’t you?
TM: Yes, we are. We look at several things – margin and what we call ‘real margin’. In other words, what can you actually get for it? We also look at after-sales support – that’s very important for us. We have engineers who can repair things in-house – having an engineer working for a retail store is almost unheard-of nowadays. We’re one of the only ones doing it and we’re very busy with it.

Five years ago, when the industry was in free fall, with the internet and dotcoms, some brands, like Sony and Panasonic, didn’t particularly want retailers – now they’re all coming back, cap-in-hand, saying, ‘guys, we need you because we can’t sell an OLED without someone coming to see it’.

Q: Do you get good support from the brands?
TM: Not always, but I’m very vocal about it if we don’t.

Q: This year, Moss of Bath is celebrating its 55th birthday. So how does it feel to be 55?
TM: Actually, I’m also 55 years old myself this year – my dad, Frank, opened the store the year I was born – 1962. I’m immensely proud that we’re still here after 55 years. We are strong, we have no debt and we have a thriving, profitable business. A lot of people I talk to are just hanging in there. I have no plans to retire and I enjoy it – I like the buzz and the banter. The key thing in brown goods is that you have to keep moving and rethinking what people want. I love it.

Don’t be a retail dinosaur