Herbert Todd & Son won the coveted Turning Point Award at this year’s ERT Awards, all thanks to its commitment to reinforcing the idea of ERT’s Turning Point campaign, and the work that the retailer has completed in the last 18 months is evidence of that. Jack Cheeseman spoke to partner, Matthew Todd, to find out more…

Based in Yorkshire, Herbert Todd & Son is an electrical retailer with three branches – Harrogate, Acomb and Monks Cross. The name might sound familiar… that’s because the company enjoyed tremendous success at this year’s ERT Awards, walking away with not just one or two, but three Awards.

In April last year, the retailer moved its Monks Cross store to a 10,000-square-foot, multimillion- pound flagship destination store in an out-of-town shopping area, close to John Lewis. The company sells mid to premium products and prides itself on the quality of its showroom, experiential retail – including cooking events (more on that later), staff knowledge and customer service. This new store is the focus of this profile. Curious about how the business made the best of the move and what key decisions it made when opening, I spoke with Partner, Matthew Todd, who tells me that they had definitely outgrown the previous unit in the town centre but critically, they were approached by a developer who was keen to buy the site and this prompted the move. “We managed to move without any financial burden and we didn’t lose any trading days with the way it was all structured,” he explains, “so it was a great deal. We’re now in a busy, vibrant out-of-town shopping area and we get a huge amount of passing traffic and as long as we do our marketing correctly, people will know where we are and pop in and have a look. 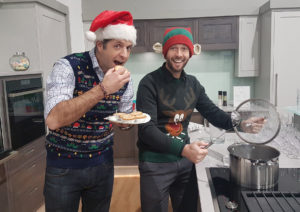 “Since the move we’re now making more sales but also making higher value sales. And there’s been so much positivity around the new store, which is great; when customers come in they can’t believe what it looks like now. The biggest change has been in utilising the space we have here to its best effect, like putting in premium manufacturer areas for people like Smeg, AEG, Neff, Rangemaster and so on. All these guys have got their own area to show off their products and they’re all wired up as well.”

“With the space we’ve got now we’re a bit like Currys – we’re large format – so my hope is that if we manage to market things to the right people we can almost be all things to all people. We do have something for everyone and we should be able to appeal to a large group of people, it’s just enticing them in and finding ways of doing that.”

Discussing the initial design and layout of the store, Mr Todd says that he had a blank canvas and therefore the opportunity to make each of the departments obvious and accessible, with a nice flow throughout, and something that is visually appealing as soon as the customer walks in. “The idea was the make it a pleasant place to come in to; we’ve never been about the pressure sale, so it’s the hope that people come into the shop and wander round, ask questions, try out products if they want to. We wanted to give them the best experience in store.

The smart home is a newer area that Herbert Todd & Son is developing and Mr Todd believes that whether retailers like it or not, they need to get their heads around this sector, the products involved and the concept of retailing them successfully. In-store, smart TVs and smart speakers are Mr Todd’s best-selling devices, but he adds: “One or two people come in asking if they can control their oven with their phone, and we can show them a solution, not that they move forward with it because they ask themselves ‘do I need to be spending that amount of money, will I actually use this function?’

“Manufacturers are always pushing the boundaries,” he continues, “especially in the TV sector; we’ve already been shown 8K, and that’s now come to market. But things are moving forward the whole time and my fear is that people are only just getting their heads around 4K, and there’s not much 4K content available, and now 8K is coming out! To me that’s probably just going to stall some of the 4K TV sales that we could have made, because the customer who just saved up to buy 4K may now decide to wait and spend their money later on when 8K is out fully. We have to push things on and on but I don’t know whether sometimes manufacturers are a bit too quick to the market!” 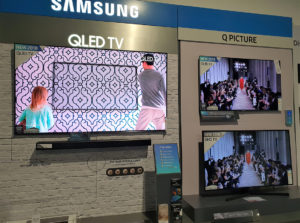 One of the prominent features of Mr Todd’s new store is the cooking demonstration and experience zone. Having heard that other retailers were having success with this concept, and after considering the idea in the past – but put off by the changes required to meet the health and safety standards – he decided that this would be the ideal time to build something that offers a unique customer experience. The fully working kitchen area includes a series of ovens and induction hobs, plus a refrigerator and freezer and a sink with a boiling hot water tap. The store hosts regular events for customers to demonstrate how these various appliances work so they can get a better idea if they are items they want in their home.

I ask what the response has been like to this change in the business. Mr Todd replies: “It’s been brilliant – very well received. When we market these events effectively we can get a good volume of people into the store, some just to see what all the fuss is about. That leads through to sales, usually of higher value items than some customers might have been considering beforehand; that’s because when these products are being demonstrated – like a steam or touch control oven – they can get their heads around it, they taste how the food comes out, and when everyone is there being enthusiastic they buy into the idea.

“I was talking to other retailers before who have done regular days like this in the past and they felt that it really raised the profile of their shop. If you can show you’ve got the expertise and shout about the fact you’ve got certain products in-store that are wired up and ready to use, it really adds another level to actually cook something and let the customer taste things that they have produced.”

Mr Todd goes on to talk about the company’s website, which, for the last year, has been transactional. He explains that new elements are being added regularly and he is striving to make the complete customer process as frictionless as possible, and now he is aiming to be open for business 24-hours-a-day. But, he assures me: “We’re not trying to service the whole country because I don’t want to go head-to-head with national retailers. To be credible nowadays you need a very credible website; everyone researches online whether they want to buy online at the end of the day or not, and if your website doesn’t look top notch then people’s perception of your company will not be top notch.”