Alexa, Siri and their voice-assistant friends are fuelling the uptake of smart-home products and a new survey from Futuresource Consulting shows the category is already gaining momentum. Analyst Filipe Oliveira has the details

The light switch may be on its way to obsolescence as consumers increasingly turn to apps on their smartphone or Amazon’s Alexa to control their homes.
Voice-assistant speakers are likely to prove a turning point in the uptake of the smart home, according to Futuresource Consulting’s latest Smart Home Consumer Survey.
The report revealed that 27 per cent of UK homes had installed at least one smart-home device that could be controlled wirelessly, either by a mobile device, PC or hub device such as Amazon Echo. The study focused on the main smart-home categories of lighting, security, climate control and smart audio, but also quizzed consumers about their attitudes to smart refrigeration and laundry.
Just over two-thirds (68 per cent) were what we term ‘beginners’, with only one or two connected devices. ‘Intermediate’ (three to five devices) and ‘advanced’ adopters (six or more) were fewer in number (26 per cent and six per cent respectively). The research also revealed that those who already owned one or two devices were more likely to want to automate more areas in their home.
UK consumers seem particularly keen on climate control, with 14 per cent of those we surveyed having installed smart thermostats. Hive was the most popular brand, while Philips Hue led the way in lighting – the second most important category in the smart home.
Security rounded off the top three, with an eight per cent adoption level, but it was the most common first step that consumers would take into the smart home.
Other smart-home applications that were attracting interest included wireless multi-room audio, watering systems and blinds and shutters.
These findings substantiate the view that the smart-home will be a major growth area for several some years to come. Thirty per cent of respondents said that they were likely to buy a speaker with voice assistant in the next six to 12 months. It was revealing that among intermediate and advanced smart-home adopters, the number of respondents interested in installing more devices increased substantially.
Seventy per cent of intermediate and advanced adopters told us they planned to install a smart climate control system within a year.
Voice-assistant devices look set to be a key driver in this process. One-in-eight respondents were aware of voice personal speakers like Amazon Echo and Google Home.
Amazon in particular ran a ubiquitous marketing campaign and consumers had registered this.
Perhaps more tellingly, 30 per cent were considering buying either Echo or Google Home in the near future. Of those who already owned one, six per cent purchased it bundled with another smart-home product, most often lighting.
Other popular bundles included climate control devices like those from Netatmo. Interestingly, voice-assistant speakers were also popular gifts, with 36 per cent of Echo and Google Home owners having received them as a present. 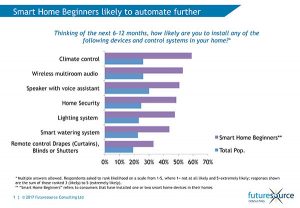 Pivotal
Amazon Echo and Google Home look set to play a pivotal role in the smart home. More than 19 per cent of owners we surveyed said they used their device to control their central heating and a third planned to do so in the future. Meanwhile, a fifth of all Alexa or Google owners used their speaker to switch on their lights, while a further 38 per cent said they would do in the future.
Despite their potential as smart-home controllers, music streaming was the main purpose to which Amazon and Google Home speakers were put. Over 60 per cent of owners bought them for music streaming. Voice assistance paves the way for the smart home to emerge by stealth, as consumers who automate their audio entertainment seem keen to progress automation in other areas.
Major appliances currently lag behind entertainment and other smart-home devices. However, potential for future uptake is high, as more than three-quarters (77 per cent) of consumers we polled thought that the next time they purchased a refrigerator, they’d most likely be taking home a connected one.
Futuresource Consulting believes that relatively long replacement cycles in large appliances will mean that penetration rates will remain low for several years.
So what’s holding people back? Our research showed that consumers perceived a number of barriers. Seventy per cent of non-adopters believed smart-home products were ‘too expensive’. More than half (54 per cent) said they had not taken steps towards automation because they saw a lack of benefit, implying that more work needed to be done to advertise the merits of connected technology.
Futuresource believes the outlook is healthy, with products ranging from speakers to fridges set to turn our homes into smart homes.