The state we’re in

Is it all doom and gloom for independents and the high-street, or are there some glimmers of hope? GfK analyst Paul Carrington has the facts and figures

Having been asked to talk about the state of the market, there will be a bit of doom and gloom. It feels like the end of the world as we know it – we have post-Brexit, a weakened pound and lots of consumers braced for price increases.

Since Donald Trump was made president of the US, we’ve seen a ‘Trump slump’ and a dip in consumer confidence.

The word on the street is that confidence will continue to worsen. When consumers get hit in the pocket by the cost of petrol and groceries etc, this could potentially mean a delay in the purchase of luxury items. If you have a tablet or a laptop, and you’d like a new one, if the cost of things is going up, maybe you’ll put that purchase off for six months. That is a bit of a worry and there could be a storm coming.

If you look at the consumer electronics retail sector, what’s potentially worrying is that the market continues to consolidate – almost 60 per of the value of goods of CE products tracked by GfK is coming through the top five retailers in the sector.

It does beg the question, is the specialist electrical retailer an endangered species? I hope not, but it’s certainly a worrying time.

In the wider retail scene, the high street is still facing a lot of the problems it did when it came through the recession. There are a lot of empty stores out there and we’re seeing high streets full of more and more charity shops and coffee shops.

Looking at the independent market, back in 2010, independents had 20 per cent value share of consumer electronics sales – in 2016, that share has dropped to nine per cent. 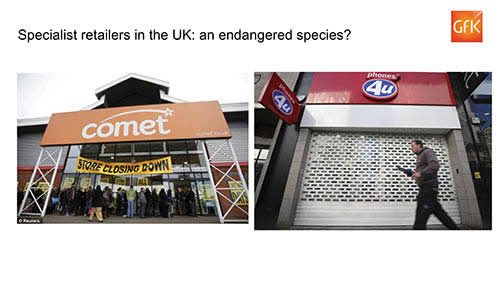 Each time there’s a downturn, there’s a cull – it’s quite grim reading for a lot of independents. One of the reasons for this is the continued rise of the generalist retailer – the supermarkets’ footprint has rapidly increased.

We’ve also seen that the internet is much more important when it comes to money changing hands. In 2007, roughly 14p in the pound was spent online on a consumer electronics purchase – in 2016, it’s almost 30p. Consumer research suggests that six out of 10 customers are using the internet in some part of their purchase journey.

In 2016, we saw a television market that declined by three per cent in value, but the online transactions still racked up double-digit growth.

The customer is greedy and wants to have it all – online they want to save money, explore a wide range of products and get them fast.

In bricks-and-mortar retailers, we see that customers still want to look at and feel products – particularly those that are more niche or expensive.

Online purchases are often solo purchases – if customers are looking for a suite of products, they will probably need some assistance in-store.

So, what are the underlying market trends? Consumer confidence will worsen, but some consumers are prepared for possible price increases. Price erosion has hit independent retailers in the long-term and the internet is a key battleground.

With the vinyl revival going strong, independents have a 71 per cent market share of turntables over £300, so there are some reasons to be cheerful.