Retailers need to be radically transparent about their pricing in order to compete with the online channel, Dixons Carphone’s chief executive Sebastian James has argued.

Mr James said: “We spend our entire lives thinking where we are at an advantage versus pure-players and where we are disadvantaged. Because one thing’s for sure, although customers want to come into our stores and talk with someone, they’re not prepared to pay for it.”

He claimed that Dixons Carphone retail stores had to price-match online competitors such as Amazon. And staff in-stores, he added, now show all competitor prices right there and then, to avoid customers walking away and buying online elsewhere. This is also a practice that will be implemented on its website later this year.

“We’ve found that conversion rates actually go up, even if we’re a little bit more expensive,” he said.

Mr Gajzer argued that online and in-store need to interact to work well, as one is no good without the other. “Brand building, the image of a brand, the DNA, the customer experience, everything you call multichannel – it all depends on and started with the store,” he said.

Mr James agreed, saying that customers start their shopping journey online, researching products before coming into a store to speak to a professional. This is where the store really comes into play, as it “can do something that online cannot, which is really demonstrate the products as they should be”.

The panel agreed that in order to demonstrate these products, investing in technical staff was key, as the conversation they have with potential customers is where value is added.

Although Mr James admitted Dixons didn’t always get this quite right. “We used to have a recruitment policy, which was ‘have you got a pulse? You’re hired.’ We’ve moved on a bit from that,” he said.

“I think that, increasingly, if you’re going to have stores, you’d better be doing something special in those stores, because otherwise customers are going to say, and quite rightly, ‘It has no advantage to me jogging all the way to your shop’. You’ve got to be making people feel good – feel like they’re having a real experience and, of course, giving them information that is not available from just looking on their smartphone.”

However, capturing the value of that conversation and transferring it to a sale on your website is also key, Mr James added. He said he had found that customers who shop through more than one channel always buy more.

For Dixons Carphone, 40 per cent of its transactions are now click-and-collect, which Mr James believes will become a ‘very powerful’ proposition, as it sets about expanding this offering to all of its stores nationwide.

He went on to explain that it had gathered more data about its online customers, whereas he admitted they were still ‘pretty crap’ at collecting information from in-store customers. But they are getting better, he added.

Mr James said that initiatives such as click-and-collect, along with its Pinpoint data-harvesting system – which combines online and in-store – was helping to drive customers in-store, where the conversation can be picked up and value added. Not to mention offering the potential to up-sell on products and accessories. 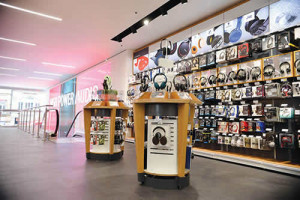 “I think we’re going to start seeing much of these guided journeys, with a much more active use of technology in-store to really understand what’s happening there,” Mr James said.

Another barrier to sales, the panel claimed, is delivery, with customer preference shifting to next-day and same-day delivery.

“It’s going to be very hard for Amazon to build an advantage in that space now,” explained Mr James. “I think customers realise that if you come and install something, show them how it works, set it up and test it, these are very valuable services. And we are finding that customers are more and more willing and able to pay for that.

“The trick is then to do it really well,” added Mr James. “We think that’s the new frontier. What we love is complex installations, so integrated kitchens, gas, anything that’s complicated we love, because Amazon can’t do it. And suddenly you’ve got no competition.”

When asked whether there is any real future for department stores, Anders Kristiansen brutally claimed: “There’s no future. [Laughter from audience]. Seriously, there isn’t. Unless you have a great, specialised high-end [store], like Selfridges or Harrods. But that mid-market, why should they exist?”

However, Mr James was less pessimistic, he added: “I think we’ve heard the death knell for various kinds of retail, but people find ways to reinvent it and come up with new ways of making it exciting and fun. I wouldn’t write it off just yet. I think some of the existing department stores are just s**t, but they don’t need to be.”

Mr James also admitted that a few years back, Dixons were a little worried about the combination of different technologies, such as GoPro, Sonos and smartwatches, shrinking the electronics market. But he said it found that the UK as a nation has a collective budget for electrical things that hasn’t changed much in 40 years, and he said he doubts it will change in the next 40 years.

Minister switches on more of Suffolk to DAB