Toshiba will be showcasing its new TV range, including a European 8K concept model, at this year’s IFA with its largest exhibition space to date.

Also on display will be next-generation TV designs, including a 65in ‘card-thin’ Wall Art model.

Toshiba will use IFA (August 31 to September 5), to launch its ‘lean back’ Smart Lounge Experience, featuring hands-free, voice-controlled TV and an ever-growing smart portal of online entertainment.

Said Toshiba’s European sales and marketing director Bart Kuijten: “With this showcase, we will not only be tapping into demand for the latest AV trends, but also highlighting additional possibilities for mainstream TV.

“The drive for ever bigger screen sizes and the consequent interest in richer pixel densities, as well as the need for HDR, are all vital for the ongoing success of the sector.

“However, so too is understanding the unique appeal of TV, which is its capacity to offer a viewer-ready, home-entertainment hub that does not necessarily depend on the use of secondary devices. For us, TV is an experience that we, as a prominent manufacturer, must invest in to keep relevant across Europe.”

Japanese brand Toshiba returned to the European market last year thanks to a licensing deal with Turkish OEM giant Vestel.

It has enjoyed a year of rapid growth, which saw the brand triple its sales in the UK, Germany, France, Spain and Italy.

Toshiba goes to bat for Edgbaston 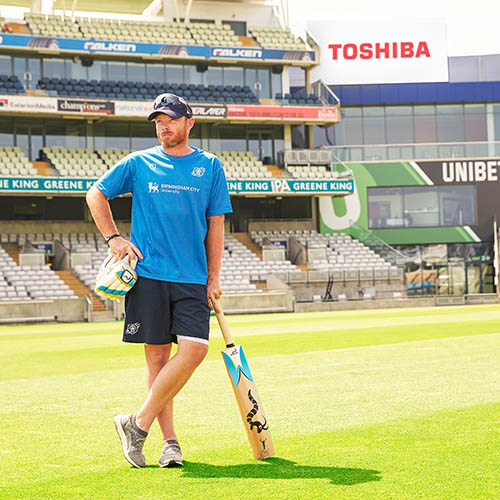 Toshiba recently announced it will be official TV screen partner of Edgbaston cricket ground in Warwickshire.

The brand will be visible throughout the venue, with permanent branding already on display across the stadium’s media centre.

Toshiba is also to have a major presence throughout some of the most highly anticipated international, as well as national matches, not only with big screen advertisements, but also with branded LED banners for several Test and T20 matches.

The sponsorship deal will also be supported by a digital promotional campaign and social media activity.

Toshiba will be offering all its social media fans the opportunity to win match tickets and a meet and greet former England and current Warwickshire County Cricket Club player Ian Bell (pictured).

Commenting on the deal, Toshiba TV’s sales and marketing director for northern Europe, David Flintoft, said: “Part of our summer of sport initiative, this partnership is a great opportunity for us to reach out and engage with local sports communities as well as international and national fans.

“As the official TV screen partner of Edgbaston, we’re not only bringing the sport to more viewers through ‘must-see’ content, but also through our parent company Vestel, which has just supplied more than 100 TV displays for the stadium.”

Hoover will reveal its vision of the future at IFA