The ‘kitchen of the future’ is already here

Research reveals the futuristic tech that’s set to transform our homes is in fact, already here, even though the general public don’t know the full extent of it yet.

The new research comes from a study conducted by domestic appliance manufacturer, Hoover.

When asked which technologies they felt would most likely feature in kitchens one year from now, respondents to the Hoover Innovation Survey 2018 voted sensor taps (33 per cent), connected and smart kitchen appliances (30 per cent) and robotic cleaning appliances (24 per cent) as the top three.

However, 31 per cent of people still thought that it would take more than five years until connected and smart appliances appear in the home.

The findings reveal that there is a real gap between the level of technology people think is available, compared to what actually is.

Most surprisingly though, the top three technologies voted, by respondents, to be available a year from now, are already on the market. From connected washing machines to robotic vacuum cleaners, AI technology has firmly made its way into household appliances. 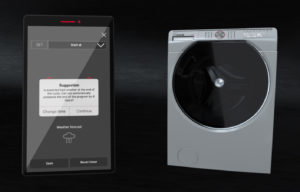 Hoover’s AXI collection (pictured), for example, launched in June and marked the beginning of the next generation of domestic appliances, complete with Artificial Intelligence – so you can talk to the washing machine and ask it for stain removal advice.

The features respondents felt would be most beneficial in future kitchen appliances were ease of use (29 per cent) and efficiency (24 per cent). When asked, 23 per cent of people chose a connected or smart kitchen appliance as most likely to improve their lifestyle than any other kitchen technology, while 30 per cent said robotic cleaning appliances.

“As the brand which launched the UK’s first collection of connected appliances in June 2015, our ongoing mission is to lead the way with smart models. Since 2015 we have made a concerted effort to ensure that our latest smart models offer true benefits to people’s lives, by learning and adapting to provide bespoke solutions to daily problems with household chores.”

All results from the Hoover Innovations Survey.