Located in the Seven Dials area of the city, the store has been designed to replicate a home environment.

The store will also host an ongoing line-up of listening events, screenings, cultural talks and installations.

The first of these events celebrated the life of the late David Bowie. To mark the release of the brand’s first voice-activated speaker, Sonos said it wanted to “honour Bowie’s unique voice” by collaborating with cultural commentator Paul Gorman to curate a display of rarely seen images of Mr Bowie’s London life.

These images were taken by photographers including Mick Rock, Brian Duffy, Rolf Adlercreutz and Mike Maloney. 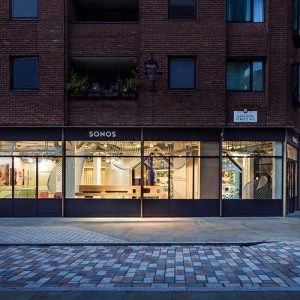 Said Whitney Walker, general store manager at Sonos: “The entire store experience is based on the idea of being in a really comfortable and inspiring environment. We’re proud to be opening our first European concept store in London, providing a dedicated space for music fans to create, connect and, ultimately, discover the best ways to listen to music out loud.

“We have carefully considered how people bring music into their home environment through curation, and used it within the concept store to pay homage to the great city of London and the culture that was born here and continues to inspire the world.”

Sonos plans to open more European concept stores, including one in Berlin in 2018.

We’ve had some big lessons to learn, says BSH