Smeg, the Italian cooking brand, has been awarded several prestigious Good Design Awards… with not one… but eight of Smeg’s class-leading appliances bestowed with the esteemed mark of excellence.

The appliances that scooped awards were Smeg’s new 120cm free-standing Portofino cooker with double cavity set to be unveiled later this year, its new Linea built-in WiFi connected Wine Cooler, alongside the new sous vide vacuum drawer, coffee machine and 90cm wide oven from its class leading Dolce Stil Novo built-in collection – all of which were recognised for their technology in the field of home appliances.

Also receiving recognition from Smeg’s range of iconic retro-style small appliances was the TSF03 toaster and DCF01 Drip Filter Coffee Machine – both of which were launched in December to great acclaim. 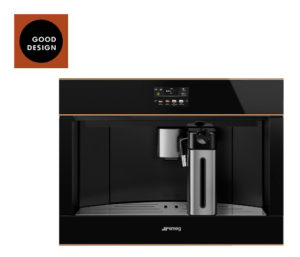 Smeg has been producing and crafting design-leading appliances for over 70 years and this is the eighth time the style and functionality of Smeg’s appliances has been recognised by the jury – a mark of the brand’s stature within the industry.