PMC supports live music though sponsorship of The Stables

PMC has reinforced its commitment to nurturing music talent and live music through sponsorship of the legendary Milton Keynes music and education venue, The Stables.

Founded by John Dankworth and Cleo Laine (pictured below) in 1970, The Stables was originally housed in the old stable in the grounds of their home. Popularity grew quickly and the venue hosted around 50 concerts in its first year. Today it features over 350 concerts a year and around 250 education events, which include the National Youth Music Camps. 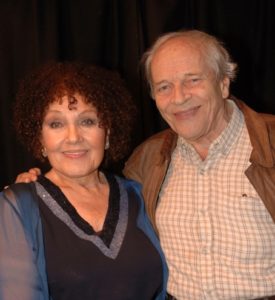 PMC has equipped the recording studio facilities at The Stables with its professional monitor speakers and, throughout the theatre, it has installed its wafer2 on-wall speakers to ensure the playback of music in the communal areas is of the highest quality and sounds every bit as good as the live music events. PMC has has also undertaken to be the sponsor of tickets for the venue’s upcoming events.

Speaking on the importance of supporting live music, PMC’s founder and owner, Peter Thomas, said: “I’ve long been a regular visitor to The Stables and value the tremendous variety of artists they present and the hugely important education work they do. The late John Dankworth was, and Cleo Laine still is a big supporter of live music and music education and I am extremely proud to be able to add PMC’s name to the fantastic work done by the team at The Stables.

“It’s only by keeping music education at the fore and presenting live music that the hi-fi industry exists, so it is vital that we as an industry play our part in supporting the work of facilities like this.”