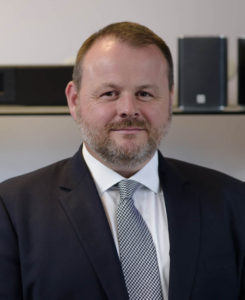 Owen Watters, CEO of Roberts Radio, has left for new opportunities after 14 years with the business.

During this time, Mr Watters has been an integral part of the Roberts business and under his leadership has achieved, and continues to maintain, the number one position in the radio market.

As a staunch supporter and guardian of Roberts’ unique and special brand, Mr Watters has enjoyed many successes, including securing prestigious industry awards, notably being granted ERT Brown Goods Supplier of the Year on three consecutive occasions, alongside a large number of key product awards.

He has been a prominent and vocal figure within the radio industry and a passionate contributor to Government bodies and industry panels on the Digital Switchover debate and the future of radio. His guidance and stewardship has also enabled successful renewal of Roberts’ Royal Warrants, a huge honour for the company.

Robin Van Rozen, CEO, Glen Dimplex Consumer Appliances, commented: “I would like to take this opportunity to thank Owen for his committed and loyal service to the business and wish him much success for the future.”

Mr Van Rozen will act as interim CEO for Roberts during this transitional period.