Which?: appliance makers must use fireproof labels

Faulty white goods that cause fires in people’s homes have become more difficult to identify, according to new research by Which?

A Which? analysis of the most recent UK fire data (2016/17) has revealed that 3,203 were caused by appliances, including washing machines, tumble-dryers, cookers and refrigerators.

Which? argues that this makes it more difficult for authorities, such as Trading Standards and the Office for Product Safety and Standards (OPSS), to hold manufacturers of unsafe products to account.

Which? is now calling on manufacturers to use fireproof labelling on all of their appliances, so that unsafe white goods can be identified and removed from consumers’ homes. 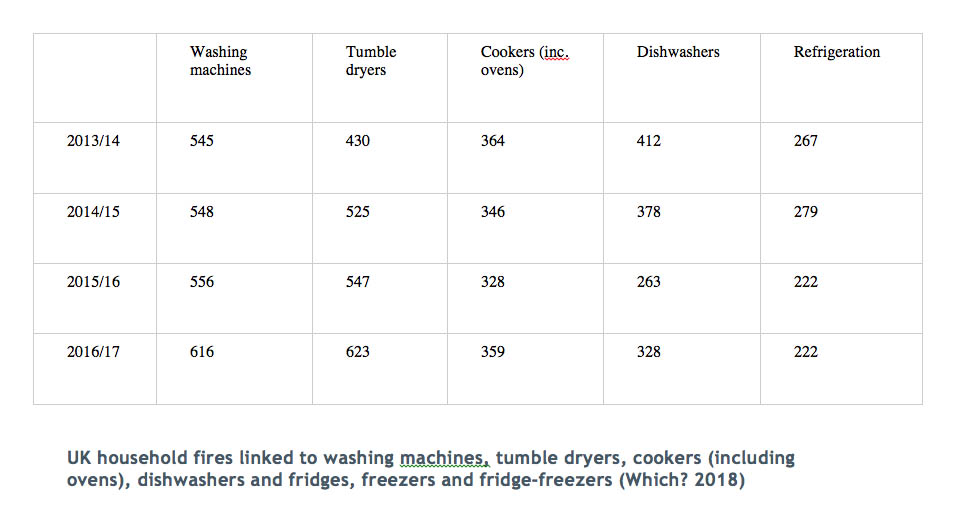 Alex Neill, Which? managing director of home products and services, said: “The number of fires caused by faulty washing machines, tumble-dryers and fridge-freezers has stayed shockingly high for a number of years, but our research shows its getting harder to identify the make and model of the appliance in the majority of instances.

“The Government must set out in its forthcoming product safety strategy how it will ensure that manufacturers use fireproof labelling on all of their appliances, so that identified dangerous white goods can be quickly removed from people’s homes, and potentially save lives.”

Appliance trade association Amdea has in the past called into question Which? interpretation of the official fire statistics as not sufficiently reliable to make any conclusive claims against appliance manufacturers.

This is because, the organisation has said, that an attending fire officer will often leave blank the field in the paperwork requiring the brand of the appliance that may have caused the fire because of other urgent priorities at the scene.

An Amdea spokesman said that, as part of its continued commitment to safety, Amdea will be discussing the statistics with the Home Office.

“We constantly work with the fire services to look at incidences related to appliances and according to our own analysis, appliance-related fires have dropped 10 per cent since 2012-2013,” the Amdea spokesman added.