The first display area will open in September in the Oxford Street store and the concept will be rolled out to the Birmingham and Manchester stores in October.

The deal will also include two LG OLED window displays in the Oxford Street store for one week, starting on September 24, plus LG branding on car park light boxes and a store walkway.

Dawn Stockell, head of brand at LG Electronics UK, said the ambition for the move was to “help drive further awareness of LG outside of the technology department in Selfridges”. 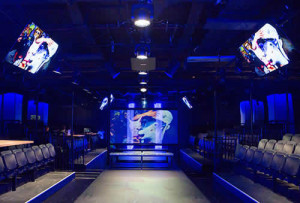 As part of the campaign, LG has sponsored the Selfridges Shakespeare Refashioned Theatre, which includes the use of its OLED TVs in the performance space and around the store, which according to the company “demonstrates to customers LG’s latest technology in action”.

Performances of the Shakespeare play Much Ado About Nothing will run until September 24.

Ms Stockell added: “As we prepare to unveil the new display areas, the LG OLED branding in the theatre space, as well as throughout the store, will ensure LG is front-of-mind with Selfridges shoppers who are looking for the very best in technology.

“The opportunity presented was a unique proposition to showcase our OLED technology within an iconic, premium store in London, twinned with the celebration of an iconic writer. The timing has also supported the launch of our award-winning 2016 OLED models, plus the front window display lands, as we start the run-up to the key Christmas sales season, so LG technology will be front-of-mind with customers considering gifts or technology upgrades.”

As part of its ongoing campaign, the electronics giant has previously partnered with the Chelsea Flower Show to create the LG Smart Garden, which featured the new LG Signature TV, and took on the lead partnership of the Natural History Museum’s Colour and Vision exhibition using its OLED technology.