The futuristic showcase featured 25 LG XBOOM AI ThinQ Smart Speakers playing the music from an incredible line-up of talented musicians. The performance was hosted in Leeds at the Variety Theatre and attended by a lucky group of music lovers.

LG worked closely with Leeds College of Music to individually record 25 musicians playing a variety of instruments within the ensemble. Each separate recording was then streamed using Wi-Fi and Bluetooth to its own designated speaker. This allowed the conductor to voice command the entire AI orchestra, creating an incredible symphony.

“We were really excited to have the opportunity to partner with LG on this project, and to be a part of the first ever AI orchestra,” said James Warrender, Enterprise Manager at Leeds College of Music. “It was so interesting to see the process of how the show came to life, from recording both songs, to setting up the speakers and ensuring they all came together seamlessly. I was blown away by the final result and thought the LG XBOOM AI ThinQ Smart Speakers did our musician’s beautiful work proud. It’s such a unique concept for a campaign, and it has been fantastic for the whole team to work on.” 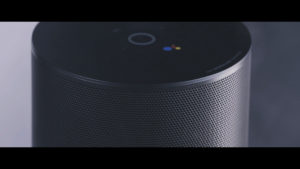 The LG XBOOM AI ThinQ Smart Speaker is a culmination of LGs incredible audio technology, designed to be smart without losing its fantastic sound quality. In order to create the best audio quality LG has partnered with MERIDIAN, pioneers of high-resolution audio, to create the highest quality crisp and well-rounded sound. LG also collaborated with Google on the Smart Speaker to integrate the Google Assistant directly into the product as a home hub which consumers can connect to other Google Assistant enabled products.

Carolyn Anderson, Marketing Director, LG Electronics, added: “When we started this project, we realised it was an ambitious task to create the first ever Google Assistant AI orchestra, but we are thrilled by the final performance. It was wonderful to work with Leeds College of Music and their talented musicians to marry their expertise with our technology to bring this symphony to life. This is an exciting time for LG, and projects like this demonstrate the possibility of our technology.”

To find out more, visit: www.theworldsfirstaiorchestra.com