Specially trained members of staff will demonstrate to consumers how smart devices can benefit their lives.

John Lewis plans to open another smart home technology experience at its new flagship Leeds store in autumn 2016. It will also roll out similar smart home areas in ten of its stores across the UK. 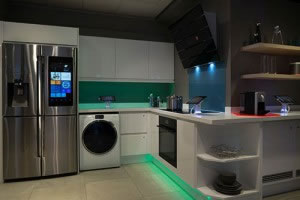 John Lewis is predicting that the smart home market in the UK will grow by at least 450 per cent over the next four years.

The opening of the smart home experience area in its Oxford Street store is a response to an 81 per cent increase in sales of smart home products in the last year at John Lewis.

Speaking exclusively to ERT at the opening of the new smart home space, Johnathan Marsh, buying director for electricals and home technology at John Lewis, said: “We recognise that most of those sales thus far have been through our early adopter customer base – tech-savvy consumers who have to have the latest thing. Now we want to take that out to the mass-market and demystify some of the preconceptions that exist around the smart home.

“What we’re trying to do is to recreate how the technology will look and work within your home. That’s where John Lewis has a unique role to play. We can actually showcase to our customers how it will work in a home environment and take them on a journey, so they can see that it’s much more simple than they realise. There’s still an awful lot of uncertainty around what the connected home – or the smart home or future home – means. I think it’s our role to really bring it to life for our customers.”

Describing the smart home as a ‘technology revolution’, Mr Marsh said: “We want to lead – we don’t want to wait. Given the home credentials that John Lewis has, I think we are perfectly placed to lead – and own – this space.”