Have your say on who wins at the 50th TRIC Awards

This year, TRIC, the Television and Radio Industries Club, celebrates 50 years of the TRIC Awards.

To mark this momentous occasion, the Club has partnered with ERT and is offering readers the opportunity to cast their vote for a second year running to nominate their favourite TV and radio programmes and personalities. Voting launches today and will be live via the ERT and TRIC websites until Friday, 25 January.

Simply follow the link to the voting page and select your favourite shows that you enjoyed in 2018 – whether it’s crime, drama, entertainment or factual – as your vote counts towards who wins the prestigious TRIC gong at the star-studded Awards ceremony in March.

What’s more, TRIC is giving ERT readers the opportunity to win five pairs of tickets to attend the Awards ceremony, so if you’d like to bolster your table with an additional two free seats then get voting.

This ultra glamourous ceremony will take place on Tuesday, March 12 at Grosvenor House on Park Lane in London. To celebrate with our nation’s favourite celebrities, click here to book the remaining tables. 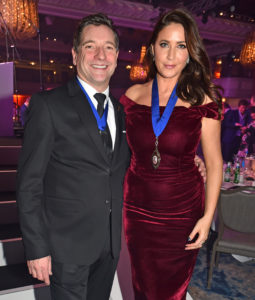 Richard Lindsay-Davies, TRIC Chairman (pictured left with current TRIC President, Lisa Snowdon), said: “2019 is a huge year for the Club, marking 50 years of the Awards, and we’re delighted that ERT is working together with us for another year. It’s the perfect partnership for the Club as it provides us with an opportunity to further strengthen our relationships in the industry.

“Last year our objective was about change; our partnership with ERT and the input from TRIC President, Lisa Snowdon, was integral to getting us ready for our 50th year”.

Jack Cheeseman, editor of ERT, added: “We are very excited to once again be partnering with TRIC, especially during such a milestone year for the Club. We all have our favourite TV and radio shows that we enjoy watching or listening to in our spare time and this is the perfect opportunity to reward all the hard-working people involved in these productions, so I urge everyone to get voting! And I’m looking forward to seeing the winners revealed in March!”

TRIC’s aim is to promote mutual understanding, goodwill and networking amongst those engaged in the technology and related industries, by holding high-profile events, and in doing so to raise money for the good causes nominated by TRIC. This year TRIC’s chosen charities are Variety, the Children’s Charity and Breast Cancer Care.

TRIC’s continued success and growing reputation for unrivalled corporate entertaining provides a tremendous springboard to industry networking and collaboration in the build-up to its 50th year.

For further information on TRIC events or the Awards, please contact Alexia Sciplino on 020 3476 7159 or visit www.tric.org.uk