Half of buyers can’t use smart tech, says survey More than half of Brits who have purchased smart-home technology for their homes have little idea how to use it and more than a third regret buying it, according to new research by field marketing agency Gekko.

The Smart Home Shopper report investigated the smart-home purchasing behaviour of 1,000 UK shoppers aged 18 and older. It found that 56 per cent had bought the latest must-have, smart-home technology, including wi-fi security cameras, heating systems and speakers, but had been left scratching their heads when they got them home.

Three-in-10 consumers regretted buying at least one or more items of smart-home technology because it proved so difficult to get up and running.

Nearly a third said they never read the instructions or manual when they bought a new piece of kit, while 21 per cent admitted that although they had a love of tech, they were intimidated by the complexities of it.

Thirteen per cent of consumers who had invested in smart-home technology said they couldn’t get all their devices to connect – which is the whole point of having a ‘smart home.’ More than one-in-10 had used a piece of smart-home tech once and never again.

The trickiest bit of kit to install, the survey revealed, was security equipment (45 per cent), including app-controlled doorbells, motion sensors and CCTV, however 28 per cent said they couldn’t get their smart lighting to work and 35 per cent came unstuck when installing their smart heating system.

Twelve per cent claimed poor wi-fi connections made installation difficult and 15 per cent confessed to lacking any technical ability.

Just under a third (30 per cent) said that they had purchased a smart speaker, such as the Amazon Echo or Google Home, and didn’t understand all its functionality.

Those people that bought their smart-home technology from a bricks-and-mortar retail store did so to play, touch and feel the product (40 per cent), get advice from sales staff (30 per cent) and a demonstration (30 per cent). 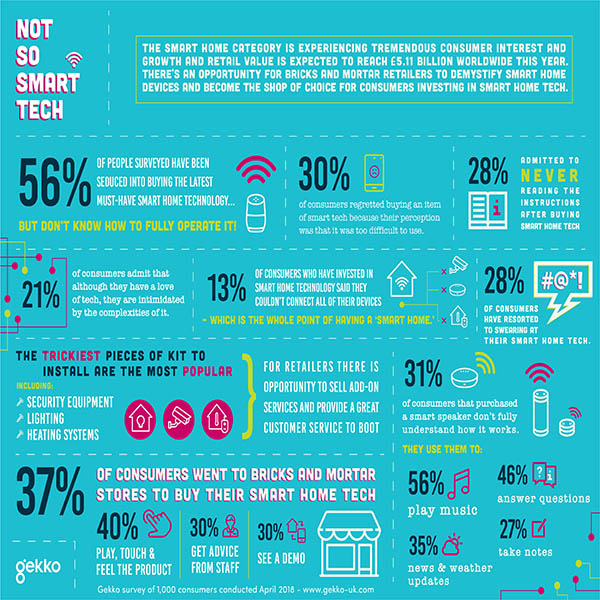 Said Daniel Todaro, managing director of Gekko: “It’s clear from our study that smart-home tech is popular, but people don’t know how to fully use the devices to meet their lifestyle needs – whether that’s convenience, money saving, leisure time or learning.

“This is a great opportunity for retailers, especially bricks-and-mortar, to improve the customer experience within the smart-home tech category by having an environment where consumers can ‘play’ and a retail team that understand each product in detail and can match consumer need to product performance. By solution selling it’s a win-win for the customer and the retailer – the retailer can enrich the sale by demonstrating the whole product portfolio and functionality and the customer gets a product that’s fit for purpose.”

He added: “Traditional retailers have never been under so much financial pressure to adapt to today’s market conditions, so they must use what they’ve got to make every customer visit worthwhile.”

Other key survey findings were: