Retail guru Bill Grimsey has warned in his latest review of the state of our high streets that “if we don’t act now, current [retail] models will no longer have any real purpose and will be consigned to the dustbin of history”.

He hints too that retail may no longer be the mainstay of tomorrow’s reshaped high streets, which will be more of a social and community hub for people to meet and interact socially.

The Grimsey Review 2 follows on from his last investigation into retailing in the UK back in 2013. The retail crusader has a strong retail background as a former CEO at Iceland and Wickes and has held senior management positions at supermarket chains Tesco and Budgens.

His latest report comes in the wake of many high-profile casualties like Maplin and rounds of store closures from household names such as Carphone Warehouse, House of Fraser and Marks and Spencer. “Barely a week passes,” the report said, “when another major chain has not announced it will be downsizing, shutting hundreds of stores and putting thousands of jobs at risk”.

The new report highlighted how, over the past five years, the retail landscape has changed “irrevocably” because of the convergence of changing consumer behaviour driven by technology, an archaic business rates system and prevailing economic conditions, made worse now by uncertainty over Brexit.

The report pointed to the technological revolution as one of the disruptive factors, blurring the boundaries between the real world and the technological world. And although it highlighted that 85 per cent of retail spend touches a physical store, it added that online sales in the UK grew from £360 billion in 2013 to £406bn in 2017. 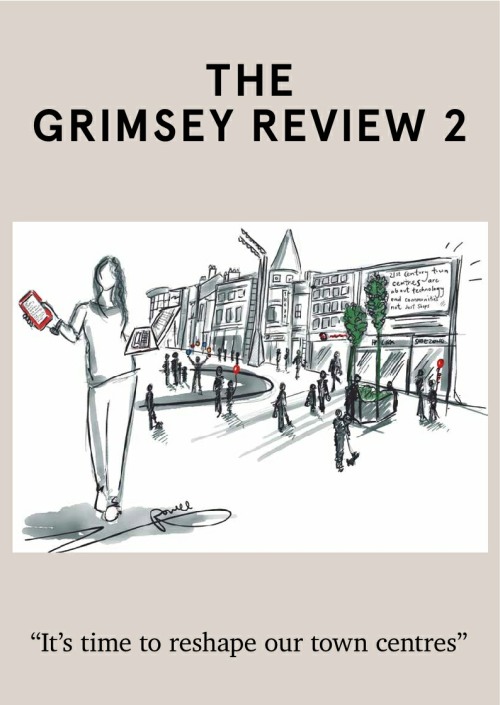 It struck a positive note, however, saying if we recognised this “technological disruption” and “recalibrated our high streets and two centres, so that they are resilient to change, then there are very good reasons for optimism”.

But before that can work, the Grimsey report pointed to other factors that are against retailing in the UK.

Rising costs for retailers are one. Business rates are a major focus for the report, not to mention wage and transport increases. Costs for retailers, it said, have risen by faster than sales growth  ̶  2.9 per cent against 1.9 per cent. And internet sales have doubled in the past five years, whereas retail sales have increased by only 12.7 per cent. Thirty per cent of all retail sales, it added, would be online by 2030.

Business rates, it said, have grown into a “massive tax collection vehicle for government” and called for this “outdated and unfair” tax to be replaced.

The report suggested that the role of the high street needs to change to become more a place where people meet, gather and have a great experience. Retail must adapt to this change and it cited Apple’s plan for ‘town square stores’ as a good example. “If Apple gets it,” it said, “why can’t we?” Adapting to this is the key, and the report warned: “We still rely on old models not fit for the 21st century. There is no point clinging to a sentimental vision of the past. We have to start planning for a bold new world.”

So what does it suggest are the key elements for this bold new world of retailing?

Clearly, business rates reform is one. Parking is another and the report suggested creating a nominal charge of £1 for the first two hours in town centres, including free parking for the first 30 minutes.

It also highlighted how new technology  ̶  Virtual Reality and Augmented Reality  ̶  had a key role to play in improving the retail experience. It also suggested having a rewards scheme on an app for people to put on their mobile phones, which would offer customised rewards and incentives.

To facilitate all of this, the report recognised the need for establishing empowered Town Centre Commissions to help oversee the transformation of town centres into spaces where people come for a complete social experience, as well as a national body to share best practice and giving local authorities the power to penalise landlords who allow empty shops to stand vacant for longer than six to 12 months.

Citing statistics that clearly show that there is an exodus of “comparison goods” stores (white goods and electricals, fashion and footwear) from town centres to retail parks, the report said we must accept that “there’s already too much retail space in the UK and that bricks-and-mortar retailing can no longer be the anchor for thriving high streets and town centres”.

But the report does strike an optimistic note when Mr Grimsey concluded: “The entrepreneurial dynamism that drives our sector continues to burn brightly. But retailers are no longer operating in an environment that supports and nurtures innovation. But there is cause for optimism if we recalibrate our high streets.”

The final conclusion was: “The 2013 report warned of a crisis unfolding and that action was needed. Thousands of retail jobs have been lost since and the response by politicians has been abject. Unless drastic action is taken, things are only going to get worse.”

Commenting on the new Grimsey report, Jat Sahi, digital lead retail EMEIA at Fujitsu, said: “The various closures and cutbacks that have dogged the high street lately demonstrate how retailers need to rethink their bricks-and-mortar presence in the age of e-commerce. Consumers have become accustomed to the seamless convenience of shopping online, and this latest report underlines how some retailers have been unable to match that experience in-store.

“Designing town centres as community hubs could actually prove positive for retailers, as having such attractions nearer stores would very likely keep a retailer front-of-mind for consumers and make them more likely to be visited. Retailers will however need to prove their value if they are to compete with more varied tenants for their shop space.

“This will require them to maximise their retail space to create an easy and delightful experience for customers. Deploying technology in smart ways offers a means to do this – according to our own research, four-in-five Brits would spend more in a shop with a better technology experience. Despite this, only half of retailers have a digital strategy to implement the kind of technologies that could boost the browsing and shopping journey.”

Mr Sahi concluded: “If cities and towns do take up these recommendations, it will be absolutely vital for those still on the high street to maximise their already reduced presence. But regardless of this, with consumer confidence trending downward, competition is fierce and both customer loyalty and shopping experience are weighing in.

“If they can avoid being the next generation of retailers to be pushed out of the high street for good by deploying technology in a visionary manner, they could be looking forward to consumers being physically much nearer to them which could be a renaissance for the high street.”

New CIH warehouse for the North of England