Organisers have declared the inaugural Styl:us show at Heathrow last weekend a success.

Styl:us was aimed at people who love music and have embraced the resurgence of vinyl and was billed as the UK’s only dedicated analogue music event.

Held over the weekend of April 23-24 at the Park Inn near Heathrow airport, the show was organised by The Chester Group, which also runs the National Audio Show at Whittlebury, as well as hi-fi shows in Australia, Canada and the USA.

Chester Group chairman Roy Bird told ERT after the show that he was particularly pleased with the number of visitors.

Mr Bird said: “Launching any new show anywhere in the world is a very serious undertaking and is fraught with risk, even more so if that new show – Styl:us – is a niche within a niche. So yes, we consider that this show was successfully launched.

“We judge that success two ways: feedback back from exhibitors and how many rebook for next year. Over 50 per cent of exhibitors have rebooked for 2017.”

Mr Bird confirmed to ERT that Chester Group would be running Styl:us again in 2017. “One-off events are not our game,” he said. 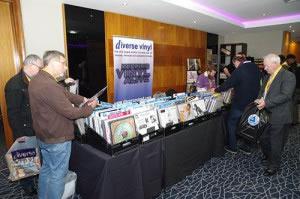 He suggested that Chester Group might consider an earlier weekend for next year, but that there were no firm dates as yet. It is also looking at the possibility of staging a second Styl:us show “in the North”. He added that Chester Group’s two main objectives for 2017 would be to maintain the quality of attendance and increase its marketing via the trade press.

Mr Bird concluded: “We are quite sure that the invigorated vinyl culture is here to stay as are our ambitions to expand and improve the show to come even more in line with our original concept.

“This is very important to the future success of this show, and we are not waylaid by commercial pressures that distort that objective. We’ve now made ourselves a sound platform to work from.”

ERT caught up at the show with Phil Hansen, director of The Clarity Alliance, which co-sponsored the event. He said: “The first ever Styl:us show achieved its objective of offering a vinyl-focused event to the music lover. It presented them with a range of vinyl playback options from extremely cost effective and affordable products, for those beginning their vinyl journey, to high-end propositions for the very committed and serious hi-fi enthusiasts.

“The reaction of show-goers was one of undoubted enthusiasm, with two completely full houses for Alan Sircom’s turntable set up seminar – a beginner’s guide to setting up a turntable to get a good musical performance. My conversations with exhibitors were also very positive, with the great atmosphere of the show often commented on.”