ERT teams up with TRIC ahead of star-studded Christmas Lunch This is the last chance to book your tickets to the final, but undoubtedly one of the most glamourous, industry events of the year – the TRIC Christmas Lunch.

ERT has been announced as the trade media partner for TRIC for 2019. As a result, Christmas has come early for ERT readers as there is special 25 per cent discount off tickets for the star studded Lunch, hosted by TRIC President, Lisa Snowdon, and TRIC Chairman & CEO of the DTG, Richard Lindsay-Davies (both pictured below).

With an amazing array of entertainment lined up, including Cassidy Janson from the Leading Ladies and hit musical ‘Beautiful’; celebrity magician, Michael Gee; Christmas carols from Classical singer Katie Marshall & The Salvation Army; and of course the infamous raffle will once again be taking place, which will be raising money for two charities, Breast Cancer Care and Variety, the Children’s Charity. 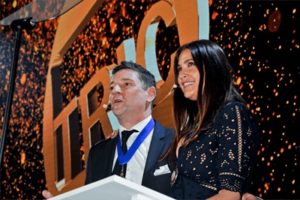 Next year is a huge milestone for TRIC – The Television and Radio Industries Club – as it will be celebrating 50 years of the TRIC Awards, which take place in March. TRIC has chosen to work together with ERT as its trade media partner and to kick off its 50 years of the TRIC Awards the Club is inviting readers to have an opportunity of experiencing a truly unique and wonderful day out to network with our nation’s most loved celebrities and everyone in the industry that makes television and radio possible.

For further information on TRIC, please visit www.tric.org.uk, and to take up this offer for the Christmas Lunch please contact TRIC at alexia@tric.org.uk and quote ‘ERT’ in the subject line, or call directly on 020 3476 7159.

TRIC was formed in 1931, established in the early days of broadcasting as the ‘Radio Industries Club’. The aim of TRIC today is to promote mutual understanding, good will and networking amongst those engaged in the technology and related industries, by the holding of high-profile events, and in doing so to raise money for the good causes nominated by TRIC.

Sharp to exhibit at LivingKitchen 2019