ERT launches Turning Point campaign to save the indies A campaign to fight for the survival of independent electrical retailing was launched at the ERT  Turning Point Summit this week (February 2).

Leading retailers and suppliers came together for a series of frank and hard-hitting discussions on the key issues facing the industry.

The sell-out, one-day event, held at the techUK offices in London on February 2, was the first step in an ongoing campaign by ERT, which will call for closer cooperation in the electrical retailing sector and highlight what needs to change.

ERT editor Sean Hannam chaired the summit and the opening address was given by Andrew Davies, managing editor at Taylist Media, publisher of ERT.

In his opening speech, Mr Davies outlined how the independent electrical retail sector has been in decline over the past few years, but highlighted that, with the rapid rise of connected products and the age of the smart home, there is a need for specialist retailers.

Said Mr Davies: “Our industry is at a turning point. Technology has reached a point where it needs experts to guide consumers more than ever before, but those people best placed to provide that expertise are struggling or closing.

He added: “To begin to address this problem, everyone has to start by asking themselves some difficult and very introspective questions

“If you’re a supplier, do you really believe that a vibrant and thriving independent sector is essential for the long-term growth of your business, or are you paying lip service while managing the inevitable decline that you see as out of your hands?

“If you’re a retailer, have you honestly done everything you can to adapt and change your business as the market has changed, or have you found it easier to keep plugging away as normal, hoping to last just long enough to reach retirement, while blaming suppliers, the internet, John Lewis and your local council’s parking policies?”

The state of the market was outlined by analyst GfK’s account director, retail world, Paul Carrington, who said that independent retailers’ value share of the consumer electronics market had shrunk by more than half over the past six years. According to GfK data, in 2010 they had 20 per cent of the market – in 2016, independents accounted for nine per cent.

Issues raised at the conference included how suppliers should invest in and support the independent channel, the need for shop-based retailers to have a second speciality, ways suppliers can help retailers with marketing skills and activity, the opportunities that the smart home can provide and how retailers need to stay relevant.

Speaking at the summit, Robert Hughes, managing director of retailer Hughes Electrical, said: “You have to make the web integral to what you do. If you haven’t got a fully-formed internet strategy that complements and supports your shop, then you’re going to struggle in the future.”

Commenting on the need for retailers to have a second speciality, Mr Hughes said: “You’ve got to look at the products we sell as a means to something else – if you don’t have that something else, I think you’ve got a problem. For us, 40 per cent of our group turnover is coming from sales to consumers in shops – that is the only part of our business that’s struggling. The other 60 per cent – whether it be the internet, business-to-business, smart home or rentals – is growing, but we need the 40 per cent to get the other 60 per cent. If you haven’t got the other 60 per cent, you’d better be a really good electrical retailer… I’m not confident that we’re good enough to survive just on straight electrical retailing. It’s important that you find that speciality and nurture it.”

Andy Griffiths, chief executive of Glen Dimplex Consumer Appliances, spoke about the role of the supplier and said brands should take responsibility for giving retailers the assets they need to work with.

He said: “Retailers need to make sure they have an online competency to complete the customer journey to be close enough to their consumers in 2017 and the way they interact and research and make their choices about their key electrical products. A lot of that can be channelled through joint activity with brands.”

Added Mr Griffiths: “Brands should give you [retailers] platforms to bounce off, so you can tailor it to your own business and make sure you have a particular story.”

He also called for independent retailers to get back to focusing on their core values – understanding their local market and servicing it.

Said Mr Griffiths: “You’ve got to reflect that in your product range and the brands that you work with. Whatever you do, don’t be ordinary.”

Taking part in a panel discussion on collaboration and what needs to happen in the future, Retra chief executive Howard Saycell highlighted the need for industry-wide qualifications and accreditation.

He said: “We need an industry approach. We need to identify the people that can survive and develop a plan to help achieve that.

“We need to fight our corner for the independents. There is lots of heritage there – many brands established themselves in independents and then went down the volume route.”

He called for brands not to turn their backs on independent retailers.

Mr Saycell added: “The big retailers aren’t good at introducing new technology. Customers are more likely to trust a local business that’s been around for 80 years. Smart home is a $35bn opportunity – if independents don’t ride the wave, then I’m very fearful.”

Guest speakers and panellists at the ERT  Turning Point were: 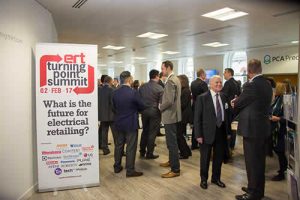 The event partners and sponsors were:

The March issue of ERT will be a Turning Point special.