Electricals were a ‘strong driver’ for retail sales in October, which saw the strongest growth since January.

The latest BRC-KPMG Retail Sales Monitor for October revealed that retail sales increased across all categories 1.7 per cent on a like-for-like basis from the same month in 2015, when sales dropped by 0.2 per cent over 2014.

In the three months to October, non-food retail sales, which included electricals, increased 0.6 per cent. This is an improvement on September, but is still below the 12-month total average of 1.4 per cent.

Online sales did best of all, with an increase of 11.1 per cent over the three months to October. While in-store sales continued to decline, with a 1.3 per cent drop on a total basis and 1.5 per cent on a like-for-like basis.

Helen Dickinson (pictured), British Retail Consortium chief executive, said: “October’s figures paint a more positive picture of retail sales, with an increase of 2.4 per cent on the previous year and reaching well beyond the three-month average of 1.1 per cent. There was a more balanced contribution from all product categories, nearly all of which saw a degree of sales growth.

“Electronics saw strong sales resulting from new product releases and was a significant driver of the month’s performance. This was compounded by international shoppers’ spending, which has soared since July as tourists take advantage of the weak pound to buy luxury goods at bargain prices.

“It is clear from today’s figures that, despite the inflationary pressure that’s gradually building in the supply chain, retailers are currently effectively managing the additional cost burdens and continue to entice their customers with great choice and value.”

Paul Martin, UK head of retail at KPMG, added: “It’s been a spooktacular month for retailers this October, with total sales up 2.4 per cent in the month – continuing the ongoing theme of UK shoppers being undeterred by the prospect of Brexit.

“With retailers already a third of the way through the golden quarter, and Black Friday weekend and Christmas looming they will be hoping to maintain momentum by capturing the attention of shoppers in the noisiest time of year.” 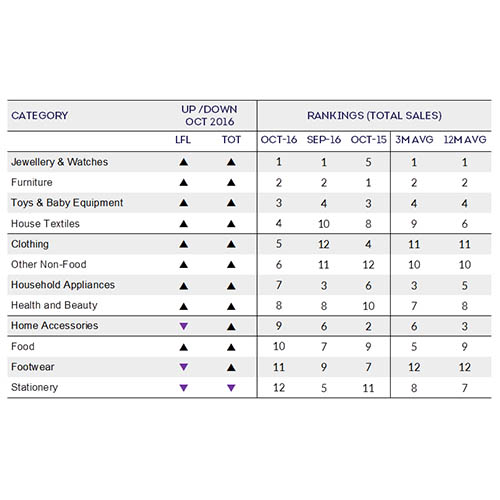