Electricals were a key driver for growth in online sales in October, new figures have shown.

The BRC-KPMG Retail Online Sales Monitor found that sales of non-food products in October saw an 11.1 per cent increase compared with the same month last year, when there was an increase of 9.2 per cent.

According to the British Retail Consortium (BRC), new product launches in consumer electronics were the key driver of online growth, increasing the other non-food category to second place on this month’s online ranking table.

The share of online sales for the other non-food category increased by 2.1 percentage points in October to 18.4 per cent.

In the three months to October, online sales of non-food products in the UK increased 9.3 per cent year on year, while total non-food sales grew by 0.8 per cent over the same period.

In October, online represented 22.2 per cent of total non-food sales in the UK, compared with 21.1 per cent in the same month last year. This is the tenth consecutive month that non-food online purchases have remained above 20 per cent.

In the past three months, online sales contributed 2.2 per cent to the year-on-year growth of total non-food sales, whereas in-store sales dropped by 1.4 per cent.

BRC’s chief executive Helen Dickinson said: “Online sales in October saw their best growth since July with an 11.1 per cent increase on last year and pushed ahead of the 12-month average of 10.8 per cent. This was largely driven by consumer electronics, for which online proved to be the shopping channel of choice, with attractive deals on existing stock and gaming enthusiasts enticed by new product launches.

“There are signs that the Christmas trading season is well under way. Online continues to account for a large proportion of non-food sales with over £1 in £5 being spent online. However, stores also made a positive contribution – the best since January.

“The choice and convenience provided to shoppers by digital channels have intensified competition over the years and will continue to do so. While retailers have succeeded to date in protecting customers from rising costs, online channels continue to become increasingly valuable as a source of information to the price-sensitive customer, against a backdrop of economic uncertainty.”

Paul Martin, KPMG UK head of retail, concluded: “October appeared to be an online shopping bonanza, with non-food sales up 11.1 per cent on last year – even better than last month’s results.

“With Black Friday nearing, November will mark one of the busiest online shopping periods of the year. Retailers will need to ensure they are poised to hit the ground running as shoppers log-in to snap a bargain.” 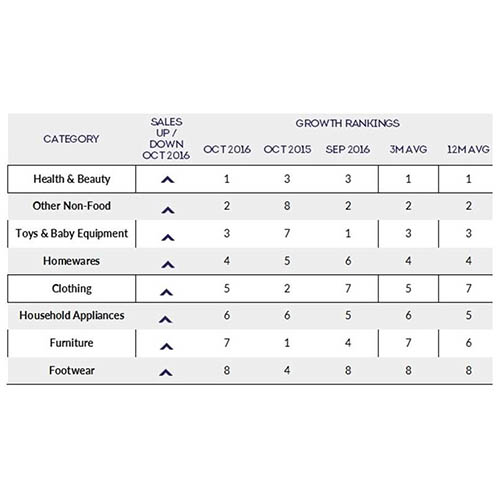