ERT Award-winning retailer Dacombes of Wimborne had a major presence at the town’s folk festival for the fifth year running.

The local independent retailer, which has been trading in the Dorset town for more than 100 years, had two gazebos at the Wimborne Folk Festival on June 8, 9 and 10. It made sure its name was front and centre by sponsoring one of the four main stages where acts performed live (see picture).

ERT’s Small Domestic Appliances Retailer of the Year for 2017 was supported at the event by Samsung, with a TV lounge set up in one gazebo to display its QLED TVs and soundbars. 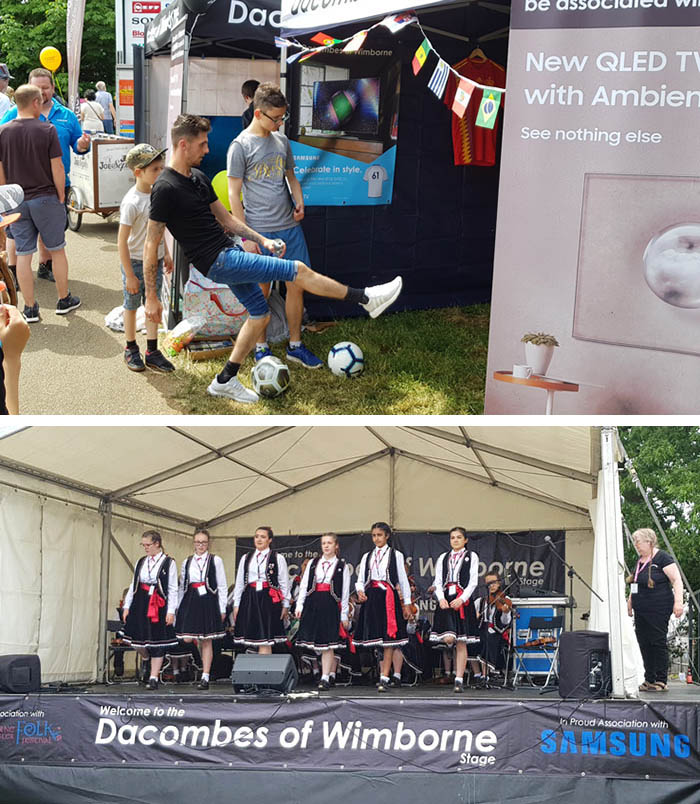 In the second gazebo, Dacombes staged a penalty shootout competition with a prize for the most goals scored of a World Cup football shirt.

Said Dacombes managing director Matt Renault: “This is the fifth year running that we have supported this local event. We like to support local events and give something back to the community. The Festival seems to be getting bigger every year and more and more people are attending. Last year there were around 25,000 people there.”

And it’s not just about selling products, although Mr Renaut said there were special deals available on the day. “It’s lots of fun. It has a lovely family atmosphere. The staff enjoy it and it’s a good way to see existing customers again and meet new ones.”

Give them something online shopping never will