Warranty provider Domestic & General has announced the winners of its 2016 Retailer of the Year Awards.

This year’s winning independent electrical retailers were Gillmans, Gloucester; Stellisons, which has nine stores across Kent, Suffolk and Essex, and Hughes Electrical online.

In what is said to be the UK’s biggest consumer survey of independent electrical retailers, over 250,000 customers were asked for feedback following a major electrical purchase such as a TV or washing machine.

Now in its 17th year, the survey is designed to reward the very best customer service within the UK’s independent electrical retail channels.

In this year’s survey, over 1,000 high street shops and online retailers were rated on key areas including store presentation, product information and customer service.

Awards were presented to the retailers with the highest scores, across three categories: independent, multi-site and online. 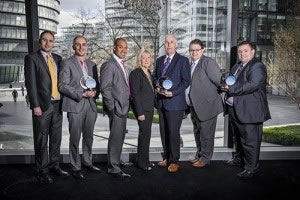 The awards were presented to the winners by Domestic & General sales director Kam Kandola at a ceremony in Tower Bridge, London.

Said Mr Kandola: “Domestic & General is proud to recognise the hard work and commitment that is demonstrated by the winners of the Retailer of the Year Awards, especially during such challenging times, with market forces dictating the way they operate.”

He added: “We have supported retailers for many years, endeavoring to support them with post-sale products that can add revenue and drive customer satisfaction. This will continue into the future, as we move to a market where customers expect choice and flexibility from their protection plan.”

Said Hughes ecommerce director, Simon Cox: “Hughes is delighted to receive the prestigious Online Retailer of the Year Award. It makes the hard work worthwhile when our customers vote for us.”