Audio-Technica EMEA chief executive Robert Morgan-Males tells Steve May about the new headphones it was showing at IFA, how it’s increasing its share of the turntable market, and what AI and voice-control mean for the future

The new Audio-Technica EMEA chief executive has a right to feel at home – the Spiritland sound system uses Audio-Technica cartridges and there are microphones by the company in the two resident recording rooms.

Even the recent GfK revelation of a five per cent decline in the turntable business hasn’t been enough to faze him.

With IFA 2018 providing a compelling showcase for the brand, ERT thought it high (fi) time for an in-depth chat with him…

Q: So what do you make of the reported decrease in sales of turntables?
Robert Morgan-Males: I’m not concerned about the drop. The bubble has burst, but the nature of the buyer is consolidating, and we’ve increased our market share. Year on year, the market may be down by five per cent, but it’s low-value, high-volume products that have seen the decline. That was the big bubble that got everyone talking in the first place, but now the market is changing dramatically, from the type of products being sold to the type of buyer looking for vinyl.

As a value-driven manufacturer, we’re actually seeing our market share increase. Audio-Technica is now number three in the UK, up from five last year. In Germany, the turntable market has increased by 25 per cent, while in France it’s increased 45 per cent. That’s huge.

Q: So you don’t think the GfK figures indicate a more significant loss of traction?
RMM: For those involved in consumer specialist hi-fi, it’s a jolly good thing. We have the software now. Vinyl is back in production. The headphone market still shows growth, with some 80 per cent shifting to wireless. Smartphones are getting better.

With our ATH-DSR7BT over-ear wireless headphones, we created a far better Bluetooth wireless experience for consumers. We’re one of the very few manufacturers who create a new transducer for every new headphone we manufacture, and that requires a lot of resources… but then, we have years of expertise.

Q: The company is 55 years old. It began with phono cartridges in the Sixties, headphones were added in 1974 and microphones in 1978, and has been a tireless advocate of analogue audio. What do you think makes it such a timeless brand?
RMM: We’ve stayed close to our founder’s original message: whatever price point you touch with the product, you end up with a great quality experience. We’re number one in headphones in Japan, and have been for nine years. Our professional products – studio microphones, smart mixers, network audio – have a fantastic reputation. But we’re still a family business.

Q: You’ve spent the best part of the past five years transitioning to your new role. What’s the growth been like in the EMEA region for Audio-Technica over that period?
RMM: It’s been incredible – 160 per cent growth over five years. In five years, we’ve gone from four offices to seven, following acquisitions in the Netherlands and Spain. Last year, we added a support office in Dubai. Staffing levels have doubled. Consumer audio, fuelled by turntables, has grown considerably. Our business has gone from 80:20 professional/consumer to 50:50.

Q: What’s your secret sauce?
RMM: We’ve always had the credible step-up product that enabled high-street retailers to talk to someone in confidence, when they were looking for something better; when they wanted to go further on their vinyl listening journey. The AT-LP60BT, the Bluetooth turntable, was an important product, as it appealed to the younger buyer that maybe didn’t have separates. With the LP60BT, they could add a pair of active speakers or pair it with Bluetooth headphones. And if the customer wants to get into hi-fi separates, maybe with the AT-LP3 and AT-LP5 turntables, they can explore and enjoy the experience of buying hi-fi separates. 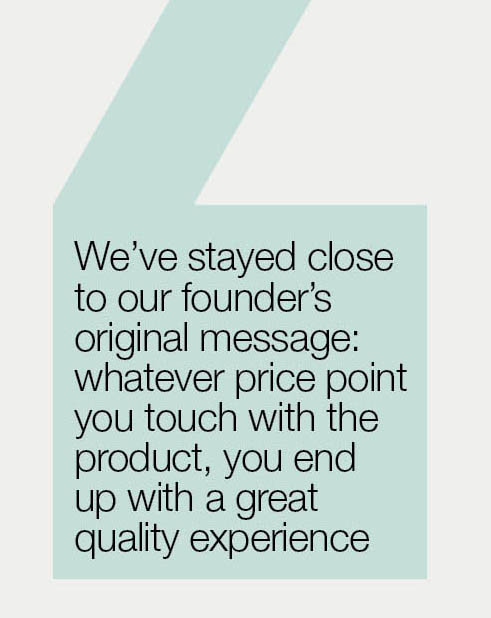 Q: What will visitors to IFA have seen on the Audio-Technica booth?
RMM: The focus for us at IFA 2018 was headphones, and we had some key launches. We launched the ATH-MSR7b and ATH-CKR7TW True Wireless headphones, waterproof ATH-SPORT7TW True Wireless, the ATH-SR50BT over-ear with touch controls and noise reduction, ATH-SR30BT on-ear wireless with a 70-hour battery life, ATH-SR50 and VM95 cartridge series. We also have an app that will allow users to change codecs, EQ and manage noise reduction. And if you lose one of your True Wireless ear buds, you can use the app to find it!

Q: Looking further down the road, what technologies do you see driving the business? Does artificial intelligence have a role?
RMM: I think it has to. Voice is a natural way to interact. It’s not a generational thing, either. We’re all talking to our devices. People will expect that functionality when they walk out of the house. It’s the job of manufacturers to make the experience seamless. The other key innovation is battery life, specifically reducing the weight of the battery.

Q: With AI and wireless, are we beginning to see the end of the traditional hi-fi headphone?
RMM: No, I don’t think so. People will always understand that there’s a difference between a wired and wireless listening experience, despite how good aptX wireless codecs get. There will always be purists who want to stay in the analogue domain.

Q: Hardware innovation is one thing, but retail support is another. What are you doing to help independent retailers?
RMM: The retail channel is incredibly important for us. Yes, we have a lot of support from national retailers, but we’re still true to our specialist hi-fi channel. We have a cartridge specialist travelling around the UK, and that’s important, because cartridges are another upgrade path. It even surprises us in the office, just how much more nuance you can get from a track.

About a year ago, we launched the AT-ART1000 (Audio-Technica Reference Transducer), a £4,800 cartridge. We only make 200 a year. The transient response offered by that cartridge is incredible. High-end hi-fi is alive and well.

Q: It seems that you’ve also stepped up the brand’s visibility. Not just at Spiritland, but at the Barbican where you have a listening station in the music store.
RMM: I was there only recently. The staff told me how wonderful it was that consumers could listen to vinyl on-site. We’re also prominent in Dixons Travel and we’re on the John Lewis Summer of Sound roof terrace, where the vinyl collection changes every month. It’s also an opportunity for us to convey heritage information. We like to do things that capture people’s imagination.

Q: It sounds like there’s a lot of confidence in the business, despite looming uncertainties…
RMM: Oh, we’re going to have a super portfolio of products in 2019. As for Brexit, it’s difficult to know what it means, but I can tell you that CES will see another range of new Audio-Technica product launches. I think 2019 will be a great year for retailers, whatever their size.