‘The mass market is coming’ for smart appliances The UK electrical retailing industry is in pole position in western Europe when it comes to selling connected major domestic appliances, accor­ding to data from researcher GfK. Speaking to ERT, Norbert Herzog, GfK’s strategic insights manager, says that the global smart appliance panel market, excluding North America, was worth €14 billion for the 12 months to the end of March 2018.

Looking at key buying trends, Mr Herzog says the most popular trends are multifunctionality and convenience. 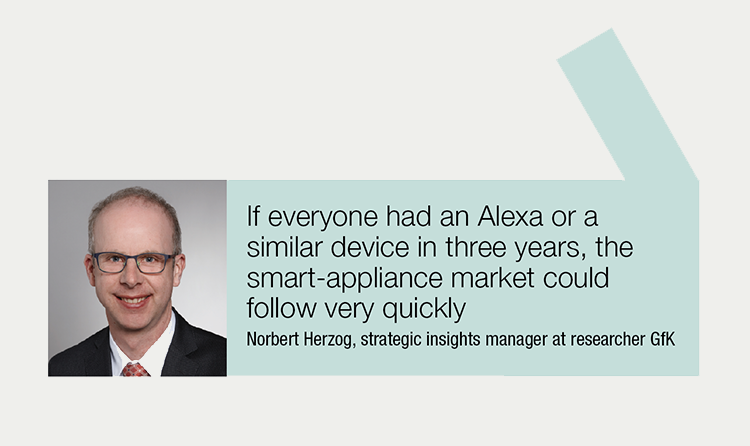 He adds: “Consumers have an expectation that things are connected – their smartphones are connected and they are used to using apps. When buying a washing machine, consumers expected an app that will help them control their appliances and help them on choosing the right programs.

“Convenience is a major trend in MDA, not only smart, but there are specific features that enable consumers to do more in the kitchen. Examples of this include an integrated steam function in ovens, which enables you to bake really tasty bread.

“Another example is intelligent sensors on a hob, with low, medium and high settings, that ensure that water doesn’t boil over, pancakes don’t burn and the hob tells you when it’s time to put your steak into the pan. These innovations are driving the market.”

The challenge with smart appliances, Mr Herzog concedes, is that consumers still need to load their washing machines and fridges and he adds that smart air conditioning makes more sense, when users can use an app to remotely manage their in-house climate before they arrive.

Manufacturer challenges
One of the things that will soon launch into the market are appliances that feature voice interaction, with smart voice assistants, such as Amazon Alexa or Google Home, which will enable users to control their appliance by speech.

Mr Herzog says: “The right trigger to buy is important – if everyone had an Alexa or a similar device in three years, the smart-appliance market could follow very quickly. Some manufacturers have added triggers, by adding additional services such as an auto inventory list that recognises your food in the fridge and can connect recipes to that.”

He adds: “The cost of a smart appliance is a big factor. We can clearly see from our data that adoption is highly dependent on cost. The cost of a built-in appliance, for example, is way beyond €1,000 and adoption is very low.

Mr Herzog is confident that smart home appliances will become mass market over time and reports that in some countries some categories have reached mass market status.

He says: “I think it’s hard to charge extra for smart today, however, a trigger of voice recognition will give a reason to pay more for an appliance. We believe that unit sales growth of smart appliances will continue at a similar pace as in 2017, where the market grew by around 90 per cent, in 2018.”

Manufacturers seem to be unan­i­­­­mous that the benefit of smart appliances to electrical retailers is that they cannot be effectively demonstrated on the internet, making for a great opportunity.

By taking ownership of connected technology, opening up the showroom to become an engaging experience centre, inviting customers to touch and feel the appliances, the entrepreneurial retailer can really take advantage of breaking into the new market.

Mr Herzog says that in terms of barriers to consumers purchasing smart appliances, data privacy is the number-one concern.

Mr Herzog says: “The conclusion that I take from our data is that there is not a strong consumer pull at this time – it’s more of a manufacturer push and this has a lot to do with the prices and offers that are quoted. The mass market is coming, it’s only a matter of time.”

Swan returns to the floorcare market with Eureka collaboration