‘We’ve had a rockin’ year with independents’

Beko is enjoying phenomenal success in the independent channel. Its Blomberg brand was Euronics Supplier of the Year in 2016 – and it has just launched its first SDA range. ‘I feel lucky to be part of it,’ managing director Teresa Arbuckle tells Sean Hannam

When ERT sits down to talk to Teresa Arbuckle at Beko UK’s headquarters in Watford, it’s almost exactly two years to the day when she took over the role of managing director of the home appliance company.

“I got the phone call two years ago from Ragip [Balcioglu, now the chief commercial officer of the Arçelik Group, which owns Beko]. I looked a lot younger then,” she says, laughing. “It’s been a real opportunity, but it’s had its challenges, particularly 2015, which was really tough. The price deflation in the market was really challenging and there were a lot of strong competitors.

“We’ve kept focusing on doing what we do best and trying to align all of our product innovation with how we talk to our customers.

“We still believe our retail customers are the most important people in the business. Equally, we’re talking to our consumers about what really matters to them.”

Prior to becoming MD, Ms Arbuckle was Beko’s marketing director. She joined in September 2011.

“Sometimes a company and an individual find each other – they were looking for someone who could help with their marketing and product innovation and new customer relationships, and I was looking for a company that wanted to do things slightly differently,” she says. “I feel really lucky to have been a part of it. I’ve been with the company for five years. When I first got here, there was a heavy emphasis on Beko as the key brand.

“Now I’m working for a multi-brand company, with Blomberg, Leisure, Grundig, Beko and Flavel, and we’re moving into SDAs. We’re a company that’s really on the move and hopefully will continue to be successful in the future. SDAs are our next big thing.”

Q: You said that the market was tough a few years ago. How has business been for Beko over the past 12 months?
Teresa Arbuckle: We had a fantastic year in 2016 – it was a record-breaking year in both volume and value. GfK – January to December 2016 – puts us at 16 per cent, which is the number-one position in volume, and we were number one in value for the first time ever, with a 12.3 per cent market share.

We were also number one in freestanding and built-in. And the Blomberg brand is now big enough to be calculated in GfK, a testament to what happens when a manufacturer and retailer work together to deliver success, like we have with Euronics.

Q: What do you put that success down to?
TA: We’ve had a really good focus on built-in and great customer relationships – particularly the independents. We had a rockin’ year! Blomberg was the Euronics Supplier of the Year, which was great. And in terms of built-in, which was our growth area last year, we had positive results for both Beko and Blomberg. We were 57 per cent up with Beko built-in for independents and 35 per cent up with Blomberg built-in. 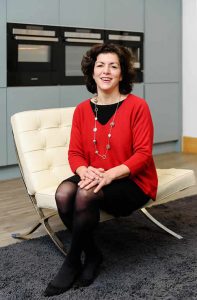 We serviced over 500 Euronics agents in the UK with Blomberg, Beko and Leisure, or a combination of all three. We have been focusing on CIH [Euronics] as our key customer. Over the years, we’ve spent a lot of time and energy on them. We had a makeover of our freestanding Blomberg range in 2015 and the built-in range in 2016. I think that really helped to create an atmosphere of success for independent retailers.

When you have a record-breaking year and you see the success that our team shares – I’m not doing it on my own; it’s about a hard-working group of individuals who kill themselves every day to make sure that our brands, and our company, are well represented – it’s ultimately incredibly rewarding.

Q: What’s your view of the independent retail sector? Is it healthy?
TA: The [GfK] statistics shown at the ERT Turning Point Summit [In 2010, there were 2,718 independents – there are now 2,123] were quite surprising and something to be very mindful about in terms of just how many people have decided to stay in the independent trade.

The numbers can look daunting, but I don’t think it’s all doom and gloom, with shops closing down because there isn’t room for an independent in the local market. A lot of it is personal choice.

The business model of the mom-and-pop shops that get handed down to the son or daughter isn’t necessarily what people are interested in anymore – things have moved on. Sons and daughters may sometimes think that glittery digital jobs in London are much more interesting than working with washing machines in their local town.

You see the strong independents surviving – there are some real success stories within the independent sector. That’s not only the big chains of independents, but also some of the small ones. They’ve invested in technology to make sure that their websites can compete and they’ve invested in their propositions. When a consumer goes into their store, they don’t leave without buying something – and they use brands that give them a sheltered position to make more money.

We partner with our retailers on digital marketing. With the independent sector, we try to do something that’s really simple to adopt and use and execute efficiently. It means that the independent trade can take advantage of the same sort of digital support that other retailers are getting.

Q: Can you update us on the trade activity for Blomberg – the brand that’s exclusive to Euronics agents?
TA: With Blomberg, we have an independent sales force of seven people, led by Steve Naylor [channel manager – independents]. We’re back up to full strength and right now we’re planning how we make sure that our independents know all about what’s going on at Blomberg, even though the Euronics Showcase isn’t happening this year. We’ve done training road shows in the past but, because it’s hard to get to all the independents, we haven’t covered every single plot of land that we need to.

We’re in the middle of figuring out how we get to all of those independents and how we tell them about Blomberg built-in and freestanding, as both ranges are still really new.

We haven’t finalised all the details yet for Blomberg activation this year. So watch this space.

Q: Has there been a strategy to change the brand perception of Beko and move it more into the mid-sector of the market?
TA: Beko is a mass brand – it serves a lot of different people. If you look at Tesco, it has Tesco Finest and Tesco Value – people don’t have a problem with that. That analogy holds true. If you do the marketing well, and you define the products well, you can serve consumers who are on a tight budget and are looking for a real value-for-money proposition and you can also serve customers who are looking for a great product that’s filled with fantastic features – things like American-style side-by-side fridges, beautiful multifunction ovens and great eco dishwashers. All of those serve a different target market, but ultimately make Beko a true mass brand, servicing lots of different consumer needs.

We really think SDA is the next step for the Beko brand. We have a 95 per cent recommendation rate among Beko users – 95 per cent of people who’ve bought a Beko product would recommend it to their friends or neighbours. With that kind of recommendation rate, and having products that people really do use every day – we’re the Official Partner of the Everyday – SDA really fits into that. 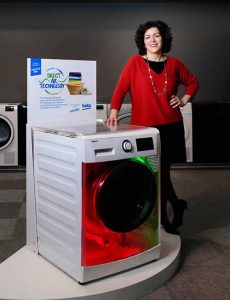 Q: With Brexit on the horizon, what’s your take on the year ahead?
TA: We don’t know how Brexit is going to impact – it’s difficult to face that uncertainty.

Just the sheer fact of the foreign exchange rate has meant a difficult situation for many manufacturers.

We’re looking at budgets that are different based on foreign currency. It means that 2017 will be a period of adjustment and I think we will hopefully see the value coming back into the market and people seeing the products at the value that they need to be. It may cause an erosion of consumer confidence, which is the biggest worry for any manufacturer or retailer. Nobody wants consumers to be worried about their next purchase.

I think what’s brilliant – and shows the resilience of the British public and the appliance industry – is that we’re making sure that we keep people knowing why they should keep buying appliances and not hold off redoing their kitchens.

There’s a healthy amount of consumer communication that keeps the market turning and continuing to deliver.

The appliance market has grown up and is more active than it was five years ago. It’s not a list of features that gets the consumer excited – it’s about what the appliance gives them and how it changes their life. A 9kg washing machine means nothing, but if it means you don’t have to do laundry on a Saturday morning and you can spend the whole day with your kids – that’s a big difference. We’re trying to recalibrate appliances so people can see them as the time-savers – and life-savers – that they are.

I think there’s still a lot of catching up to do – a lot of consumers are still stuck in the 1990s. It’s not their fault – they don’t buy appliances that often – but we need to continually try to educate them on how much more energy-efficient appliances are. We need to try to make sure people understand just how good appliances are today – forget connected, that will come along.

Q: So what’s your view on connected appliances? Does Beko have a strategy for the smart home?
TA: Our group has a vested interest in making sure that we’re at the forefront of connected technology. We’ve been doing research on it for over two years.

There’s still a lot of work to be done on what the proper USPs are for the consumer, who still has to use an appliance in order for it to work – they have to put some laundry in the washing machine and stick the chicken in the oven.

Most manufacturers are still trying to get a sense of what connected appliances are going to look like. It all boils down to, ‘is it worth doubling the price of a product in order for someone to see how many hours their washing machine was on and how much detergent it used compared with last year?’

It’s balancing the cost associated with putting in connected technology against the benefit to the consumer. This year, we’re going to be doing some connected appliance trials. We’ll have 10 Grundig products out in the field with an independent test house and with consumers. We’re going to learn a lot more about how best to introduce the right products to market with both Grundig and Beko and, ultimately, any of our brands.