‘I think the market is in a really great place…’

You should never underestimate the quiet ones. Miele has focused on partnerships, not flashy marketing, to steadily grow its business. Managing director Simon Grantham talks to Andrew Davies

As anyone familiar with Miele will know, the UK head office in Abingdon, Oxfordshire, includes the grandly-titled ‘Experience Centre’, a name that leads to, one imagines, the long-suffering receptionist having to smile professionally through waggish visitors striding in and saying they’ve come to pick up their experience.

The centre is actually a hugely impressive two-storey showroom with the kind of space for training and live cookery events that smaller competitors would drool over. As you would expect from one of the industry’s premium brands, there are no half measures.

And with another successful period of growth under his belt as he celebrates 10 years at the helm, managing director Simon Grantham looks relaxed as he poses for the ERT photographer, adopting the casual lean that all senior executives must learn in business school for when they’re getting their picture taken.

Not only has he steered the ship steadily fuss-free through a series of new product launches that have lead to both double-digit growth and new records for turnover, he has also just signed up to be the new chairman of appliance industry association Amdea.

“Globally, it’s the strongest year the company has had since 2005,” he explains. “There are lots of factors that have lead to that – improving economies around the world for instance – but the main reason is that we’ve launched an awful lot of new products in the past two years. In the UK, ever since we came out of recession and consumer confidence improved, we’re seen significant growth.”

This view is slightly at odds with Sean O’Driscoll. The Glen Dimplex group chief executive recently told ERT that the white-goods market was “very, very difficult” with “massive price deflation”. Is the polarisation between mid and premium markets really that pronounced? 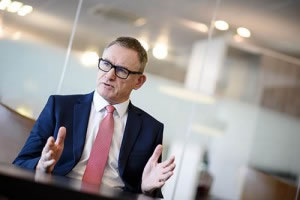 “Definitely,” Mr Grantham says. “You’ve got a lot of volume growth at lower price points, but fortunately that’s not where Miele operates. You’re seeing strong growth at the premium end of all the main categories, and that includes freestanding, too.

“If you take washing machines as an example, I recently saw one advertised for £149. Our best seller is £1,100. There is a customer at the top end of the market who wants the performance that goes with that. I think the market is in a really great place and I don’t think it’s poor at all.”

As well as product development, there has also been a significant investment in the brand’s marketing activities – Mr Grantham says the spend has doubled – including straight advertising, as well in-store displays for retail partners and, towards the end of March, a complete refit for the Miele Gallery showroom in central London.

While this marketing spend has undoubtedly increased, much of it has gone towards a clear strategy of developing face-to-face relationships with both retailers and, ultimately, consumers – particularly for the built-in cooking ranges. Miele’s approach is not to plaster the brand over as many things as possible, perhaps explaining why they often don’t appear to be as overtly flashy as some competitors.

For example, back in September it announced the launch of its ‘Taste For Design’ consultations, replacing and building on the successful ‘Let’s Do Lunch’ programme that had run for several years. It allows retailers to send clients to the Experience Centre or the Gallery for half-a-day and let them use the products and see them demonstrated by home economists. The company says nine out of 10 who attend end up upgrading their orders.

“Building relationships is definitely our strategy for our cooking business, where people are often in a three-month project deciding on their kitchen. Part of that process is learning about the appliances and that’s where you can give a personal, almost hand-holding, service.

“We’ve found that the best form of marketing we have is when our customers become advocates. When they refer us and talk happily about the quality – it’s very successful. We’re now going to take that a stage further with a new VIP programme for our top kitchen partners that we’re rolling out in the spring.”

One aspect of the ‘relationship’ approach to retailers – or ‘retail partners’ as Mr Grantham frequently refers to them – is the idea that by working more closely with fewer of them, the supplier can end up with more business. The continuation of that approach is inevitable, according to Mr Grantham.

Right now, there’s a huge number of consumers that want the personal service that only independent retailers can provide and we will do whatever we can to support them

“It’s interesting, because when we went into the recession quite a number of electrical retailers and kitchen specialists left the market. However, a lot of new kitchen studios in particular have come back in, and we’ve had a lot of new applications to open accounts in the past couple of years, which has been really positive.

“However, the number of retailers will become more concentrated when it comes to freestanding electricals, because it’s a very competitive business and is being driven a bit more online. But, having said that, what we’ve seen is that our top 100 customers have got stronger with us – and I’m sure other brands as well – only over the past two or three years.”

Does that mean he sees a positive future for the independent electrical retail market?

“It’s very complex, actually,” he says. “It depends a lot on location. If you’re in a market town and there aren’t electrical superstores – and we have very good customers who fit that profile – they present the product brilliantly.

“They may have a small shop, but usually an amazing reputation and that reputation has built up over generations. They take a personal interest in every customer that comes through the door – that’s their USP and I see a fantastic future for those retailers.

“On the other hand, a big independent superstore is competing with national chains and they have to be absolutely on top of their game in terms of in-store theatre, staff and support. I see a fantastic future for those retailers, too.”

An opinion often voiced by independent retailers is that they don’t get enough ‘support’ from the large brands. But is that an obligation that people in positions like Mr Grantham’s should feel? Especially if it’s regardless of the comparative level of business that retailer is doing?

“Ultimately,” he says, choosing his words carefully, “you want to follow the customer and try to predict where they are going. Right now, there’s a huge number of consumers that want the personal service that only independent retailers can provide and, where that exists, we’re in total agreement with them and will do whatever we can to support that retailer.

“At the end of the day, though, we are driven by commercial decisions. If the retailer and Miele can’t make money out of it, there’s no point doing it.”

The headlines have been full of the problems Whirlpool is having with the massive amount of remedial work it is having to do to put right a fault on its Hotpoint, Indesit and Creda tumble-dryers. 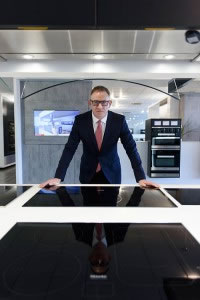 This coincides with Mr Grantham’s acceptance of the Amdea chairmanship and, for him, it underlines the importance of one of the organisation’s main initiatives. ‘Register My Appliance’ was set up to encourage consumers to register their ownership of any new product, so they can keep up to date with relevant safety information.

“Register My Appliance has, in my view, been the most powerful initiative that Amdea has done over the past three or four years and actually the success is there in the numbers,” he says. “There are 60 brands that have it on their website, encouraging consumers to do it, and there has been a huge take-up. It’s about getting the message out that there’s nothing but advantages in registering that new appliance. It’s a good example of an initiative that has united a quite diverse and very competitive industry.”

Mr Grantham recently celebrated 10 years with Miele and, after that amount of time, the characteristics of the boss tend to rub off on the company. In person, Mr Grantham comes across as calm, collected and unflappable and it’s fair to say that Miele UK has also adopted that persona in many ways.

That approach belies a strong commitment to implementing the rolling product development programme coming from Germany and finding new ways to invest in the brand and its relationship with retailers and consumers. It may not be flash, but it’s always the quiet ones you need to watch out for.