Before beards became fashionable facial attire for hipsters, they were quite often sported by middle-aged men who hung around dingy hi-fi shops and listened to Pink Floyd’s Dark Side of the Moon on vinyl – something else that’s now been adopted by the too-cool-for-school fraternity.

Founded in 1972 and with 24 stores in the UK, half of which are franchises, the business has moved on from the old style of traditional hi-fi retailing and benefited from both the rise of the hipster and the vinyl revival.

It’s clear that Sevenoaks is one of those specialist technology retailers that now’s a much more appealing place for both younger and female consumers to visit.

“Who taught us to do that? Apple,” says Mr Lawley. “They knew what their values were. We reacted very quickly. Six years ago, when I had a meeting with our franchisees, we looked at images of areas in John Lewis and Apple Stores. I also showed them some new car showrooms, like BMW or Mercedes dealerships – they don’t look like dodgy corner hi-fi shops. Our store in Sevenoaks was the blueprint for our new style of shop, which I will describe as ‘Apple-esque’ – they’re open, they’re bright, you can see in and you can touch and feel everything. It’s a good experience.” 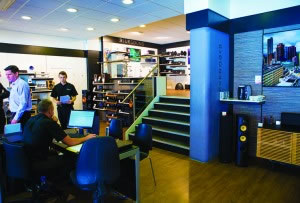 On the resurgence of vinyl, he says: “We’ve seen the born-again vinyl lover who’s upgrading and buying something better. For us, sales of mid-to-premium turntables are up – we’re 65 per cent up on turntables. We’re also seeing new people who are definitely hipsters and are buying the £150 to £200 Pro-Ject and VinylPlay type of products. A lot of them are buying online.”

He adds: “The readership of our [online] magazine Select is far more female and younger than we thought. We always think we understand our demographic, but sometimes you’re surprised. We had Bob Dylan on the front cover of our latest issue of Select – the times they are a-changin’ and that’s the message to our customers…”

Q: You launched your new smart home service and website (https://smarthome.sevenoakssoundandvision.co.uk) earlier this year. Can you tell us the thinking behind that?
Rob Lawley: It’s been a year in development – mainly because three years ago we moved away from our old website to our own SSAV.com e-commerce website. While that has been incredibly successful, it meant that we lost the service side of things.

For new customers going to the [SSAV.com] website, they can see the products, but they may not be aware of the services. The custom install side of our business is very important – we’ve always been doing it and we’ve been very good at it – but it’s not quite joined-up. After a year’s worth of diligence in terms of trying to understand what people were searching for online, the idea was to have a dedicated site. 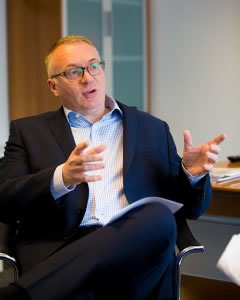 You’d be amazed what people don’t search for – on Google, fewer than eight people a month in the UK search for the term phrase ‘custom install’. We needed to optimise our website for what people are searching for – wireless speakers, how to install a TV…”

The website is written in the same style as our magazine. It’s chatty and friendly – a jargon-buster – and is aimed at taking the customer on a short journey to get to our guys who are in-store. It’s about getting an enquiry – we’re offering our stores a lead. There’s definitely an appetite in the market for straight-talking solutions and I’m not sure anyone else is doing it quite like we are.

Q: Is the smart home a confusing area for the consumer?
RL: Absolutely – I think people like the idea of a smart home – we all do – but the truth is, people just want the things they’ve already got and they want their music and their movies to work simpler.

There’s a very blurred line between whether the customer wants a home cinema, a smart home or smart speakers – they don’t always understand it.

Q: Are all your franchisees offering the smart home service
RL: They all had a choice to opt in or out and all of them opted in – they’re all offering the service. We’ve also recruited a new smart home designer who is based in our store in Sevenoaks. He’s an experienced guy.

Q: Are you looking for any more franchisees?
RL: This might sound contentious, but we’re not seeking new franchisees. They often knock on our door and we say no – we like the franchisees we’ve got. Last year, three finished their terms and they signed up again for another 10 years. This year, we’ve got five who are happily reaching 10 or 20 years and are signing up again. Other than one store, I’m not aware of a franchisee that has moved away and survived by being an independent – it’s a tough market.

Fairly recently, we were approached by some indies who were strong in the past and asked if we’d like to buy them or could we look at franchising. That’s the only franchise we’d consider – if there’s an area that we’re not covering and those guys are, potentially, in the right position for it. We would look at working with other indies if they wanted a franchise.

I feel sorry for indies, but it’s all about adapting and being relevant in the market. Some of those guys don’t have the means, or the mind, to do it – they don’t want to change, which is a shame. We’ve really genuinely adapted.

Our retail operations manager came from the fashion industry and understands how professional retailing works, rather than just experienced enthusiasts – that’s the difference in what we do.

Q: Several of the more mainstream independents are going down the shop-in-shop route, with branded manufacturer areas. What are your thoughts on that?
RL: That’s interesting. Personally, I understand it, but in our stores we try to steer away from that, as we’ve always felt that Sevenoaks is the brand and we genuinely believe that we’re independent in what we offer the customer. We curate the profile of the products we’ve got – it’s always been part of what we do. Everything we sell is good – one brand doesn’t need to be highlighted more or less than another.

Q: How’s business in general?
RL: Our [financial] year runs from July to June. The first half was the best in four years and the previous year wasn’t that wasn’t bad, either. We’ve definitely seen an improvement in customer confidence and conversion. January and February were slow, but we’re now up for the year. We don’t include our franchisees in our overall numbers – we don’t divulge their business. With ours – which is online and our 12 own stores – we’re eight per cent up.

Q: What’s driven that growth?
RL: People’s buying patterns. There are two types of customer – the guy who does all his research and then walks in and buys quickly, and the customer who spends all his time in the shops and then buys online. We felt we had to be a true multichannel platform and react to that. Click and collect has played a huge part – one of the big shifts on our website has been offering a live inventory, so a customer can pretty much choose their local store, reserve a product and pick it up. One of our busiest times of the week is Sunday evening – when we’re shut. We see a massive spike in orders – people are at home listening to music and enjoying it and they decide they want to invest in something better. We also see a spike during commuting hours– six to eight o’clock in the morning. People are placing orders on their devices.

Equally, our stores are also up – part of that could be click and collect, because the transactions are carried out in-store, but also it’s because people are coming in for the experience. Our business is up across the platforms – we’re pleased, but we’re not resting on our laurels. We feel that we’ve got to continue to work hard. The rest of this financial year will be a fight for market share.

The market’s shrinking. A friend of mine said that the industry’s like a sunset. It’s nice, beautiful, long and drawn out. We want to be part of that, but we’ve got to look for a sunrise opportunity and see where consumers are going.

We’ve noticed that consumer decision-making is much more to do with design, but performance is always important, otherwise people wouldn’t be in our stores – they’d go to one of the sheds or buy online.

We have competitors with the commodity products – Currys, John Lewis, Richer Sounds and the indies – but we don’t have a direct competitor. We’re unique – I really feel that. Our shops are well placed in good locations.

I believe we are the only retailer in the UK to have all the high-res audio brands that we do – we have a nice market.

Our customers are premium. We had a customer in our Sevenoaks store recently who was deciding whether to buy a pair of £12,000 speakers, or hang off for a bit, because he was buying an Aston Martin. He bought both – and spent another £10,000 on Naim audio products, because he was so impressed.

Q: How do you see the future for Sevenoaks Sound & Vision?
RL: I’d like to be able to open two new stores of our own a year, providing they’re in the right location and with the right lease. If we can’t secure those two things, it’s not worth doing.