Richard Lindsay-Davies, chief executive of the DTG, has spent more than 20 years working in the television industry. In an exclusive interview, he shares his views on how retailers should sell 4K/UHD and gives us the bigger picture on the TV tech of tomorrow

Richard Lindsay-Davies and his team at the DTG watch a lot of television.

“We’ve been specifying what goes into every TV sold in the UK market from a broadcast perspective for over 20 years and we still do that today – making those basic things work well is still as important as ever,” he tells ERT, sat in a meeting room overlooking the Thames at the organisation’s headquarters in Vauxhall, south London.

Mr Lindsay-Davies, the chief executive of the Digital Television Group, has more than two decades of experience in the TV industry.

In 2005, while he was director of public affairs at the DTG, he founded Digital UK – the UK digital switchover body – and he played a huge role in the launch of the Freesat platform. In 2012, he was named as one of the most influential leaders in digital media by Digital TV Europe.

So is the current UK TV market – with its proliferation of services and technology – much harder to deal with than that of 20 years ago?

“The UK probably has one of the best and well-organised TV markets in the world, because the industry still comes together and deals with it,” he says.

“It’s been a real rollercoaster. When we started out on the journey [to digital TV] in the mid-to late Nineties, I don’t think we realised how much it would continue to evolve and how much the globalisation and the quality would improve over the years.

“What has changed is the complexity of the market. The number of services is vast and so is the globalisation of those services – but the basics, like a great experience and customer service, are still fundamental.

“We have to carry on looking after television as it evolves in its normal state. It’s important for spectrum changes – with digital switchover we cleared 800MHz and now we’re clearing 700MHz for more 4G and 5G services. The demand for TV performance and the improvements in it need to be integrated into the specifications.

“D-Book 10 – our specifications for broadcast TV in the UK – will come out in October/November. This will include some enhancements to improve coexistence with mobile services and it will also begin to pave the way for more advanced services, such as 4K.”

He adds: “Last year [in D-Book 9], we included PQ-10, Hybrid Log Gamma (HLG) and High Dynamic Range (HDR). This year, we’re looking at what else we can do with High Efficiency Video Coding (HEVC).

“All of that is our bread and butter and it ensures that television carries on working. Once those products and services have been launched, they’ve got to be supported in the market. Much of our work is on developing tests and then testing and supporting a collection of well over 400 TVs and set-top boxes. Any changes on the broadcast network – any introduction of new services and new technologies – are thoroughly tested across those products.

“It’s really important that we support products in the market and make sure that services continue to work for the length of the warranty of the product. In a more complex world, that’s a real challenge.”

The DTG has set up a website – uhdready.co.uk – which lets users check which TVs are compatible with which 4K and UHD services.
Has it been successful? 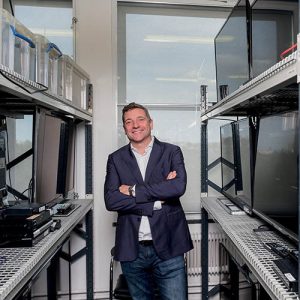 “It’s had mixed support from the manufacturers – some of them wanted to support customers directly,” says Mr Lindsay-Davies.

“The problem is bigger than ever. If you’ve got the wrong UHD TV, you might find that it won’t work with the new colour system and you might get a poor experience of HDR. It’s certainly an opportunity for retailers to make sure that they are able to give good advice when a customer comes in. If I was on the shopfloor, the first question I’d ask someone who’s buying a new TV is, ‘what services would you like to watch?’

“If you want to watch Sky Q in UHD, or BT, Netflix or Amazon, that’s a different buying decision than if you just want to put a TV in front of your grandmother so she can watch broadcast television.

“There’s a real opportunity for [bricks-and-mortar] retailers to forge a long-term relationship with their customers, which online retailers aren’t able to do. I also think there’s an opportunity for retailers to hold a customer’s hand – make sure that they plug their Amazon Fire TV Stick into the right port. Not all ports are equal on all TVs – people forget that.

“It’s about giving good advice to the customer, so they get the TV home, they set it up right, they get a great experience and they come back when something else develops. If there was a single bit of advice I’d give to a retailer, it’s to make sure that they have an ongoing connection with their customer.”

So, if TV is about “a great experience”, what is currently exciting Mr Lindsay-Davies in TV content and tech?

“It polarises into two experiences – the first is when you get stuff like Planet Earth II, which is amazing in both depth of video and sound. It gives you a proper emotional experience. The other thing that’s really exciting is using tech to make my life easier. I’ve recently gone from sitting on my sofa with six remote controls and trying to remember which one did what, to having a TV with all the apps built-in. I have one remote and I can get to all of my services. I also think voice recognition and search is very important.

“Tech supercharging my experience is amazing and, equally, so is tech making my life really easy. A mixture of the two is the alchemy that I want from television.” 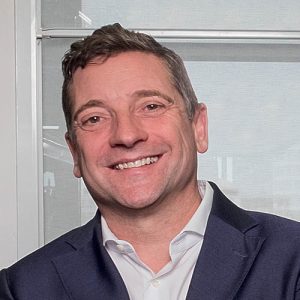 Selling 4K TV
How do we make sure that viewers are buying the right product and they know what they’re going to get? Far too many customers are taking a 4K or UHD TV home and watching BBC One in standard definition.
You have to tell them to type in 101 [on their remote control] to get BBC One in HD – it’s a very simple message. There’s an opportunity to educate viewers.
If a retailer’s getting X per cent of returns because people are getting a 4K panel home and looking at it in SD, they have to make sure people are typing 101 in and watching it in HD. If that reduces your returns by two or three per cent, that’s a big saving.
The broadcasters are looking at ways to improve the prominence of HD services.
Over a quarter of the UK subscribes to services such as Netflix or Amazon Prime or Now TV – that’s on top of the heavy subscription base already secured from pay-TV. How can retailers help those customers and viewers to get the right experience? I think there’s a real opportunity to help them through that.
It’s no accident that some of the traditional pay-TV companies are beginning to bring their installation teams back in-house – they realise that going forward it’s a much more complex area. Aerial installers looking at how they sort out people’s IP connections to a TV is very important.
It’s about ensuring that, as new products and services come to market, they can be retrofitted to today’s TVs and displays.
One of the most important things for retailers is to have an ongoing relationship with their customers – to make sure there’s a long-term support and engagement package in place. It’s critical. It’s no longer a ‘buy and forget’ for retailers or for broadcasters and service providers, who will be adding – and taking away – services.

The future of TV
The DTG is looking at what might happen tomorrow. Even though we only spend 15 per cent of our time doing that, it’s probably the most important bit and the most exciting.
There are lots of people in the TV industry that see a slow trajectory to more IP services. If we’re going to look towards the future, where the world is predominantly IP – fixed broadband or mobile – then we have to look at how we transition the things in TV that are very important to us today into a new world that could even be an IP-only one.
We’re looking at some core user groups and we can broadly segment them into three types:
Video-on-demand (VOD) users, which could include a three-year old with an iPhone or an iPad, or a teenager, or someone much older;
Mass-market/live ‘super-users’; who are fans of live sport and on-demand programmes like Game of Thrones – they have aspirations for higher-quality video, they need reliability and they have deeper pockets;
The ageing population – they’re probably quite happy watching traditional standard definition TV and they might never change channels.
Imagine a matrix of those three user groups – VOD, live/ super-users and those who want basic TV – and when you overlay safety, privacy, security, quality of experience, choice and cost, you end up with something that’s very interesting, but very difficult to recreate in an internet-only world.
It’s not an option to do nothing. As an industry, we will be forced to step up and address the challenges that are ahead of us. It’s the responsibility of us all – from policy-makers in government to the civil service of TV, like the BBC and others, right the way through to the consumer electronics industry and retailers, to make sure we look after all the customers and viewers.

The role of TV in the smart home
TV is a wonderful user interface – it will have a massive role where video is involved.
What’s key is transferring the great things about TV – the safety and the comfort blanket of TV – into the new world of the smart home. As much as all these technologies are exciting, we all know that they come with a pile of risks. I don’t want to have a wonderful smart TV experience if, in the meantime, someone is emptying my bank account.