‘Voice will change everything’

Pete Downton, deputy chief executive of music and radio services platform 7digital, has spent over 20 years working in music and technology. He tells Sean Hannam why voice control and AI have revolutionised listening and what role they will play in the audio industry now and in the future

Q: Tell us about 7digital…
Pete Downton: The new 7digital is the combination of two businesses – 7digital, the download and digital music service provider, which started in 2003, and UBC Media – a radio [broadcasting] business. The two companies merged in June 2014. We could see what was happening in the industry – the worlds of music and radio programming were starting to combine, as the internet became the principal platform for delivery. All the reasons why those two industries had been historically separate started to fade away and make little sense.

Radio was going to have to move on to the internet to compete and deliver interactive experiences and the kind of metrics that advertisers needed.

Once you have 60 million songs on a service and the ability to search the catalogue and find a piece of music quickly, if you know what you’re looking for, that’s an amazing step forward for the industry and for music fans. But there’s very little depth around that experience – it misses the context that comes with the storytelling around music, like the artwork when you buy a gatefold record. We felt that by bringing those two skill sets together we could provide full services for delivering experiences in music to those companies who don’t have those skills in-house.

7digital started as a business that was providing technology platforms to artists and record labels – it was essentially allowing artists to sell music directly to fans. As it developed, it had two sides – the 7digital download store, which retails music and was one of the first to support high resolution, and then it started building services for companies like Samsung and Blackberry.

Q: You’ve been working in music and technology for 21 years. What are some of the biggest changes you’ve seen?
PD: I’ve seen some of the big steps, like the launch of iTunes in the early 2000s and the launch of YouTube. When I was at Warner Music Group, I saw things from a record company perspective. What’s been astonishing to me is, if you look at the capability of technology and the experiences that are actually being delivered in music, there seems to be a disconnect.

We [the music industry] now have the technology to deliver audio in better quality than we’ve ever done historically and we have access to all the stories and all the expertise around music, but what we’re delivering to music enthusiasts is lower quality, no lyrics and no stories. It’s counter-intuitive.

Part of that is to do with the way in which the recorded music industry is structured. The major record labels’ real business for two or three decades was selling CDs. When the internet started to undermine that business, the obsession and focus was on how to find a way of delivering music digitally that replaced the revenue that had been lost from the decline of CD. The first area that was focused on was how do you super-serve music enthusiasts? 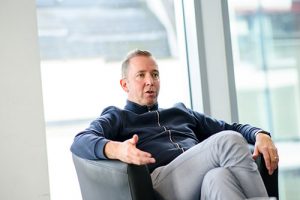 We’ve seen Spotify, Apple Music and services like Tidal and, internationally, some of the services we [7digital] power – TDC in Denmark and Juke in Germany – serving that market relatively well.

The music subscription model that’s emerged over the past five or six years is the culmination of that. It allows people who were music collectors back in the physical world to get access to the world’s music as they want it and when they want it, but it’s still pretty one-dimensional in terms of the experience. It’s relatively low-quality and there’s not much alongside the music. They’re still first-generation products – they’re delivering music and convenience, but they’re not even delivering the audio quality we had with CD.

YouTube has suddenly become a phenomenon – it and radio represent about 60 per cent of music consumption. Our aim is to deliver a music experience that serves music enthusiasts well and also gives the best audio quality possible and convenience – the ability to switch on and have something programmed for you. We have a heritage in radio and music programming and access to the world’s music on a platform – we have the skills necessary to do that. You have to walk and chew gum.

Q: What’s your take on voice control tech like Amazon’s Alexa? What role does it have to play in the music world?
PD: If you’re a passive music consumer, the most difficult thing is what do you play first? How do you start? What we’ve seen from a technology perspective in the past two or three years, with launches like the Amazon Echo, is that it’s shown that you can deliver a product that speaks to more than just music enthusiasts. Technology is making it much easier to discover new music. The voice interface is the first time that traditional radio has had serious competition.

There are some challenges for the radio industry, but the inherent value of radio is that it’s a personal medium and I think that will be enhanced over time with interactivity. At the moment, the radio industry is struggling to find a path and to take the best of what it already has and to move it to internet platforms. Things like the Amazon Echo and what’s happening around voice will make that happen more quickly – necessity drives most innovation.

Voice technology enables a paradigm shift – I’ve now got a product in my home that my six-year-old daughter can use to decide which music gets played in the living room. My wife, who loves music, but always struggles to work out what to play next, has got a platform to do that in a second or two.

Voice provides the ‘lean back, listen and enjoy content’ experience, but at a moment’s notice you can lean forward, step in, start asking the device questions and get more information. It’s the first time that convenience has been delivered alongside the potential of technology and it’s super-exciting for a music industry that has never really been able to bring together that demand that comes from radio with the consumption that came with CD and then music subscription. It’s the first time those two worlds have converged.

When Amazon first shipped the Echo, it was seen as a strange new product and no one knew what it was going to do. Over the past six to 12 months, you’re starting to see ecosystems built around the Alexa platform, as well as Google and Microsoft and independent platforms. It’s a whole different way of accessing content.

For me, voice will change everything – the interface makes a tremendous difference to multi-room. If you want to make use of technology in your normal daily life, it’s got to be incredibly easy. At the end of the day, technology is just an enabler – people adopt experiences that make their lives better. Most people have busy lives and when it comes to audio and radio, they consume it in a way that fits in with the reality of their daily lives. You’ve got to make it easy for people to use.

Q: Will voice be the gateway for the smart home?
PD: We always tend to overestimate the impact of technology in the short-term and underestimate it in the long-term. There’s a perfect storm around connected devices – voice was the missing piece. The Amazon Echo is getting better and better as time goes by, but you’ve still got to know what you want it to do in order to control it. As you look at new developments and compare the Google voice platform with Amazon’s Alexa, it [Google] has far more depth to the experience and it begins to understand you and the context in which you’re asking it questions.

A few years ago, when 7digital was looking at how technology was going to impact music, we focused on high-resolution and we’re starting to see that demonstrated with the way the music industry is moving. Voice and AI give you the ability to very quickly find a single song out of 60 million songs on a platform while you’re doing other things.

We’re working with Houndify – one of the leading independent platforms around voice. Two or three years ago, we started looking at how voice would transform the listening experience. We’re working with a number of clients who see Amazon’s Alexa as a threat to their business.

One of our clients is Media Markt Saturn – one of the world’s leading consumer electronics retailers. They are selling products that contain the Alexa platform and enable people to order products from Amazon. That doesn’t necessarily make them feel comfortable, but they see that those products provide real value to people’s lives.

If we move into a world where voice is driving so much more of the media that we’re looking for, it will be difficult to predict where that music will be coming from in three years’ time.

Q: Does that make it hard for device manufacturers to decide which horse to back?
PD: If you look at what Google, Amazon, Microsoft and others are doing, they’ve learnt from what’s come before in terms of operating systems and the idea that you can control an ecosystem.

Those companies recognise that they’ve got to find a way to provide platforms for others to innovate on – that wasn’t the case 10 years ago. There’s been a shift from ego systems to ecosystems.

What’s going to determine what’s successful over the next five to 10 years is ‘is it making people’s lives better’? ‘Can it allow you to do things more efficiently’? ‘Is it enabling you to have a better quality of life’?

From a CE business perspective, it’s great to see companies like Onkyo and Pioneer, who we work with, working with Amazon, Google and Houndify on devices that can use the best of what each of those platforms can offer. They’re focusing on products that can deliver amazing audio experiences. As systems become increasingly open, we’re going to see a lot more of that.

Q: Where do you see voice control and its role in the connected audio market heading next?
PD: What we’re seeing are the early signs of how people’s homes will be transformed – music and radio are at the forefront of that.

I think that will follow into cars – suddenly the content experience will become very personal. You’ll have the ability to take that with you – from a seamless listening experience in the home to your car.