‘The UK tech industry is in a healthy state’

What will Brexit mean for the UK technology industry and how will electrical retailing have to adapt in the age of the smart home? Paul Hide, techUK’s director of operations, gives Sean Hannam his view of what lies ahead in this brave new world

Standing on Blackfriars Bridge, looking at the view across the Thames, Paul Hide is reminiscing about his early days working in the technology industry in London.

“At that time, it would take me three or four days to visit all of my customers and stores on Tottenham Court Road – half of the street was 100 per cent electrical stores. This was pre-internet – I got my first mobile phone in my second year at Sony. Initially, I had a car phone. The early ’90s was when we were on the cusp of the consumer electronics explosion – portable music and VCRs were accelerating and the first camcorders had been launched. I came in at a great time – I’d always been interested in music and hi-fi. Tottenham Court Road doesn’t exist anymore. I think there’s one electrical retailer there – ASK.”

Now, more than 25 years later, Mr Hide is still working in central London for the UK technology sector – albeit at a much more senior level. 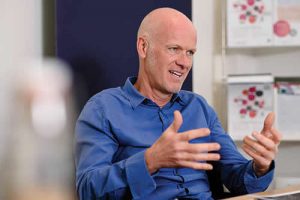 Based a few hundred yards from where we’re stood, he’s director of operations for techUK – the trade association for the UK technology industry.

With more than 900 companies as members, its vision is for the UK to be a leader in the development and use of digital technology for the benefit of the UK economy and its people.

Says Mr Hide: “We’re the only broad technology trade association in the UK – our members are across ‘chips to clicks’. We represent all sectors of technology and we work in both the public and the commercial sector.”

So how does he see the current consumer electronics retail market?

“The technology product sector is one of constant change and development – innovation fuels a desire and a reason to purchase and it maintains a value cycle. However, it’s interesting that some parts of the [retail] market are resistant to change in the way they sell.

“What we’ve seen over the past 10 years is that selling devices on their own is increasingly difficult because it’s a commoditised sector. Services, software and content offerings around the products are what drive value. The challenge for retailers is how they stretch their business model to focus more on services and applications.

“If you look at the 300 new members who’ve joined techUK in the past two years, they are nearly all software and services-based businesses. We run 22 different programmes in the technology sector, including consumer electronics, the Internet of Things and the smart home, but some of the fastest-growing are financial services – as people develop technology in the payment sector – and health and medical technologies for consumer and B2B.” 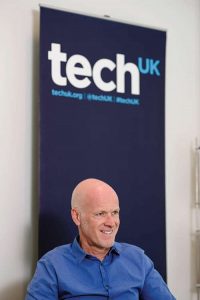 So is the UK tech industry in a healthy state and what effect will Brexit have on it?

“Overall the UK tech industry is in a healthy situation,” says Mr Hide.

“The UK has had a free lunch within the EU. We’ve been in an economic union but we’ve also had the added benefits of our native language being the international business language, of being midway between the US and Europe and having flexible business and labour regulations. Our environment has encouraged many [businesses] that want to have a European headquarters within the EU to be here. We no longer have that default advantage. We’ve got to give additional benefits and motivation to businesses to continue to invest in the UK.

“The UK doesn’t have a world-leading infrastructure – we are investing, but we need to invest more. We do have a healthy tech sector across the UK – not just in London – and a strong financial sector, which does help open up opportunities to raise capital and gain investment. However, we’ve got to ensure there’s a reason to invest in the UK. We have a solid platform and we have a market sector that’s open to innovation and change. TechUK has to be relevant, influential and credible.”

One of the most important things is that we [the UK] are open for business as usual – we have to retain consumer confidence and spending.

We know that all the currencies with which electrical goods are traded have significantly declined, so there’s a question mark over whether suppliers can absorb a double-digital devaluation. That’s going to be hard.

With margins under pressure, prices of imported goods rising and an uncertainty in consumer confidence as we go into peak, will manufacturers who are bringing in products be more cautious? Will we have low stocks of certain key lines?

From the surveys we’ve done, we know that 75 per cent of our members favoured remaining in the EU. However, it’s now about making the best of the position we’re in and looking at the challenges ahead. We’ve just completed a confidence survey of our members and, unsurprisingly, levels have dipped post-Brexit. That comes from uncertainty, which is understandable, as exit and post-exit plans are not yet developed.

The Government says ‘Brexit means Brexit’. We don’t know what that means, but there will be a significant change. We see it as an opportunity. There’s a new governmental team, if not a new Government, and techUK already has access to a lot of those new ministers. By the Government making a quick change in the Prime Minister and ministers, it has, in the short term, opened up an opportunity for a trade association like techUK, which is well-respected in Government and has a strong representation across industry, to talk to them.

The real proof will be what comes out of that. It has allowed us to get some of our key messages across that we believe will be required to ensure that leaving the EU becomes a positive, rather than a negative. 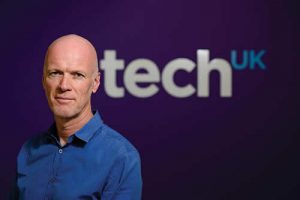 The rise of Chinese CE brands

China is in a position where it’s got fantastic engineering, R&D and very advanced manufacturing. The image of China being all about very labour-intensive and low-cost manufacturing is just not true. It has some of the most advanced manufacturing capability in the world and, increasingly, is starting to focus on brand development. It’s not established yet, but it’s getting there with brands like Huawei.

The Chinese aren’t the only ones – look at India, there are a lot of strong players in IT support and services. China and the Indian subcontinent are areas where we could see brands emerging that in Europe consumers are not so aware of. They could have a rich heritage in technology development and they could invest and have access to skills and resources.

We now seem to be getting close to common standards for HDR, which provides a much bigger quantum leap in the viewing experience.

However, when we look at UHD, we have to learn some lessons from HD. Even though pretty much every home has an HD-enabled TV as their main screen, the actual viewing levels of HD are still lower than they should be. We have the content and the devices and it’s being delivered, however, we have not really got many consumers making HD their natural first choice. Some of that is because regionalised programming is still only in SD.

I think virtual reality will be a lot bigger than most people think. If you look at what people are interested in, and what they’re spending money on, it’s immersive experiences. That’s not necessarily VR-based immersion, but big concerts and gigs, bigger TVs with higher-quality content delivery that’s more immersive – and surround sound to go with the picture. I think it could really grip people’s imagination – they will invest in the hardware and the content for certain events and it can create additional value in the market. 3D for me always had a gimmicky angle.

We’re seeing a shift in behaviour with millennials. Everyone over the age of 30 still uses devices in the same way – they want linear content and a big TV and they want to buy and own devices. The millennial generation is using technology in a very different way – it’s small screen and on-demand content and it’s far more socially connected. It’s creating a different opportunity and those people aren’t necessarily worried about owning stuff – whether it’s a property or a car or a TV. This could lead to different models of selling or providing products. I think rentals could be a growing opportunity, particularly with millennials, but there’s a massive resistance to it in the retail space – particularly independents – to look at rentals. People should open their eyes to the finance plan model in electricals.

Consumers have heard the terminology, but they don’t understand what the smart home means. Going to an online store won’t help them understand what it’s about – face-to-face interaction is where that market will develop.

It’s not just about products that connect – what’s missing is the platform of services. That’s where the prize is. You can buy products that plug into a network, but what’s that central control network that creates value for a user and can link the control of devices and the environment in the home – monitoring energy, security and health?

This is the opportunity for independent retailers