‘The Sony brand is back’

After a few tough years, when it took its eye off the ball, Sony, which celebrates its 70th birthday this month, is back in the game and gearing up for a summer of sport, as UK and Ireland country head John Anderson tells Sean Hannam

“There’s always new technology that provides an opportunity, but if you’re slow to adopt it and get behind it, then your competitors will take your share from you. Everyone’s hungry and if you’re not hungry, well that’s a problem,” says Sony UK and Ireland country head John Anderson, sat in the boardroom at the company’s HQ in Weybridge, Surrey.

What’s clear is that after a few tough years, when Sony was slow to adopt the latest technology and had its market share taken away by its competitors, the Japanese brand now has a renewed appetite and is back where it belongs, in the premium consumer electronics space.

It also has plenty to shout about, from innovative 4K HDR TV technology to High Power Audio all-in-one ‘boom box’ hi-fi systems with flashing LED lights and serious pumping sound that are aimed at the youth market. The brand is making a big noise in-store once more – literally and figuratively speaking.

“If you look at the amount of ranging we have in key multiples and independents, we’re much more visible as a brand – particularly in TV, which is where we dropped back a number of years ago,” says Mr Anderson. 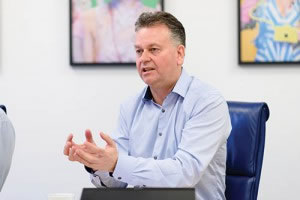 “Our growth in market share, for me, is a sign that the brand is back and it’s visible again. I also think further developments in 4K and leading technology, like our X1 chip, have rekindled Sony’s identity for picture quality.

“Years and years ago, brands specialised in different things around TV. Our Korean competitors brought in nice slim TVs and had a big emphasis on smart. Sony’s heritage was always around best picture quality and that remains our priority. When you talk to independent dealers, we have a very strong reputation for picture quality – that’s our identity.”

He adds: “If you look at the watchwords, design and reliability underpins all of Sony’s products, but what sets them apart is picture quality – on TV – and, in audio, we continue to push quality with Hi-Res. In digital imaging, we have a massive increase in the number of products we’ve been developing in the interchangeable lens area. In the markets we’re competing in, we have a technological edge.”

Q: When we last spoke to you, in early 2015, you said that Sony wasn’t finding the UK consumer electronics market challenging. How are you finding it now, over 12 months later?
John Anderson: I think that for the independent trade, TV is their bread and butter. The overall [TV] market was slightly down. Our financial year ended in March. The [TV] market was around seven million units – by our estimation, it was 7.3 million units in the previous year, with the benefit of the World Cup. Having said that, the value – as opposed to the quantity of the market – was quite well maintained. The area of 55in screen sizes and above did much better than we thought. The TV market continues to be very strong and it’s been helped by the introduction of better picture quality technologies. In terms of the other areas that independent dealers are interested in, you have home theatre, which is still a pretty stable market – we’re seeing good growth in premium soundbars.

In all our categories, we’ve grown our share by more than we planned to – it’s been a very good year for us.

Sony’s share price has gone up, with its improvements corporately and in its market share, which has been very much reflected in the performance of Sony Europe and, within that, Sony UK. 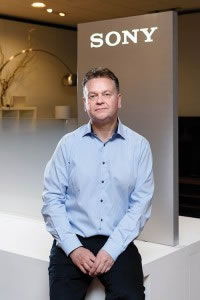 Q: Looking at the next few months, will the summer of sport be important for driving TV sales?
JA: Definitely. I think there are two strong factors that can drive sales from May through to the summer.

Economically, with all the talk around Brexit, things aren’t great for the UK, unfortunately. However, despite all the trade headwinds around exchange rates and whether we stay in or leave the European Commission, in our industry we can see that sales in TV are very buoyant and I think they will continue to strengthen because of the summer of sport and the Euros.

When we track back every two years and look at market data, we always see higher sales in those years where we have big sporting events. It doesn’t just happen on its own – retailers have to merchandise their shops and create interest and promotions around it. People are in the mood to buy something and the good thing for us is that this year there are three teams from the UK – minus Scotland – which are represented. After England beat Germany the other week, people think we’re even going to win it! It’s a delusion, but, anyway, I think there’s a lot of optimism.

There’s also the technology aspect – there are more 4K TVs coming out and you have HDR [High Dynamic Range], which is the big watchword. It’s a regeneration of 4K and very visible in terms of the benefits you can show in-store – the wider colour palette and the brightness when you put HDR against non-HDR content. It’s something that retailers can sell, but it needs expertise – the customer isn’t going to pay more unless it can be explained to them. I think the combination of the summer of sport and new technologies such as HDR is a massive opportunity. Our 4K HDR logo is very distinctive and the retailers we’ve shown it to love it. It’s great and we will have it everywhere.

Q: Let’s move away from TV and talk about audio products. Sony was quite late to enter the multi-room market. Is it a challenge to try and take away some of the market share from some of the more established players in that sector?
JA: If you look at multi-room, I’d say two things. First of all, it’s a market in which Sonos has done a great job. I think it would be true to say that for entrants coming into it – not just us – it’s challenging to actually develop that side of the business. However, having said that, Sony’s view is that multi-room capability, through Google Cast and the SongPal application, is a feature that’s been added to many of our products, from wireless speakers through to soundbars. For me, that market is moving away from being a dedicated category in its own right to a feature that’s being put on to many audio products. If you look at the number of products we sell with multi-room capability, we’re very happy – we’re increasing our share in wireless speakers and premium soundbars and that ecosystem will develop. 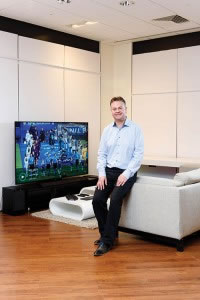 Q: At CES this year, Sony announced its PS-HX500 turntable, which, with its ability to rip records into high-resolution audio digital files, puts a new spin on the vinyl revival. Is there an opportunity for independent retailers to benefit from the resurgence in vinyl?
JA: Audio has always been very central to whatever Sony does. We’ve had market-leading products. Hi-Res is a way of bringing profit back into the audio market for retailers. One of the challenges with Hi-Res is content. What the PS-HX500 enables you to do is to make digital recordings of your vinyl collection.

For us, the important thing is how do we get quality listening back into the audio market. If people are listening to audio, whether it’s their old vinyl recordings, CD, streaming or downloads, it’s about how we can get them to listen in higher quality. If we can do that, there’s a great opportunity for retailers to sell people up. We want independent retailers to sell more audio – we think there are good, stable margin opportunities.

It’s easy to go down the price route, but it will have consequences.

Our role is to make great consumer experiences available through new technologies and we need the retailers to be well trained and enthusiastic in order to convert customers in the final six feet inside the shop.

Nothing ventured, nothing gained