After more than 30 years in the consumer electronics industry, Gordon Dutch has stepped down this month as the managing director of distributor Peerless-AV. In an exclusive interview, he tells Sean Hannam why he’s made the move and how, if things had worked out differently, he might have ended up selling guitars, motorbikes and boys’ toys…

Gordon Dutch is sat in his office, with his feet on his desk, playing the funky lick from the Doobie Brothers’ Long Train Running on his Gibson Les Paul Studio guitar.

“This is one of my classic guitars,” he tells ERT.

“I love music – I used to be in several bands and we played in a lot of cool clubs in London. I played Earls Court and I made a few albums. I’ve just put a studio in my house and I have a collection of 20 guitars – I used to have 40.”

So is he a frustrated rock star?

“Oh yeah, I always have been… If I had my time again, I’d like to have invested in a business where I sold guitars, high-end motorbikes and boys’ toys – all the things that I love,” he says, laughing like an overgrown schoolboy.

“I am basically a 14-year-old trapped in the body of a 50-something-year-old.”

He might not have made it big in the music business, but Mr Dutch’s passion for audio has led to a highly successful career in the AV/CE industry.

Now, more than 30 years later, he has stepped down this month as the managing director of Peerless-AV EMEA – the company that was formed when his business, BBG Distribution, merged with US AV stands and mounts manufacturer Peerless Industries in 2009.

He will remain on the board in a non-executive capacity, but his younger brother, Keith, has taken over as managing director.

“I’ve worked bloody hard over the past 30 years,” he says. “After working for yourself and training a cracking support team to do all the roles that are required, if you feel fully confident in them and the future of the business, then you just know when it is time.

“I’m hopefully going to enjoy a little bit of rest and relaxation, do some more music and get myself fit again.

“I’ve got a wife and two grown-up boys and I want to try to spend more time with them, but I am going to continue working in the business.

“I genuinely love the industry. I’ve met some of the nicest people you could meet and I’ve also met a few who weren’t so nice. It’s good fun and I’ve built a lot of strong relationships and friendships. 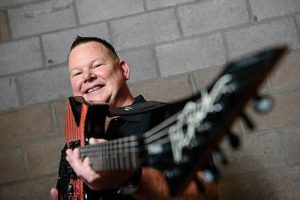 “Even if people don’t like me, I hope they respect me and what I’ve tried to do – I’m a bit of a character and maybe I’m not to everyone’s taste. I built my business from nothing, through hard work and determination, and I’m very proud of what we’ve achieved.”

Q: How did you get started in our industry?
Gordon Dutch: I started in the industry over 30 years ago. I left school in 1980 and went to work in law, briefly, and then left to go and play in a rock band – much to my parents’ disapproval.

In 1982, I went to work for Ketts – the largest independent UK retailer at the time. By 1987, I was the manager of their largest brown-goods store, which was in Watford.

When Rumbelows bought Ketts, I decided to go and work for myself.

In 1990, I opened my first retail store – Prestige Car Audio, in Rayners Lane. That established us as the place to get your car fitted out – we did a massive amount of work with a lot of celebrities and we pimped-up some pretty outrageous cars. Prestige grew and we won a lot of awards.

Q: Can you tell us about BBG Distribution, which you founded in 1993? How did that come about?
GD: The name BBG stood for Bob, Baz and Gordon.

I took out a £5,000 Barclaycard loan for ‘home improvements’ because no one would lend us any money – and we became the number-one car audio distributor in the UK.

In ’96 we moved into home audio and were best known for the Nakamichi brand, which broke the mould – it had the first hang-on-the wall hi-fi and the first ‘stylised’ hi-fi.

We did a good job with that and then we moved into accessories – I saw the future of flat panel TV and we were the first company to distribute and sell a universal mount for TVs.

In May 2009, we merged with Peerless, which was the start of the next step up for BBG. We’d had a few issues with suppliers, the recession was starting to hit quite hard and I realised that the role of the distributor was becoming more and more difficult because the market had changed.

The reality was that unless you were part of a manufacturing company and you owned the brand, then it was very difficult to have the longevity that you needed for the business and your staff.

The opportunity to merge with Peerless was really too good to miss.

I joined the global board and I bought some shares. It was a great opportunity to be a part of a much larger company.

BBG effectively became the Peerless distribution hub for EMEA and was wholly owned by Peerless.

Q: How has the role of the distributor changed over the years?
GD: If you look back to ’93, when BBG first started, distribution was more accepted as a business model.

Brands were smaller and so was the consumption of products and some of the ‘power brands’ [big CE brands] were being distributed across Europe.

We’ve now seen a shift to the brands coming in directly or acquiring distributors, which has changed the model – they’re investing heavily in their own infrastructures. Of our biggest competitors from when we started out, most of them are no longer with us.

Q: Why do you think your company has survived?
GD: In ’93, we started in a recession, but we had car audio, which was a hot product, and we led that market.

We’ve survived because we’ve always focused on a top-down selling mentality – best, better, good – B.B.G, funnily enough, and we’ve always tried to see what the next big thing is.

The success of BBG and Peerless has been that we always keep an eye on trends, we always give quality service and we’ve always been very straight – we’ve been extremely loyal to the specialist electrical retailer.

We don’t deal with supermarkets and the large online retailers that will sell anything to anyone for any price.

We want to make sure that when we sell a product, it is sold through quality retailers that can give the consumer the advice that they need. 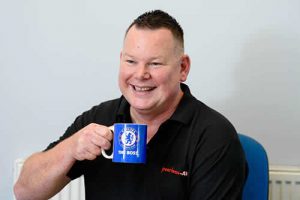 Q: Are you worried about Brexit?
GD: The reality is that the price of goods is going to go up – you’ve already seen that.

According to a recent survey I read, the majority of businesses have either increased prices or cut jobs or investment.

We’re in an industry that doesn’t generally accept price increases – it’s going to be interesting.

I think that the people who focus on selling higher-end products and who continue to add value through offering extra service will be less affected. If you sell on price, you will be more affected, because if prices go up, you’re going to come up against a problem.

Q: Can you update us on the current Peerless-AV business? You’ve moved away from the traditional CE sector and have stopped working with some of the lifestyle brands you used to, haven’t you?
GD: Yes, we have. We’ve always thought very heavily about how and why we do things. The reality is that the role of the distributor is becoming more difficult – we wanted to focus on Peerless and accessories.

Stepping away from some of the third-party brands – we still have some – has allowed us to focus more on Peerless and our export business has gone from strength to strength and our retail business has improved.

In April this year, we renamed our company Peerless-AV. The BBG name is no longer.

Our main focus is to grow our Peerless mounts business, which we’ve done – we’ve always been strong in the UK and with Peerless we’re replicating the success of BBG here and across Europe.

Peerless mounts are our number one focus and Peerless cables and cleaning and other accessories are number two.

We also sub-distribute some other brands because they fit with our profile – Munari, which is Italian, handmade AV furniture, and Norstone – a French furniture brand.

Those are longstanding relationships that we intend to continue.

Digital signage and wayfinding [information systems] are key areas for us – we do a lot of work with large retailers all over the world, from fashion to electricals to fast food.

If you go down Oxford Street, virtually every department store has some of our product in the window.

Even in the White House, there are two Peerless FPZ-600 trolleys [for TV screens] next to many of the leading US politicians when they are giving speeches.

Q: You started out in retail. In your opinion, which electrical retailers are getting it right?
GD: I admire Hughes – they’ve done a fantastic job. They have a good management team – Robert and Jeremy Hughes are very switched on, clever guys.

Hughes has an excellent financial infrastructure and they’re a great company – they spot trends.

I’d like to think that we’ve always stuck to our guns. We’ve said what we were going to do and, rightly or wrongly, we’re still doing that by supporting the specialist retailer.

The successful retailers I’ve seen have been the ones that have invested in large, flat-panel TV and high-end white goods and moved to larger stores that can offer a wider choice of products.

Retailers like Hughes, Purewell and Stellisons – they’re great. They’re independent retailers that have got the footprint to offer everything.

Q: You’re also passionate about training, aren’t you?
GD: I like to feel that we’ve been very innovative in training.

We’ve brought skill sets to the industry – in in-car and home audio and accessories – and we’ve focused on fun.

The problem with a lot of the training that’s given is that it can be a bit boring. I’d like to think that we add a bit of fun to everything we do.

We’ve been at the forefront of industry training for many years and we will continue to do that for the retailers that support us.