Darrell Huggins, group chief executive of Chinese manufacturer IAG, which owns classic British brands Wharfedale, Quad and Mission, tells Sean Hannam how Asia has saved the UK hi-fi industry and why it’s time to put some fun back into the audio market…

You could say that Darrell Huggins is an international man of Mission.

Dressed in a sharp grey suit and looking immaculate, the group chief executive of Chinese audio company IAG, which owns Mission, Wharfedale, Quad, Audiolab and Luxman, has just flown in from Shenzhen to meet ERT at high-end London hi-fi store KJ West One.

However, he won’t be in the UK for long – he’s also got appointments in Sweden, before heading back to Asia and then to Las Vegas for CES.

Based at IAG’s global headquarters in Shenzhen, during the week and living in Hong Kong at the weekend, Mr Huggins has more than 20 years’ experience in the audio industry. He worked at Armour for 17 years and was responsible for setting up and developing Armour Home Electronics Asia.

In September of last year, he left Armour and joined IAG – the Chinese-owned manufacturer of domestic and professional audio products, which has a state-of-the art 400,000 square metre facility in China’s Jiangxi Province.

Sat on a leather sofa in a dem room at KJ West One and flanked by a towering pair of Quad flagship ESL-2912 electrostatic speakers, Mr Huggins says: “I travel all over – I was in Vietnam and Japan for the past couple of weeks and two months ago, I was in Poland and Russia, where they’re seeing a huge increase in their traditional hi-fi stores – there aren’t many places in the world you can say that about.” 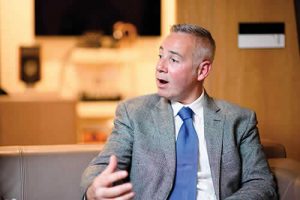 He adds: “One of the things that’s disappointing about some of the specialist hi-fi stores is that they seem to be reducing the number of brands that they have in-store. It’s not just in the UK – you’re seeing it all over Europe.

“I see the UK hi-fi market as being healthy, but it’s transitioning away from traditional hi-fi into streaming and wireless speakers. The biggest guys out there are Richer Sounds – they’re doing a fantastic job.”

In October last year, IAG appointed Exertis Unlimited as the UK distributor for its Mission brand.

Commenting on the move, Mr Huggins tells ERT: “We’re hoping that Exertis will allow us to get our products into the more mainstream electrical retailers. We never would’ve been able to do that as a business in the UK with the current set-up.”

Q: You’ve worked in the audio sector for over 20 years and you have a technical background, don’t you?
Darrell Huggins: Yes. I started out with a privately owned, car audio accessories company called Autoleads. I was there for two years and then Armour purchased the business. It ploughed a lot of money into us and within a couple of years, we turned a £3 million business into an £18m one. I was the technical director.

In 2003, the market for car audio plateaued, so we had to start looking for other sectors. A lot of our car audio dealers were trying to move into home audio, so we started looking into that. In 2004, [distributor] Veda, which had QED, Goldring, Systemline and Milty, came up for sale and we purchased it.

Six months later, I transferred from automotive to the home side. I was very good at project managing, but I had also had a lot of experience of working with Asia – designing and developing products in the UK, but having them manufactured in Asia.

Q: So, after 17 years at Armour, why did you decide to join IAG?
DH: I set up the Armour Home Hong Kong office in 2007. It started out as quality control, project management and liaising between the UK and Asia, but then we took on sales. We became the Asian hub. I did it for nine years, but it became a bit mundane and boring – IAG came along and said, ‘we need somebody like you’…

It has superb brands that have a great heritage. I joined on September 1, 2016.

Q: How is it working out for you?
DH: I’m still smiling [he laughs]. It’s a fantastic opportunity and something for me to get my teeth stuck into – it’s awesome.

Q: What do you see as the main challenges?
DH: There is a big challenge. Wharfedale Pro has picked itself up in its domestic Chinese market, but hasn’t concentrated too much on its international markets – there’s such a huge potential.

Q: IAG is a Chinese-owned manufacturer and many of the brands that it owns have a strong British heritage – in the case of Wharfedale and Quad, they date back to the 1930s. How do you ensure a successful Anglo-Chinese partnership between British audio expertise and Chinese investment and manufacturing?
DH: The owners of IAG – Michael and Bernard Chang – started out by distributing hi-fi and speakers. They’re very interested in the audio business personally and it’s their bread and butter.

To own UK brands is absolutely fantastic for them – it’s a great opportunity, they’re still very interested in audio and they’re still looking for acquisitions. 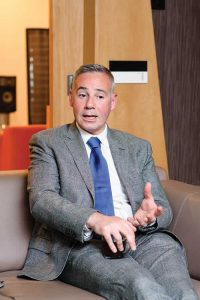 The challenge is to make our products better – our competition is fantastic – they’re also very good at their jobs. That’s what makes it hard. Making and bringing out a £200 box that’s better than everything else in the market is a huge task. We’ve been putting a lot of effort into changing our loudspeaker and tweeter designs.

The key thing about us keeping our brand identity is that we have a British sound. Around the world, that’s very important. The British sound is clean and warm – most markets do actually prefer the UK sound.

Q: Has Chinese investment and manufacturing saved the British hi-fi industry?
DH: Oooh [sharp intake of breath]. I suppose it has, but if you look at Mission, it was manufacturing in Malaysia when IAG purchased it. Asia, on the whole, has helped to support the brands and helped them to survive. It’s also been good for the end-user because the quality and the products that we can deliver today for £160 would’ve cost £300 10 years ago. We’ve been able to bring down the pricing quite substantially and perhaps even improve the quality, because we’re able to do long runs rather than being a cottage industry. Our Asian owners want the business to work and they’re fully supportive of the management team – they’re very good to work with.

Q: Can you talk us through some of IAG’s many brands?
DH: With Mission, Quad and Wharfedale, the technology is very different within each of the three brands – we don’t develop a drive unit for Mission and put it into a product from one of the other brands.

Mission has always been a conceptual brand, but it’s also about fun and sound performance – it’s fast, energetic and very responsive. It’s a brand that we’ve always put technology into – whether it’s the magnets or the drive units or the cabinets – and we’ve always had fun with it. We’re working on some fantastic new designs at the moment.

Quad is not just a speaker brand – it’s the only brand we have that does everything – electronics, amplifiers, CD players and a vast array of speakers. Quad speakers are all about precision and delivering fine detail and concert-like performance.

That’s what the originator of the speakers, Peter Walker, tried to do when he invented them – he was into concerts and live music and with his speakers, he tried to reproduce that. That’s what we still try to do to this day. We make the panels for the ESL speakers in China, but we use all of the original equipment. We’ve tried to improve on some things, but we still follow the brand’s original ideas when we’re developing new products.

Eighty-five years ago, Wharfedale’s founder [Gilbert Briggs] came up with an efficient loudspeaker, driven by his wish to have a product that reproduced a thrilling sound. We still try to do that – we want a room-filling, thrilling sound, whether it’s stereo or even video. It has that wow factor.

Q: With your technical background, are you very hands-on when it comes to developing the products?
DH: Yes. We’ve got some fun products coming along that I’m super-excited about.

Q: Fun seems to be a word you use a lot… Do you think that sometimes fun gets forgotten when it comes to hi-fi products?
DH: Absolutely, I think so – it should be fun. We need to show our enthusiasm and project that to consumers. The fun thing now is that there’s so much music available in so many different formats – there are more people listening to music now than ever. It’s fantastic for the whole industry.

Q: Let’s talk about some of the current trends in the audio market, such as wireless transmission and Bluetooth. Are they important to your brands?
DH: Yes, but one thing we didn’t want to do, particularly with Wharfedale, was to just launch a Bluetooth speaker as a me-too product. We put a lot of time and effort into studying the technology and what the market wanted. We didn’t want to jeopardise the sound quality – that was the key factor.

With Quad, we have iOS and Android app control with the Artera Link and Play products, which gives you full control and functionality, including CD, Bluetooth and UPnP. It’s all about giving end-users the flexibility to listen to whatever music format they have.

Q: What do you see as the big audio trends for this year? Is voice control something you’re looking at?
DH: We are looking into it and we’re looking forward to Bluetooth 5.0 and seeing how we can put that into our products. I think that will make wireless connectivity fantastic. There are reports of a 100-metre range and of multi-room… it would be absolutely superb. Bluetooth is now extremely reliable compared with networking –unfortunately, networking is only as reliable as your connection. In the outer-flung parts of the UK, internet speeds aren’t so great…

Q: Did you predict the return of vinyl?
DH: I don’t think anybody did. It’s been fantastic. We’ve launched a new Quad product – the QC-24P dedicated valve MM/MC phono stage – and we probably will always include a phono stage in the new products that we launch. It’s extremely important to us.

We have very high-end turntables under the Luxman brand, but it would be nice to deliver a more cost-effective turntable.

Q: How do you see 2017 shaping up for IAG and its brands? Have you got aggressive targets to achieve?
DH: Yes, we have – and we should be achieving them as a business, with our brand awareness and their worth in the marketplace.

Q: Are you worried about the effects of Brexit going forward?
DH: The biggest challenge we have with Brexit at the moment is the falling pound and the effect it’s had on our European distributors and customers – it’s easy for them to go online in the UK and get it almost 20 per cent cheaper. It doesn’t really affect big tower speakers, but it has had an effect on anything that’s small and compact and easy to ship.

Q: What’s your take on the smart home? Does it interest you?
DH: Yes, it does. It’s lifestyle and more affordable for people. I think it’s very buoyant and an exciting and fun future for us.

All I have to do is stream…