Harvey Norman chief executive Blaine Callard has steered the Australian department store chain to its first profit in Ireland for 13 years, overseen a €750,000 refurbishment programme and got it on track to open its Tallaght retail park outlet in south Dublin in 2017. But will it ever move into the UK? Simon King finds out…

Blaine Callard is in a bullish mood as he sits down to talk to ERT at the Harvey Norman store on The Park in Carrickmines, south Dublin. And so he might be, as he has just steered the business to its first profit since the Australian retailer, which sells electricals, computers, furniture and bedding, came to Ireland 13 years ago.

Chief executive Mr Callard talks us through the €400,000 refurbishment of the store’s computers and electricals area due to be completed by Christmas, and the €350,000 refit of its outlet on the Nutgrove Retail Park in Rathfarnham – a suburb in Dublin. Proof, if proof were needed, of the company’s commitment to the Irish market.

But would the retailer ever consider launching in the UK?

“The UK market has become a bit of an aberration – there are three things happening that would not provide fertile soil for any new retailer into that market,” says Mr Callard.

“The first thing is that Amazon continues to butcher prices, making no money and adding no value to the industry, either directly or through the Amazon Marketplace. And, unfortunately, in the UK, that’s a particularly toxic effect. There is no competitive advantage to being cheaper anymore – you’re not going to grow a business based on price. I don’t think Amazon is bringing any value to the channel.”

“I think a lot of UK retailers fell asleep for a decade to wake up and find online retailing accounting for 25 per cent or more of the market. That doesn’t make the UK an attractive market. Even in the United States, less than 10 per cent of retail is done online.

“There is one massively dominant player in the UK, which is very unhealthy. After Best Buy, which I think is a good retailer, came into the UK with all its global clout, only to flee with its tail between its legs, I’m not in a hurry to rush to the UK. That said, I think my model would do well in the UK, but I think that I’d bleed a lot to get to sustainability. I think there’s probably low hanging fruit for Harvey Norman globally, rather than entering into a cage fight in the UK.”

And what does he think about the UK’s Brexit decision? Mr Callard says: “Brexit in itself is not what’s spooking people – what’s spooking people is uncertainty. After the honeymoon for the ‘Leave’ supporters, the hangover will set in with inflation, rising unemployment and the UK staring down the barrel of a hostile Europe.

Q: How would you describe the race to the bottom in terms of retailers dropping prices? 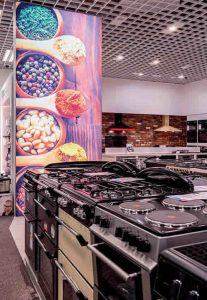 Blaine Callard: If you look at the consumer electronics industry over the past 10 to 15 years, we’ve slowly wrapped a rope around our neck and we’ve started to hang ourselves. We’ve bled the margin out of the industry, a whole bunch of indies have gone to the wall – good indies. Multiples are struggling and products have been commoditised.

We’ve shot ourselves in the foot because we’ve forgotten what we were trying to do in the first place, which was not to flog a whole bunch of stuff cheap.

I think the consumer electronics and IT industry needs to start thinking about what kinds of stores are going to inspire and engage consumers.

Q: Are some brands driving prices down?
BC: If you look at the printer category, what people now pay for a printer is between €50 and €100 for a bit of shi**y plastic – and that’s a problem. What we have done is trained the world that a printer is worth €50 and €100, because we’ve decided we’ll make the money out of the ink later. Good luck bringing out a €600 printer and expecting people to pay for it.

Q: Are retailers nervous of high price points?
BC: We’re selling the Dyson Supersonic hairdryer, which is priced at €399. I take my hat off to James Dyson – one thing he understood was that stuff couldn’t be given away, as there’s no sustainable future for anyone in that.

There are plenty of consumers that will pay for a beautiful piece of equipment like the Dyson Supersonic. Before Dyson launched it, how many people would have paid €399 for a hairdryer? Then along comes James and his team and now they will.

We do not have to be afraid of some of these higher price points and show people nice kit. Over the past five to 10 years, there’s been a race to the bottom with price points and margins and what has happened is actually stores are full of a lot of cheaper stuff.

Q: What consumer trends are you noticing?
BC: In some categories, we are seeing price points lift and products are getting better – and we’re seeing people wanting to invest in better things. Cooking is a great example. From our experience in Australia, Australians have gone mad for cooking in a way that very few other countries have experienced. Even in the UK, which features a number of cookery shows, it’s still not at the same fever pitch as it is in Australia. 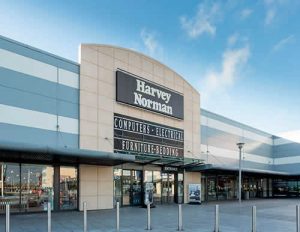 In Australia, no one will get out of bed for a cooktop that costs less than $2,000 (€1,400) – everyone wants high-end gear in their kitchen. That’s not the cooking appliances that the wealthy want, that’s what everyone wants. In Australia, we sell coffee machines with retail prices of €2,000 and €3,000.

Q: Can you tell us about Harvey Norman’s turnaround in Ireland?
BC: Sales were up 10.4 per cent for the year to the end of June. And we recorded a trading profit in Ireland for the first time. Trading profit for the financial year in Ireland was €540,000, compared with a loss of €5.28 million in the previous year.

The whole team at Harvey Norman Ireland has done an amazing job and there is a real sense of accomplishment in bringing the business back into the black, although the market is still tough. The business is broadly continuing on-trend and I am optimistic about the full-year ahead.

Q: What is the biggest challenge you face?
BC: The biggest challenge I have is that manufacturers aren’t bringing us enough of the right product. During the economic slowdown, product pipelines were turned to ‘safe’ – stores ended up with ‘safe’, bland products at average price points and now customers aren’t inspired.

We need to inspire people. It’s not just about showing people more expensive stuff. We want to show customers beautiful things that they fall in love with, where the price becomes less important.

Apple is the brand that has done that best over the past 10 years. Dyson has done a pretty good job with that, as well and Nespresso. Some brands have got that, others haven’t.

We’re trying to push our average sale price up. ASPs across electrical is €200 – it’s 60 per cent higher in Australia. I’d be happy if I could raise the ASP by €50 to €60. That doesn’t sound much, but that’s actually quite a lot higher than across the whole business.

Stores that see themselves as distribution mechanisms for products are walking dinosaurs – they’re not going to survive. We’ve got to stop thinking about shops as where you go to get the things you need – that’s buying, not shopping. Shopping is a recreational activity.

Q: What are your plans for future stores?
BC: We’ve bought a retail park in Tallaght, which was built in 2008, but never opened. We will open the Tallaght store in March 2017. Harvey Norman has a US$2 billion property portfolio, which is a key part of the company’s model. Before we purchased the Tallaght store, we had previously never owned property in Ireland. The cooking area in the Tallaght store will be 50 per cent bigger than in Carrickmines.

We will possibly add another two Dublin stores. We’re in some quite small towns in New Zealand and Australia, where we do very well. We might throw our hat into the ring for the two Dublin Airport terminals [which are currently operated by Dixons Carphone], as I reckon we would do very well there.

I am actively looking for other locations, but I need support from the board in Australia. We are not talking one store every two years – we are at break-even now, so I’m bullish. If I can get support from our board and from Katie Page, Harvey Norman’s group chief executive, and if Brexit doesn’t derail consumer confidence too much, then I’d be looking to get another few stores opened quickly on top of Tallaght.

Sell the service, not the product