Panasonic UK managing director Andrew Denham has plenty to be happy about. He tells Sean Hannam how the Japanese manufacturer is enjoying good growth in audio, has relaunched the iconic Technics brand and got its mojo back in TV picture quality

“You’re going to salivate over the new Technics turntable,” says Panasonic UK managing director Andrew Denham to me, as we’re sat on the sofa in the high-end Technics listening lounge, which is in the basement of the company’s HQ in Bracknell, Berkshire.

He’s even let me bring some of my favourite albums to play on the direct drive SL-1200GAE – one of 900 limited-edition models available outside of Japan. The 300 pieces for the Japanese market sold out in just half-an-hour.

A new, non-limited-edition model – the Grand Class SL-1200G – will be available in the UK this autumn, for those who were not lucky enough to get their hands on its more exclusive predecessor. It will cost just under £3,000 to buy.

For our listening session – the turntable has been set up with a Technics ST-G30 music streamer and SU-G30 network amplifier – I have chosen some Beatles LPs, including Revolver and Abbey Road, which is a spooky coincidence, as Technics is about to announce a partnership with the famous London recording studio where the Fab Four made their masterpieces. Abbey Road will be using Technics turntables in its mastering suites.

Says Mr Denham: “We teased the turntable at the IFA show in Berlin last year – it’s been a work of passion, dedication and love from our engineers. They’ve re-engineered it from the bottom up – without compromise – the pre-orders we’ve received have been exceptional and the reviews have been tremendous so far.

“It’s great that the market has recognised that it’s not just a relaunch of the old Technics turntable – we’ve moved onwards and upwards. It’s very much about re-establishing the Technics brand in high-end audio – we’ve started that journey, but we haven’t finished it.

“With an increasing appetite for high-res audio and digital streaming – Technics Tracks – it’s also about how we bring out products that allow you to get the best out of it. High-resolution audio is the primary reason behind the relaunch of Technics, but, of course, we can’t deny that vinyl is vital, too.” 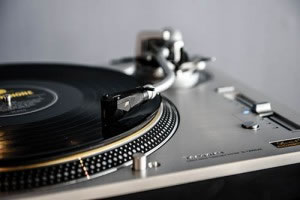 Looking at the wider audio market for Panasonic, Mr Denham tells me: “We’ve had a great year in audio – we’ve seen double-digit growth year on year – and the resurgence of high-end quality audio has been long overdue, in my opinion. AllConnected [Panasonic’s wireless speaker system] is starting to bed in. The [multi-room] market is tricky and there’s a finite amount of people who are looking for multi-room.

“It’s about listening to their needs. Simple things like multi-room streaming of CD have really resonated with consumers and the continuous expansion and extension of our AllConnected portfolio is really helping. This year, we’ve strengthened it again with waterproof and outdoor products.”

As The Beatles play in the background, I ask Mr Denham if he predicted that vinyl would make such a huge comeback?

“No, I should’ve done. My 17-year-old son did,” he says, laughing. “He came back from a Saturday shopping trip with a little bag of vinyl last year. He knew I had an original Technics turntable, but I had to show him the ceremony of playing a record – he didn’t know there was an A and a B side! He now wants me to buy the new Technics turntable, so he can have my old one. Vinyl is making music personal again, which is terrific.”

Q: How’s the year started off for Panasonic?
Andrew Denham: The past 12 months were challenging, if I’m honest, but we turned a corner at the beginning of January and it’s really accelerating. We’ve got the right products. It’s very important to be on the money with design and specifications – and we’ve got a high degree of confidence that we’re going to rebuild our market position. Last year, we made some choices that weren’t the right ones and we weren’t able to capitalise on the changes in the market. The 4K market was growing very strongly and while I think we had great products last year, they weren’t quite at the level we needed to achieve strong accolades. Consequently, it was tougher for us to get the share. This year, we have transformed the line-up and we have 4K native Blu-ray – and it’s the best 4K Blu-ray in the market.

The catalyst was our convention in Frankfurt [in February 2016] – it was a springboard for the new line-ups. We’ve managed to get our TV range out earlier than we had done for a long, long time and I think in terms of optimism, there’s a lot of positivity in the market. We had an excellent response to the new line-ups in Frankfurt, which has followed through to display plans and orders.

The biggest thing is that we’ve got our DNA back in picture quality. We struggled when we moved from plasma, which was our heritage. The launch of the new 900 series has been a defining moment. It’s been quite gratifying that the reviews have backed that up. 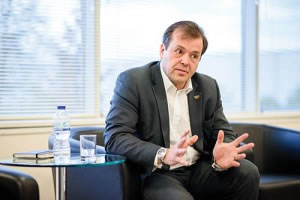 It’s all about delivering the best possible performance. We’ve still got some exciting products to launch – like the 800 series – and that’s a real departure for us. Looking at not only picture performance, but also making the product a design icon, which has been welcomed by retailers.

There’s also a big focus on sound quality – it has a separate high-performance, soundbar-style speaker that’s amplified by the TV. If we don’t get TV right, we don’t have a good year. It’s very, very important.

Q: Panasonic unveiled a curved 65in 4K OLED TV at IFA in Berlin last year and you launched a limited quantity into the market. Can you give us an update on your strategy for OLED?
AD: That was all about understanding customer demand and price elasticity around the proposition. It’s an area we’ll continue to review on an ongoing basis.

Q: You’ve just launched your first 4K UHD Blu-ray player – the UB900. Will that be a mainstream product, or will it be adopted by home-cinema enthusiasts?
AD: The demand has taken us by surprise – the step from DVD to Blu-ray was not as dramatic for the consumer as the step up to 4K native Blu-ray. It’s so dramatic I think people are prepared to take that step. 4K native Blu-ray is really helping to underpin our credibility in terms of picture quality – we’ve come at it from a top-end image and audio perspective.

The message is simple: ‘it’s the best – don’t compromise on performance’.

Q: Panasonic is an official Olympics global partner and will provide visual technologies for the Rio 2016 Olympics and Paralympic Games. You’ve also launched an online consumer campaign called Superfans…
AD: What 2012 showed us is that the British public made a massive difference to the fortunes of Team GB. There’s a huge appetite in the UK for the Olympics and for celebrating the endeavours of the British team. That’s why we wanted to focus our investment on the British Olympic Association (BOA) and its Superfans initiative – check out #superfans.

Q: This year’s summer of sport is a massive opportunity for retailers, isn’t it?
AD: It is. We all know the seasonality of the market – particularly around vision [TV] – there’s an emphasis on consumers pulling their purchases forward to take advantage of the football. This year is a special one, with the Olympics, and it allows retailers to shout about and emphasise the relevance of picture quality and performance. It’s worth comparing the performance of different 4K TVs using an HD sports broadcast – you can really see the performance of the upscaling engines, which helps as a sell-up argument. After all, not all 4K TVs are equal. 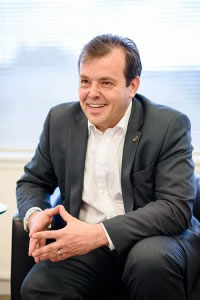 Q: Last year, you announced your move into smart home devices on a DECT ULE platform, rather than wi-fi. How’s that worked out?
AD: Retailers have started getting behind it, but it’s a journey and we’re learning. Our whole emphasis is on ease of use, features and simplicity of set-up – it’s about the Internet of Things that matter. I strongly believe in the robustness of the frequency range of DECT ULE – particularly in the kitchen, where it is really key. Wi-fi can be quite badly affected by electromagnetic interference from kitchen appliances.

Q: Is the home appliances market tough?
AD: Competition continues to increase, of course, but refrigeration is growing slightly more than laundry and small kitchen appliances continue to show dramatic growth. The independent channel remains a very important partner. And for our mid-term plans, we want to increase our presence dramatically in the white-goods market across all the areas and we’re in the process of developing partnerships with a number of key independent white-goods retailers.

Q: You’ve been at Panasonic for 22 years – three of those as MD. How has the brand changed? Is it hard to appeal to younger consumers?
AD: Appealing to younger consumers is still our biggest challenge – I don’t think we’ve done anywhere near enough. The Superfans campaign is all about engaging with younger families and kids.

We’re trying to reach out to first home buyers and renters and be relevant to them, but we’re not really addressing a younger market – we’re not a smartphone business, so we’re not relevant to the kids in the way that those companies are. But, with an ageing population, our brand positioning isn’t such a bad thing – so you could say there’s a silver lining.