‘Turning Point gave us the confidence to change our business’

Rugby retailer Trafalgar Electronics was so inspired by ERT’s Turning Point Summit, it’s converting its small shop, building a smart-home and custom install area and adapting its business. Over the next few months, we’ll be following its progress. Sean Hannam finds out more

A small, family-owned independent retailer in the centre of Warwickshire market town Rugby, it’s selling CE products and home appliances and now wants to make the next step into the world of the smart home.

Its owners – husband and wife Ronnie and Lisa Ashley, who took over the business five years ago, attended our Turning Point Summit and were so taken with what they heard, they decided to take the plunge and look at how they could change their shop and business.

“It gave us the confidence – people were talking about good ideas that had worked and they were saying, ‘it’s the future and it’s happening’. We need to change and appeal to a younger market,” says Lisa – a former pharmacy technician who only moved into selling electricals full-time about three years ago. 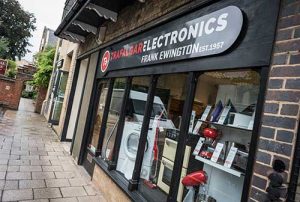 Says Ronnie, whose background is in CE installation: “The Turning Point Summit kicked it off. We went to it and came away excited. We said, ‘right – that’s what we’re doing – we can do all of this stuff tomorrow’. We got so much information. It was great for me – I was thinking, ‘people want this stuff and I can do that’.”

Plans are under way to convert an unused area in the top of the building into a smart-home apartment space and home-cinema dem room.

It’s still very early days. When ERT visited in August, the upstairs area looked like a building site, but Ronnie and Ashley have some ideas on what they want to do with it and are hoping to have it completed by early 2018.

Says Ronnie: “We want to have mock rooms and a cinema room. We want to use it for the smart home and custom install – there are so many things that are available to us.

“I have the skills and the know-how, but my biggest problem is time – we’re trying to run the business, too. We’re struggling, but we know what we want to do and I want to get the ball rolling. With custom install, there’s absolutely nothing that fazes me – I’m excited to do it. We already put lots of tellies on walls and we’ve installed one in a guy’s ceiling that goes up and down with a remote control.”

Ronnie has been in touch with BSH – already one of Trafalgar’s main white-goods suppliers – and is in discussion with the company about selling its connected home appliances in the new smart-home area. He is also keen to stock smart beds that monitor users’ sleep patterns and integrate with apps.

Adds Lisa: “We haven’t got an endless pot of money and we don’t want to go into huge amounts of debt. We also want to get the brands that we want on board.”

Earlier this year, Ronnie visited the Munich High End Show to get some inspiration: “It was great and we saw some brands that we’d love to be dealing with,” he says.

Both him and Lisa also attended a smart-home training session that was run by electrical retailers association Retra, AV distributor AWE and training company T21.

“We want to get on some more of AWE’s courses and find out some more stuff,” says Ronnie.

Trafalgar has already converted a small downstairs area at the rear of the store – nicknamed ‘The Bunker’ – into a dem room for products, including Yamaha’s MusicCast multi-room audio range.

Yamaha provided some printed branded boards to display on the walls and there’s also a Teac turntable on show, headphones from Sennheiser and record boxes for vinyl lovers.

Says Lisa: “It’s a good starting point. We’d like to do more of that kind of thing upstairs – it’s a really good space to do it. We’re dipping our toe in and getting some Yamaha training from our rep.”

Trafalgar has been in its current location – in the shadow of Rugby School, which is one of the oldest independent schools in Britain – for just under two years.

Previously, it was in an out-of-town location, in a residential area: “It was nice, but it wasn’t the best area for passing trade,” says Lisa.

When her and Ronnie took the business over, Trafalgar was solely brown goods and repairs, but they started selling white goods in October 2015, when they moved into the current premises, which for the previous 57 years had been white-goods retailer Frank Ewington. 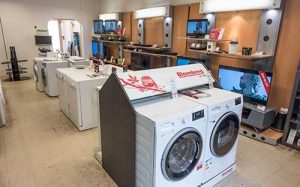 “We wanted to move into white goods and a bigger store – it coincided with Frank Ewington closing down. We moved into the premises and we bought a lot of the stock off them,” says Lisa. Trafalgar’s turnover doubled after it started selling white goods.

Commenting on current CE business, Ronnie tells ERT: “We’re at the point now where we’ve got to make a decision. We can’t do things that we’re making £25 to £50 on. We need to step away and start it [the smart home].”

Adds Lisa: “We want to crack on with it and get it done – we’re ready and we’re keen.”

• We’re adopting Trafalgar Electronics as our Turning Point retailer. Over the next few months, we’ll be reporting on their progress and asking industry experts to offer advice on the smart home, digital marketing and training.

Apathy is a killer – so do something