Since we last visited our adopted Turning Point retailer, Trafalgar Electronics, they’ve got hands-on with smart speakers, and had professional training and advice on sales, marketing and social networking. Sean Hannam reports

There’s a battle going on at Trafalgar Electronics in Rugby.

Husband-and-wife owners Lisa and Ronnie Ashley are playing with rival smart speakers – the Google Home and the Amazon Echo Plus – as part of their plan to get to grips with selling the smart home.

“They’re products that we’ve brought in from our house,” explains Ronnie, who says that, at home, they’ve connected the speakers to smart light bulbs, paired the Echo Plus speaker with an iRobot Roomba robot cleaner so it can be controlled via Alexa, and linked it to Nest heating.

“It’s difficult to sell the products if you don’t know how they work and how they connect,” he says.

“We’ve had an Echo Dot in the shop and we’ve connected it to Yamaha’s MusicCast [multi-room system].” 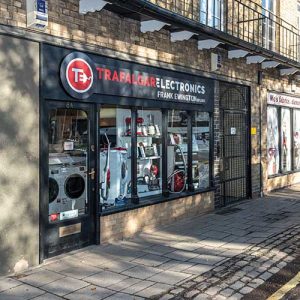 He adds: “We haven’t been pushing the products yet, as we’re just moving into the smart home. We’ll be talking to manufacturers and once we get their products in, we can show people what the products do, how they connect and how they talk to each other.”

So which smart speakers are winning the war? “I prefer Google Home to Echo Plus, but [unlike Alexa] Google Home just doesn’t connect with most manufacturers’ products – they will probably catch up next year,” says Ronnie.

“Google Home is more intuitive and more fun. I was with my daughter and I asked Alexa if it was happy? Alexa said, ‘I’m happy when I’m serving you’ – it was a bit electronic and robotic. When I asked Google Home, it came back with a funny response, ‘I’m over the moon’, which I thought was nice. Alexa will give you the same response every time, but Google will say something different. Google is nicer to talk to.”

Lisa says that voice control is a good way to get into the smart home: “I’m not good with technology, but I get it and I love the heating – that’s the best thing.”

Trafalgar is looking at getting training in the smart home from AV distributor AWE and custom installation (CI) trade body Cedia.

Says Ronnie: “I went to an AWE event – it was exciting. We learned about products from Loewe, LG and Kef – we saw a new smaller home-cinema room – and it’s given me some ideas for our dem room. We’re also going to get some training – we’ve been to Cedia and had a chat.”

He says that it was really positive and that Trafalgar is looking at becoming a Cedia member.

Ronnie is planning to build on his CI background by doing some training: “I don’t know which level to jump in at – I’ll probably start at the beginning. I’d like me and my team to be Cedia-trained,” he says.

Since we last visited Trafalgar this summer, it has taken steps to improve its marketing and online activity and is even looking at rebranding its business as ‘Ashley’s’ to reflect the fact that it’s family-owned.

Says Lisa: “We’re just putting the idea out there to see what people think – we’ll get someone on board to do the branding, as it’s got to look professional and last forever.”

The store has also signed up to sales and technical training from T21, and, thanks to ERT’s involvement, is talking to Euronics-only white-goods brand Blomberg. Its training ambassador Katie Badenhorst visited Ronnie and Lisa to assess their needs.

Trafalgar has been in discussion with Bosch and will be one of the first retailers to stock and sell its new range of smart-home products, including the Eyes outdoor camera, 360-degree indoor camera, smart plugs and radiator thermostats.

They have also spoken with field marketing agency Gekko – training director Kirk Naish went to the store and offered advice about digital and social media and how to start selling the smart home.

Trafalgar says it has also made the most of opportunities in the local area.

Says Lisa: “We were in touch with the Chamber of Commerce. We went to a workshop for Rugby businesses – I found it on Twitter. It was an introduction to marketing, but it was more about networking and talking to other local businesses. We also had a business adviser come in, who did two sessions on marketing and websites and gave us help and advice. I understand marketing, but I don’t know how to begin with it.”

She adds: “We had sales training with T21 – it was great. They came in after work and we got a lot from it.”

It’s been a busy time for Trafalgar. Says Lisa: “We haven’t stopped – we’ve had something every week. It’s like different bits of a jigsaw.”

Adds Ronnie: “With the more modern branding and the smart-home technology, it will all tie in.

“It’s a real ‘Turning Point’ for us – it’s not just about the smart home, we’re redoing the shop and our branding. We’re turning the whole business into something totally different – it’s exciting.”

‘You have to show that you’re the local expert’ 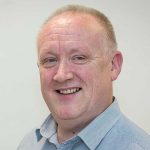 Kirk Naish, training director at field marketing agency Gekko, on why now is the perfect time for independent retailers to embrace the smart home

With the emergence of the connected home, it’s a strong time for the independent retailer, because of the expertise and the knowledge that they have.

A lot of brands are realising that it’s great to be able to sell through the large multiples, but if customers really want to know how to get it connected and make it work, then they’ll still go to an independent retailer.

The crucial thing is that with products now becoming slightly more complicated, it needs someone with knowledge and understanding to be able to explain them – that’s where the independents come into their own.

The brands that we’re working with, such as Freeview Play, know that and are actually trying to understand how they engage with independents. They’re looking for opportunities to present broader promotional activities and incentives, whether it’s through Euronics stores or Retra.

Local knowledge and expertise counts for a lot – people will still happily pay for that service. It’s key that your marketing shows that you’re an expert on a specific area where you know your customers aren’t that clued up.

There are fantastic opportunities, as Joe Public is still trying to get its head around the connected home.

Consumers are dipping their toes in – usually with lighting, because it’s inexpensive – but they won’t do it unless they’re confident it will deliver some value to them.

If you have a selection of Hive lighting, then you can open up opportunities for heating, motion sensors, cameras and installation.

The Hive heating system, which operates on their hub, can be controlled via Alexa – you can tell it to turn the heating on and off.