Stone Audio near Poole was a destination store before the term really became popular. Rob Lane asks MD Alex Scott-Simons why he made such a daring move

Stone Audio thrives without passing trade. Located on a beautifully realised commercial development just off the A35, the independent hi-fi and AV retailer and installer relies on a strong web presence and excellent word of mouth – as well as regular repeat business – to support its burgeoning “destination store” business model.

Acquired in 2006, the land for Stone Audio provided a huge footprint for the development. Completed at the end of 2008, it resulted in a building covering a massive 5,500 square feet at an initial cost of £1.5 million. The specially designed skirting boards alone, hiding 12 miles of cabling and power sockets, cost an incredible £11,000.

“We moved in during the back end of 2008 when things had literally hit the proverbial fan,” explains Alex Scott-Simons (pictured), managing director of Stone Audio. “The world had gone wrong and 2009 was a tough time, but it conditioned me not to take my foot off the pedal – something that has stood me in good stead since.”

It was his sheer determination “not to go backwards” that kept the proverbial wolf (or, in this case, bank manager) from the door in those tricky early years. As he continued to chip away, refining his business model, all of the other local hi-fi retailers fell away, until Stone Audio was the only bricks-and-mortar going concern left. He has never compromised on his hi-fi principles. 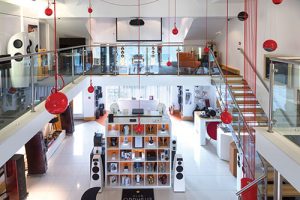 “I poured everything into this and wasn’t going to give up without a fight during those tough few years,” he says. “Now, we are not affected by varying rents, boast a stunning premises with amazing facilities and a £250,000 home cinema demo room. We are now at the end position after a colossal amount of investment. We have the right product, the right premises and the right team and focus – and in a great, accessible area.”

Stone Audio would be the envy of most hi-fi retailers, but it was formed from very humble beginnings. Mr Scott-Simons incorporated the Stone Audio business in his final year at Bristol University studying electrical engineering. While working in the evenings as tech support for AOL and Compuserve, the future MD began building a cast stone plinth for his Garrard 301 turntable. He created a mould and began selling the bases online. Costing 10 times less than their granite equivalents – but still weighing around 30kg – Mr Scott-Simons did business in places as far afield as Hong Kong, allowing him to obtain accounts from cartridge and tonearm manufacturers. Stone Audio was born.

After a few years working out of his parents’ house, followed by serviced offices in Bournemouth, in 2004 Stone Audio moved to Poundbury, the Prince of Wales’s pet housing project next to Dorchester, Dorset – not exactly the footfall capital of the South-West and hardly what you’d call ‘high street’. Space restrictions and a desire to “go high-end, albeit it organically” provided the forward momentum for the move to the current premises.

Stone Audio is a hi-fi shop at heart and Mr Scott-Simons’s passion is two-channel (70 per cent of the business is hi-fi, 90 per cent of that is streaming and £10k to £15k two-channel sales is the shop’s ‘bread and butter’). But the outlet also caters for high-performance home cinema and multi-room systems, with the quarter-million-pound demo room resulting in a lot of £10k to £20k AV systems sales. 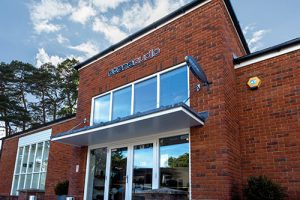 “Cinema has had a hard time recently,” admits Mr Scott-Simons. “We’re not into the soundbar thing – the mainstream. Instead, wherever possible, we try to show people what a true native 5.1 system will achieve. We actually get a lot of people migrating back from home cinema to high-quality two-channel systems and sell a lot that also cleverly support AV – such as the Linn Majik DSM.”

Stone Audio ranges around 9,000 products – more than 140 brands serviced by a permanent team of eight – but it’s certainly not a box-shifting outfit, with Mr Scott-Simons preferring to sell customers something that will “absolutely delight” them, rather than a product that just happens to be in stock.

“We try to give everyone who walks through the door an experience and listen very hard to what the customer wants. Customer service is all-important to me. We’re dealing with a lot of high-end products, so we try to give high-end service as well. We have wonderful customers who keep coming back addicted to this stuff.”

Not surprisingly, more than 90 per cent of customer requests, on entering the store, are for turntables, streaming and home cinema – with streaming and, of course, Sonos, by far and away the main reason for customer visits.

“Most customers want to find out more about streaming systems,” says Mr Scott-Simons. “But, at the same time, a lot of customers have walked in recently asking for a vinyl replay system – amp, turntable and pair of speakers. We are happy to also show them how easy it is to add a streaming system to it – especially Roon.”

According to Mr Scott-Simons, Roon is a streaming game-changer, a complete step-change equivalent to Apple’s introduction of the iPhone in 2007. Although 99 per cent of his customers are yet to see the app in action, when they see it demonstrated, they want it immediately.

This is unsurprising given how intelligently and seamlessly Mr Scott-Simons has incorporated the streaming service into Stone Audio’s demonstration ethos. There are between 10 and 15 different systems set up around the premises at any given time, with many connected to Roon – allowing Mr Scott-Simons to demonstrate the service on a variety of different two-channel solutions.

Indeed, this ‘systems ethos’ is at the core of Stone Audio’s success. Mr Scott-Simons is keen that, at any given time, customers are able to enjoy a demo. So, as well as the dedicated demo room on the mezzanine floor, virtually every single piece of hi-fi hardware within the store is a component of each of these 10 to 15 dedicated, carefully realised systems – ready to go at the touch of a button.

But Mr Scott-Simons isn’t resting on his laurels, with plans to convert a huge office area downstairs next to the main showroom into a new, larger demo suite. The driver behind this desire to expand is threefold. Firstly, the space has “amazing” acoustics – something Mr Scott-Simons discovered by accident when repairing a customer’s speakers there. Secondly, some of the high-end kit – Kef Blades and Quad Electrostatics in particular – is simply too heavy and bulky to continually move up and down stairs from storeroom to dem room.

Finally, Mr Scott-Simons is conscious of the need to be in a position to wow customers immediately with a demonstration – something that isn’t always possible in the dedicated upstairs demo room if the system is currently being rebuilt. The new demo suite will boast two much more permanent, “mind-blowing” super-high-end systems, including a dedicated Devialet 5.1 Phantom system – making Stone Audio the first shop to offer such a setup.

“It’s essential that we have a rotatable dem room, but it can get frustrating when it’s not ready immediately. So upstairs will remain like this – swappable – with the downstairs much more permanent: a breathtaking high-end system always on demonstration. I’ve learnt that you just never know when a customer might walk in and say, ‘blow me away with something’.”

This additional investment comes at a time of uncertainty across all areas of retail, of course, with Brexit, rising inflation and general global instability all applying pressure. However, as was the case during the global financial crisis when he bet the farm on Stone Audio’s Poole premises, Mr Scott-Simons isn’t prepared to compromise. In fact, Stone Audio appears to be riding the storm.

“It’s certainly no good for any retail business to have to suffer these levels of uncertainty, but there’s still a lot of business out there,” he says. “This summer was very busy, with lots of foreign customers coming in, helped by the weak pound, and also the increase in ‘staycation’. Speaking to reps, this summer was generally very quiet – but not for us.” 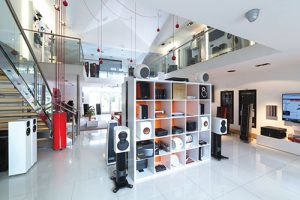 Perhaps the reason for this continued success is as much about Mr Scott-Simons’s hi-fi ethos as it is the desirability of Stone Audio’s ‘destination’ outlet, incredible range of products and systems-in-store MO. In the early days, he always aspired to take Stone Audio into the high end, but his organic approach has kept his two-channel feet firmly on the ground at the same time.

“I’ve slowly, organically, built the business up to the level I want it to be, and also in terms of profile and products – so, that means Linn, Naim and recently SME. I never wanted to be snobby about what we do and never want to say ‘no’ to the customer who wants an entry-level, £1,000 two-channel system. I want to cover all bases.

“And while we do boast a colossal range, from entry-level to high-end, we’re only interested in the good stuff. We take a lot of time and care over what we stock. We listen really carefully to what they say. We’re not afraid to show them something that may be a bit different from what they came in for, but we always sell each customer what’s right for them.”

What you should be stocking this Christmas