‘Our mission is to put music on a pedestal’

At the Spiritland Headphone Bar in London’s Mayfair, you can listen to premium audio products while drinking whisky. Sean Hannam sampled the delights, and asked owner and former sound engineer Paul Noble why he’s entered the world of luxury retail…

When it comes to journalistic assignments, this has to be up there as one of the cushiest of my career.

I am sat in a high-end store in London’s Mayfair, drinking expensive Japanese whisky and listening to some of my favourite songs by Bob Dylan, The Byrds and Nick Drake, on a pair of £1,500 headphones. This is experiential retail at its best.

Welcome to the Spiritland Headphone Bar, which is the latest venture by former sound engineer and radio producer Paul Noble – the founder and artistic director of the successful Spiritland café, bar and studio in London’s King’s Cross.

In the heart of central London, at 3 New Burlington Street, between Regent Street and Savile Row, shoppers can try and compare what are said to be some of the best headphones and audio players in the world.

Stocking brands including Sennheiser, Audio-Technica and Audeze, the shop also offers high-resolution players from Astell & Kern and portable DACs and amps from Chord, as well as products by Naim, Bryston and Questyle. Prices range from £150 to £4,000 and upwards. 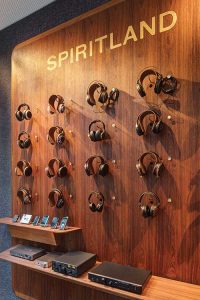 At a time when the high street is under immense pressure and consumer electronics retailing is tough, this is a bold and daring move by Mr Noble.

Q: Late last year, you opened a premium audio and headphones store in London’s West End, which also serves whisky. A lot of people would say you’re mad…
Paul Noble: They might. We opened a venue in King’s Cross called Spiritland in September 2016. It’s a café during the day and it’s a restaurant and a bar at night – it’s built around a very high-end sound system by Living Voice, a British company that’s based in Nottingham. The whole thing started as a way to engage with music in the most meaningful way possible. A big part of what we’re doing at Spiritland [in King’s Cross] is retail – we sell vinyl, books and magazines, headphones, players and amps.

Q: So why open the Spiritland Headphone Bar? Did you see a gap in the market?
PN: It wasn’t as calculated as that…

The quality and the level of reproduction of the equipment is so advanced that you need a room to sit in and listen to it – to spend some time with it to do it justice. You can do that at some points in the day at Spiritland in King’s Cross, but sometimes it’s just too busy. Everything we’ve done with Spiritland is about the pursuit of excellence. Our mission is to put music on a pedestal and in a frame – to give it all the love in the world. The artist has gone through life experiences to write, record, mix and master their songs, and then, at the end of the chain, people are listening to them on a speaker in their phone or their laptop. It’s tragic – it’s a sin. The way we consume and listen to music now is almost stripping it of all meaning. 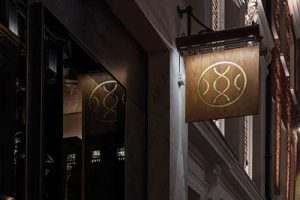 Q: Aren’t some people willing to pay more for a better quality listening experience?
PN: They are and there’s definitely a story around vinyl at the moment – we have some vary lavish turntable equipment at Spiritland [in King’s Cross], but we also have CD players, a Tascam that plays high-res audio and a Revox reel-to-reel. It’s not about the format – it’s about the quality of the recording. When you listen to music in good quality, it’s a revelation – it opens it up.

Q: Are you an audiophile?
PN: Yes – I was a sound engineer at the BBC and I was a radio producer. I’ve always been on an upgrade path. I went to the Munich High End Show one year, I heard the Living Voice room and thought, ‘I’ve got to start from scratch – this is the sound I’ve been trying to get’.

Q: You don’t have a retail background, do you?
PN: No, but I’ve done a lot of consuming and I know how I want to be treated and the amount of time I want to spend with the equipment.

Q: Can you tell us how you went about setting the wheels in motion to open the Headphone Bar?
PN: It started with a conversation with the landlords here [in Mayfair]. They loved what we were doing at Spiritland and the culture around it. It was a year of planning and designing.

The products – the headphones, the players and the amps – are beautiful – but, generally, they are sold in shops by people who either don’t know the stock that well – they’ve been put on the hi-fi stand for the day – or they’re sold next to washing machines and fridges, or they’re in a box, or, more commonly, they’re sold online.

When you’re on a headphone buying odyssey, you do research, you look at a million forums to see what everyone is saying and then you eventually take the plunge – you spend £500 upwards on a pair of headphones without having heard them or compared them with any others. The point is that here [at the Spiritland Headphone Bar] you can hear headphones from £150 to £4,000 and demo them side-by-side. You can plug them into the same amp, listen to the same source and hear the difference. You can hear the different tonal characteristics and feel how comfortable they are.

If you’re travelling on the Tube every day, we can recommend a pair for you, or if you’re going to sit in your man cave, with a whisky and do nothing but listen to music, then we can recommend something’s that’s heavier, more esoteric and lavish. The idea is to sell headphones in the way that you’d sell luxury watches. It’s not pushy – the stuff sells itself.

This is such a small shop – it’s eight square metres – but we’ve fitted it out beautifully and we’ve worked with some amazing design talent to maximise the space. It’s unlikely we would’ve done this anywhere else in London – it could only have been Mayfair or Soho. 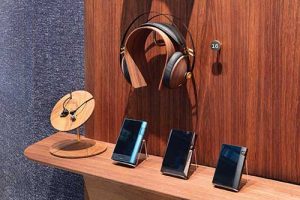 Q: The rates and rents for the shop must be astronomical?
PN: No comment [he laughs].

Q: The store opened in October 2017. How’s it been doing?
PN: It’s going really well. Some people will come in and buy quite an expensive pair of headphones quickly, once they’ve heard them, but others will have a demo, um and ah, go off, read up online and then come back and buy.

Once people have seen the store, they can see what we’re trying to do – it doesn’t really have a lot in common with any hi-fi stores.

Q: Why did you decide to combine premium audio with whisky?
PN: The whole thing is a sensory indulgence. 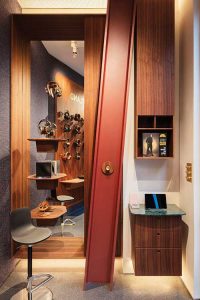 Q: How did you choose which audio brands and products to sell?
PN: It was down to years of listening and demoing. The brands have understood that we’re doing something distinctive and we are showcasing their equipment right in the middle of central London, in a beautifully fitted store, with knowledgeable and friendly staff. It’s niche and esoteric, but the people who love it, or are interested in it, have been supported. We want to work and collaborate with brands, but every piece of equipment in the shop has to earn its place.

Q: Any plans to open more Spiritland Headphone Bars in other parts of the UK?
PN: Not elsewhere in the UK, but elsewhere in the world – I feel it’s something that could translate to New York, or Hong Kong, or a select duty-free zone. There’s a reinvigorated appetite for listening to music in good quality and to listen to an album from start to finish with headphones is a joy and a luxury – it’s so immersive.

Roon with a view

January sales improve slightly but retailers need to get digital