Roberts Radio – the winner of this year’s ERT Award for Brown Goods Supplier of the Year – recently announced its entry into the premium audio market with the launch of its R-Line sub-brand, which includes its first multi-room products. CEO Owen Watters tells Sean Hannam about its latest move

Radio manufacturer Roberts will launch its first premium audio products under the company’s R-Line sub-brand in April next year.

The move also signifies its entry into the multi-room market – the new devices can be used individually, or as part of a multi-room wireless streaming system, with wi-fi or Bluetooth. Spotify Connect is built-in, as well as internet radio and DAB.

The products can be controlled by using the open-source UNDOK iOS or Android app, which has been developed by Frontier Silicon, which makes chips, modules and software for digital radio.

ERT visited the company’s headquarters in Chertsey, Surrey, to find out why Roberts has introduced R-Line and moved into the premium audio market.

Q: What’s the thinking behind R-Line?
Owen Watters: It’s premium audio from a Roberts perspective. We have a huge heritage in radio and, to date, we’ve only produced two products that don’t have a radio tuner in them – two Bluetooth speakers. We’ve looked at the radio market and the reality is that it’s still performing reasonably well, but we don’t know what state it will be in in 10 or 20 years’ time. But one thing we are certain of is that if we don’t evolve our business, it will be in a very different place in the future. 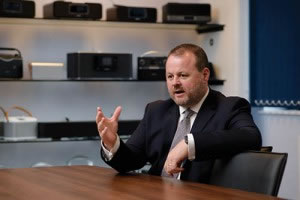 People are consuming music in very different ways. Services like Spotify and others have engaged with a certain audience – people are now consuming more music than ever.

Currently, unless you include three or four of our internet-connected radios, we’re not really playing in that space. We’ve had huge growth in the internet radio market – we have over 70 per cent of the market, which is a huge achievement. That was quite instrumental in our decision to move into premium audio. It gave us confidence that consumers are comfortable buying [other] technology from Roberts, as well as what some people may perceive as ‘traditional’ products.

We’ve tried to demystify internet radio and make the user interfaces as intuitive as possible, so that we can take the fear factor away from some customers.

Q: With R-Line, you’re moving into multi-room audio for the first time…
OW: There are a few big players in the multi-room space – Sonos is doing a fantastic job at leading the market – but there’s no offering for a Roberts consumer. There are Roberts consumers out there who want to buy multi-room systems from Roberts. They trust the brand and its heritage in the audio space and we think we can add something to the party.

It’s not about us becoming a direct competitor with some of the global heavyweights – it’s about us playing in the same arena, but putting our own little twist on it. We’re not a mass-market brand and we have no desire to be one – we pride ourselves on the fact that we make high-quality products that will last, perform and exceed people’s expectations.

We’ve had huge growth in internet radio – we have over 70 per cent of the market. That was quite instrumental in our decision to move into premium audio

We’ve very clear about what our brand values are and we think there’s absolutely a part for our brand to play in the premium audio and multi-room audio spaces. R-Line is something we’ve developed to give consumers comfort. It still has all the Roberts safeguards you’d expect – but also our own cutting-edge twist on how we interpret the latest technology.

With our system, DAB is streamable in a multi-room environment, as is CD and anything else you can use with an auxiliary input. Crucially, we’ve also embraced an open-source format. There will be consumers out there who’ve invested in some equipment [by other brands], but will want to add a Roberts product to their system – we don’t want to make it tricky for consumers. We want them to have the ultimate choice.

Portability is something that we think is particularly important – on the S-Series there will be the ability to add an external battery pack, which will enable you to bring your multi-room experience outside of the home, or around the home with you. Within the range of your wi-fi network, you will have true portability – nobody else is offering that at the moment.

Q: The R-Line products will come out in April next year. Why have you announced them so far ahead of launch? 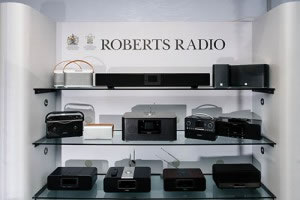 OW: It’s a statement of intent – the hardware is largely finished and we’re fine-tuning it to make sure it can give us the most intuitive experience possible. We’ve taken a simple view – we have one chance to get this right. We’re moving into an area that we’re not known for, so we have to be absolutely certain that our products will give consumers the best possible experience. We could rush it to get it out by Christmas, but it wouldn’t necessarily be worthy of having the Roberts brand on it at that stage. We’ve decided to take the extra time to make it as perfect as it can be. R-Line has taken about three years to develop. Under the R-Line banner, multi-room is just the first product proposition that will be on the table. There will be a number of other products that will not be in the traditional categories that we’re used to playing in.

Q: Will independents be key for selling R-Line?
OW: Independents have always held a special place in our heart – we will continue to invest in them and support them for as long as we can. There’s no question that R-Line offers independents an opportunity to sell up through ranges. I guess the key to selling multi-room and premium audio is demonstration – we will need dealers to invest in shelf space and product knowledge. The ability to demonstrate in-store will be paramount.

Q: How’s business in general?
OW: It’s been a good year for Roberts – the past two or three years have been very positive from a commercial perspective. The biggest challenge we have is to keep the radio market as buoyant as we can. There are fewer players than ever involved and we still haven’t had an announcement about [digital] switchover.
The Government’s not putting its money where its mouth is. That said, digital is the future – we have no doubt about that.

Black Friday bargain hunters would rather queue than crash