‘Manufacturers talk about supporting the indies, but a lot of it is just lip service’

These are busy times for Smeg. Not content with opening a brand new flagship store in London’s Regent Street in September, the company has also recently launched an impressive trade showroom and training facility in Abingdon, Oxfordshire.

The 14,000sq ft space – the Atrium – houses more than 300 products, from ovens and fridges to wine coolers and warming drawers, all with that unmistakable quirkiness that characterises the Smeg brand. There’s also a large ‘living kitchen’ with demonstration facilities and a dining area, plus a conference suite able to house more than 60 guests.

Q: With the new showroom, you’re ramping up your support for independent stores, aren’t you?
Mike Giddings: Yes – manufacturers talk about supporting the independents, but a lot of it is just lip service. They say one thing, but they don’t back it up. For us, it’s absolutely vital that we’re part of the independent sector and that applies to electrical retail and kitchen studios. To be fair, over the years we’ve made more progress on electrical retail.

The trade showroom is part of a £10 million-plus investment. Just buying this building alone was half of that. It’s about taking our brand image up and taking the industry up. It’s 70 per cent trade, 30 per cent consumer. The new London showroom [store] is more about the consumer, so there’s a yin and yang going on between the two massive investments. We’ve got a very bold statement when a lot of people aren’t making much noise.

Q: Why do you think that is?
MG: The market is tough. We’re growing but the currency situation isn’t helping.

We’ve managed to sell our way through the past 12 months, which have been pretty tough, mainly because of new products. We are where we are because of a strong brand, clear identity and new products.

Q: What level of growth can the two new showrooms help bring you?
MG: Controlled growth is best – organic and natural. 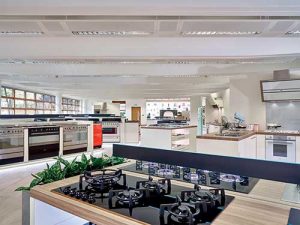 Q: What do you put the tough market down to?
MG: The loss of confidence. Brexit came as a bit of a shock. Who knows if that will turn out to be the right decision? Whether it does or it doesn’t, there are three or four years of difficult times. Clearly the currency has deteriorated, so we all have to set our economics on this market. Confidence will be low and currency will be volatile if not negative. It’s a case of hope for the best but plan for the worst. We’ve been doing that.

Q: What’s the mood among your retail partners?
MG: We’ve had some very big customers here [for the launch] like Stellisons. The good brands and good retailers will get the business. We do well with Stellisons. [MD] Steve Scogings coming here is a big thing for us. He deals with everyone and everyone knows who he is. He’s been very positive.

There’ll always be challenges, but there’s no need to be that gloomy. Most of our channels are doing really well. We’ve grown dramatically in range cooking over the past few years, and, from a standing start, small appliances are up to £7 million. But our built-in proposition has just got stronger and stronger. We have some very distinct families of products, which will be stunning. We’ve been a refrigeration brand, but first and foremost we’re a cooking brand. It’s where all the product development is going on. We’re also changing our logistics. Everything is built and we’re ready to go.

Q: How are independent retailers getting it right?
MG: They do a lot of theatre – it’s a lot more about the experience. Consumers are looking for an event when they go shopping these days. It’s not just about buying something you need, but something you don’t need, and making the experience much more enjoyable. That’s where the new breed of retailers are investing and that’s where they’ll stand out from the crowd. There’s no future in selling white boxes with a minimal price point. They have to look at more aspirational brands. They have to introduce theatre and experience. Most of the good retailers are going aspirational.

I’m a big supporter of Turning Point. It’s a bold attempt to enhance and make the most of the good things rather than concentrate on the bad things. Clearly the independent sector is getting smaller, but I’ve talked to people here [at the showroom launch] and they’ve got amazing businesses.

Wi-fi will dominate in laundry and refrigeration, says Futuresource