‘SDA is something that we need to be part of’

At IFA, Sharp announced its first small domestic appliances – cordless vacuum cleaners, a breakfast set, a multi-purpose ‘kitchen machine’ and a blender – and unveiled a range of wi-fi-enabled products, including an oven, fridge-freezer, dishwasher and washing machine

In an exclusive interview, Sean Hannam spoke to Matthew Lang, UK managing director of Turkish OEM giant Vestel, which makes Sharp appliances for Europe under licence, to find out more about its plans…

Q: Can you update us on the Sharp Home Appliances business? What’s happened since we spoke to you at IFA 2016?
Matthew Lang: A year on, from a commercial point of view, we’re in a much more stable position – we’ve had a lot of discussions with Sharp. The purchase of Sharp by Foxconn caused a reasonable amount of doubt, but that’s all been put to bed – we have the brand licence for a 10-year period and we’ve done two years, so that’s another eight years.

We’ve now expanded into small domestic appliances and we have air purifiers coming in –they’re becoming more of a topic for everyone. Sharp has a heritage in air purifiers.

Q: SDA is a crowded and competitive market. Are you confident that you can make a difference?
ML: We’re not going to pretend that it’s easy, but, as Vestel, we obviously have very big purchasing power – we know China very well and we know sourcing very well.

We think we can fight on a level playing field – there’s opportunity there. It’s tough, but it’s a big market.

We want to exploit the brand opportunities as widely as we can and SDA is something that we need to be part of.

Q: Sharp’s got a strong heritage in white goods in its native Japan, but with the exception of microwave ovens, the brand has always struggled to gain a major foothold in the UK appliances market, hasn’t it?
ML: That’s fair and it’s something we want to change. We have good products. A brand like Sharp, which, in MDA, hasn’t managed to get such a strong foothold in the UK market, still needs to have halo products – so people go, ‘wow, I know Sharp – ooh, that fridge looks amazing’.

Q: One of the major trends at this year’s IFA was connected home appliances – Sharp unveiled a range of wi-fi enabled products. Aren’t the current connected white-goods offerings quite disparate? People don’t tend to buy all their appliances from the same brand, so are there issues with different products from different brands talking to each other…
ML: I think they will become more and more ubiquitous – the devices will be connectable. I can see parallels with voice activation, which will have a much wider acceptance from the public.

For me, the smart home is similar – if the devices are connectable, over time, people will want to have a connectable device that is future-proof and then we’ll see where the ecosystem takes us. We’ll see who comes up with the best. Maybe it will be Amazon, or maybe it will be British Gas.

Q: That puts Vestel in a good position, because, as an OEM supplier, you’re brand-neutral, aren’t you?
ML: We’re agnostic. Vestel will push more into the smart home and we’ll come out with more small devices, like plugs and smart lights. As long as we’re selling connectable products, I’m not too worried.

‘The TV market is really tough – it’s a perfect storm’

Vestel has the licence for Toshiba TVs in Europe. We asked Matthew Lang, Vestel’s UK managing director, for his views on the TV market 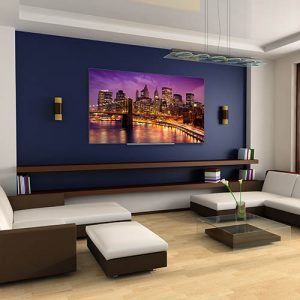 TV’s really tough – the market has shrunk. It’s a bit of a perfect storm. The depreciation of the pound because of Brexit has made import prices higher and it’s filtering through to consumer prices. Consumers don’t like to see that they’ve got to pay 100 quid more for a product than they did last year.

It’s definitely slowed the market – there’s no big sporting event this year and switchover has finished. People started to replace their old TVs and put flat screens on the wall in about 2011/12. Those screens are only a few years old – they don’t need replacing. Nobody’s in a massive rush to replace their main screen, but in the intervening time, they’ve probably replaced their second screen, or got rid of it, because they’ve moved to a tablet or smartphone.

Hoover Candy outlines its vision of the future