With two ERT awards, a new UK HQ and plans for a flagship London store, Italian appliance brand Smeg is on the up. And, as managing director Mike Giddings tells Sean Hannam, independents are crucial to its business…

When ERT turns up at the new, minimalist Smeg UK offices in Abingdon, near Oxford, we are welcomed by a message written in chalk on a retro FAB blackboard fridge in the reception area.

It’s a nice gesture, befitting a brand that has a quirky approach to the market, with striking product designs that stand out from the competition.

“We’ve tried really hard to show the warmth and openness of the brand – I think we’re a lovely company to deal with,” says managing director, Mike Giddings, a friendly, soft-spoken Welshman who has a one-off Smeg FAB fridge in his office, emblazoned with the Welsh flag and its dragon motif. You could call it his dragon’s den.

“There have been a lot of changes over the past few years – we have a young CEO, Vittorio Bertazzoni, who’s brought a freshness to the brand in terms of product development and its personality, that runs through into the UK. Ten years ago, we were probably seen as being a little bit detached from the marketplace – maybe even aloof.” 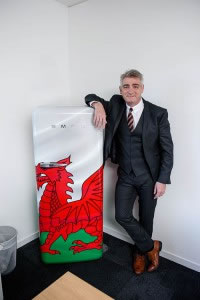 This friendly and open approach has obviously paid dividends. Smeg has dramatically increased its presence in the independent electrical sector. Last year it won two ERT awards and it has seriously raised its profile as a brand. And it doesn’t stop there. Before the end of this year, as part of a £10 million investment, it will open a flagship store of more than 6,000 square feet in central London – ERT has seen the plans, but we are sworn to secrecy – and it will convert the downstairs of its Abingdon HQ into an area called The Atrium, featuring two cookery school areas and an amphitheatre.

“We need to hang out with our consumers more and educate and inspire them,” says Mr Giddings. “It’s a massive investment – I don’t know many companies of our size that have that commitment to the industry and the UK.”

Q: The past few years have seen Smeg performing well, haven’t they?
Mike Giddings: We’ve been on a consistent trajectory of growth, but it gets harder every year. Not only because of expectations, but also, I think, looking at this year, with the global economy not being as buoyant as it was. We started the year confident, but with one eye on what’s happening in the wider world. I have to say that the first month [January] was great, so the success is continuing at the moment, which is positive. Hopefully, we can look forward to another successful year. In 2008/9, like a lot of companies, we had a tough time, but I think we started recovering very, very quickly. For the past couple of years, we weren’t in recovery – we’d recovered. We’re now doing turnover far and beyond what we did prior to the recession.

Q: What do you attribute that success to?
MG: It’s not just one year in insolation – it’s been building up over a period of years. When the recession hit, our factory continued to invest in systems and new products. We’ve been prolific.

The foundation of everything we’ve built over the past few years has been new products, but we’ve continued to invest in other areas as well – like the new building we’re sitting in now. We moved in here in September/October last year. We bought the building – we own it. That was one of our objectives – to have our own identity. We’ve got lots of plans for it. It’s been a massive boost for us – we were struggling for space for a while [in the old offices] and we were ready to invest in other areas. 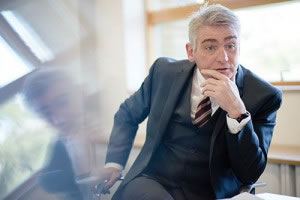 In February, we went live with £200,000 worth of new computer software to support the business and we’ve doubled our warehousing space in the past two to three years to 150,000 square feet. We’ve got a [distribution] hub in Coventry, which has allowed us to deliver to more customers more often and we’ve also doubled the staff that we had in 2008/9.

Q: In the past few years, Smeg has ramped up its presence in the independent electrical sector. Prior to that, the brand wasn’t as strong in the indies, was it?
MG: If you look at where we should be strong, along with department stores, the natural habitat for Smeg is the independent sector. We build very good, beautiful products and we ask a premium for them, which we believe is justified because of the quality and the functionality.

A real litmus test of how we’re doing is how much we’ve progressed in the independent sector. In the past 18 months, we’ve won an ERT award [White Goods Supplier of the Year] and in December 2014, we won a Euronics award and we won Sirius Supplier of the Year last year. Those awards tell you what we’re doing in the UK in terms of supporting retailers, the margins, the quality of the products and the aftercare. That’s a real indication of how far we’ve come.

We’ve got good people and we’ve just expanded the independent sales team by a third. We’re doing very well, but the potential’s there to do even better – we just needed more people. We’ve also invested in a dedicated training team of five people for the independent sector.

We’ve put a lot of effort into it and because those products are protected, it’s made a huge difference within the independent sector. The evolution of that are the Smeg Zones [store-in-store areas]. We have seven at the moment and there are plans to expand them. They’re proving very successful. The Smeg Zones work because we get more products on display and they are displayed in the right way. They seem to be making a difference in terms of sales within those stores – every single one has been a success. You’ll see more Smeg Zones in 2016 – we’re currently talking to a number of retailers.

Q: Two years ago, in April 2014, Smeg moved into small domestic appliances. How has that worked out for you?
MG: Last year was our first full 12 months with SDAs and it’s been phenomenal. It’s also lifted the brand profile and exposed us to a customer base we didn’t have before. It takes Smeg into the gift market. We’re an aspirational brand – now people can buy a Smeg appliance as a gift. That’s making a big difference. A lot of manufacturers were simultaneously trying to get into SDAs, but, in the typical Smeg way, we’ve managed to find something different and unique. Style-wise, we believe they’re stunning products, but they also perform very well. They’re award-winning products – the ERT award [Domestic Appliance Product of the Year 2015] was one of them and we’ve had a Which? Best Buy.

Last year, we couldn’t keep pace with the demand, but now we’ve got the right production coming from the factory, so we’ve got an opportunity to tap into the real potential that SDAs offer us.

We’re looking to more than double our business in SDAs this year and that’s without expanding the range. There will be new SDA products this year – some [were] at the Euronics show [April 17-18, NEC, Birmingham]. The timing is good for us – it coincides with when we’re bringing a lot of new products in, so we use it as a platform. Euronics have been very supportive in launching our SDA products – they’re a really good partner. It’s become a very important – if not the most important – event in our calendar as far as trade events are concerned. We also do the Sirius event, which is very successful for us.

Q: Smeg is well known for its retro design products, like the FAB fridge, but do some people think that’s all that Smeg does?
MG: Five or six years ago, I would definitely have said that was the case, but we’ve made so much ground – particularly in cooking. Of course, the FAB refrigeration is a fantastic asset for the brand – there are very few products that you can say have genuinely changed the industry, but the FAB fridge has. It has an iconic image and it has helped us to build a very aspirational brand on the back of it, but there’s far more to Smeg than just FAB refrigeration. We have 900 products in the range – like well-functioned cooking products. 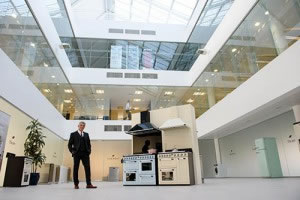 Smeg comes from an area of Italy where food and cooking are in the DNA and in the culture. For us, cooking products are at the core of our range – be it built-in or freestanding.

Our range cooking business has grown phenomenally since we introduced the Victoria, which has more of a retro, traditional look. In the past six to eight months, we introduced the Burghley [range cooker] to the independent trade and that’s been a tremendous success.

We’ve always had a pedigree of making good range cooking products, but what’s been new is the more traditional style of products – prior to that, they were contemporary and stainless steel. It’s a very lucrative market in the UK and we’re catering for that. Along with SDAs, it’s probably the most successful product launch we’ve ever had. The independents are very good at selling that type of product.

Q: What’s your take on the UK white-goods market? Is it tough?
MG: We’re in competition with everyone, but there’s no direct competition to Smeg. I look at what we do and there’s no company that matches us, so we’re very lucky. We tend to avoid a lot of the difficulties in the market. Clearly, the market is not as buoyant as it was 12 months ago but, as a relatively niche brand, operating in some very distinctive markets, we’re managing to find a lot of opportunities. We’re not feeling the pinch in the way that maybe some of our competitors are.

All of our cooking products – built-in and freestanding – are doing very well and we’ve had a huge amount of success in the past year or two on American side-by-side fridge-freezers. There’s not a weak area in our product range.

Q: Who do you see as the typical Smeg customer?
MG: It depends on the products – the FAB fridge puts a smile on your face. It’s a fun element of the range, but some of the new cooking products at the top end, like the Dolce Stil Novo and the Linea range, are more contemporary. We’re an aspirational brand and we feel we compete in the luxury goods market. We’re not just competing against other appliances, we’re competing with holidays to Dubai, Ping golf clubs or Jacuzzis – discerning consumers who have disposable income.

There is a need for a brand like Smeg in the industry – we have a clear identity. We’re a single brand and we know where we want to go next. Look at the interbreeding and the blending of brands that’s going on – it’s causing a lot of confusion. Retailers trust us and we are seeing the support from the trade because of it. They know what they’re getting from Smeg.

We survive by being different.