Is this the real life?

Legendary Queen guitarist Brian May’s lifelong passion for 3D technology has led him to reinvent the Owl stereoscopic viewer for the virtual reality age. He talks to Andrew Davies

Brian May has been described as the polymath of British rock. While his creative and imaginative guitar is as much a voice in Queen as the legendary Freddie Mercury was, he is also a doctor of astrophysics, an animal rights campaigner, a vehement opponent of basement conversions and, perhaps most unlikely, one of the country’s foremost experts in the history of 3D devices.

As rock stars go, he is less likely to throw a TV out of a hotel window as he is to meticulously take it to pieces to see how it works.

Mr May’s love of all things 3D stems from his childhood, in particular collecting the ephemera of Victorian stereoscopy – a fad that covered the latter half of the 19th century.

Stereoscopy is based on a simple principle. Your eyes are spaced slightly apart and so see different views of whatever you’re looking at. Your brain then processes both these images into one 3D view.

The Victorians worked out that by taking two photographs slightly apart and viewing them through a stereoscopic device, you could fool your brain into seeing a 3D image.

In 2008, Mr May and a group of like-minded enthusiasts resurrected The London Steroscopic Company, the Victorian firm that led the fad 150 years or so earlier and, while acting as a resource for the history of the movement, it also sold a patented viewing device, known as an Owl, that would allow users to enjoy the original Victorian stereo cards, as well as new originals including Queen-focused pictures from Mr May’s own collection.

He has now brought out a new version of the Owl, the Owl VR, that lets you mount a smartphone inside the viewer, opening the door to 3D video and games, as well as static images.

In an exclusive interview, ERT took the opportunity to talk to him about 3D, his dad’s love of inventing and how technology is affecting the way music is consumed…

Q: Your interest in VR stems from your lifelong passion for the 3D concept. What is it that caught your imagination? 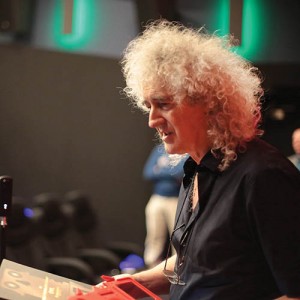 Brian May: It was always the magic of seeing an image in three dimensions instead of two, simple as that. Flat photographs can be a nice memento of an occasion, but the 3D picture makes you feel like you are there for real. So I always wondered why everybody didn’t embrace 3D photography and forget about mono altogether.

Q: With the Owl VR, you clearly see your role as continuing the development of 3D, not just the trustee or collector…
BM: I love being a part of the whole 3D scenario. I always dreamed of being active and contributing, giving back to the flow that has always excited me so much. I paid my dues in the English Stereoscopic Society 40 years ago, and benefited from the advice of several old masters of the art. Now I can use my skills and energies to transmit new stereoscopic advances, like VR.

Q: With the Owl VR, it looks to me like you wanted to put the concept into people’s hands at an affordable price with real ease of use…
BM: Yes, that’s it exactly. I have come to VR from a different angle from most VR kit makers. Most of the technology was already there, developed 10 years ago for viewing pure 3D in books and classic cards and slides. But as soon as I saw what was going on with the addition of the 360 degree element, with Oculus Rift etc, I realised I had in my hands the capability of offering people something a little different – high quality yet inexpensive.

Q: Will you continue to develop your own content? What content do you think will really appeal to consumers?
BM: Yes, hopefully we will. The great project we now have in the bag is a ‘flying VR’ shoot of our Queen and Adam Lambert show in Barcelona in May. It’s an idea I had some time ago – but the technology to put it into practice only recently became available. It’s never been done before, to my knowledge. The processing is very complex and time-consuming, but already we have a teaser of one track, which is blowing people’s minds. So I’m always up for new projects.

Q: What do you think of 3D technology in general?
BM: I have a 3D TV and I made a nice ‘history of 3D’ documentary for the Sky 3D channel. My feeling is that 3D on TV is not really taking off, possibly because people don’t want to be rooted to the spot to watch a film at home. They like to be doing other things at the same time. However, I think 3D is now firmly established in movie theatres, and as long as the quality of 3D stays good, I think it will stay that way.

Q: Your dad was an electrical engineer – is it true that he built the appliances in your house?
BM: We had no money, so all that he earned went into paying back the mortgage on our tiny semi-detached house. That meant he bought all the electrical stuff he needed from government surplus stores, like the one in Lisle Street in London. He built our TV in about 1952 – the first in our street. It had a very small screen that came from the cathode ray tube of a radar device. There was just the one BBC channel, of course, but then he made an adaptor for it, so we could watch the second channel – ITV. I still remember the excitement when we first saw Noddy on screen. My dad also helped me build my guitar. We did it together over about two years in his workshop, which was actually a converted third bedroom. 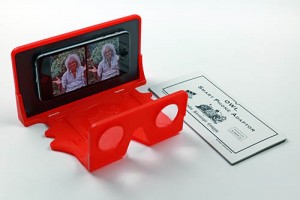 Q: Did that interest in electronics extend into how you listened to music as a boy? Did you build your own radio, for example?
BM: I made a crystal set – very much under my dad’s guidance, because to this day I do not have the understanding that he had of valves and transistors. My crystal set had one stage of amplification, so the quality on my ex-German submarine headphones was really good. I used to listen after bedtime under the covers to the latest rock-and-roll music on Radio Luxembourg.

Q: Another example of using the technical knowledge within the band to get to ‘the sound’ is the ‘Deacy Amp’ that you ran your guitar through. Is it true that bass player John Deacon built it from bits he found in a skip?
BM: He did. John has an excellent electronics brain. He got his first class honours degree in the subject at Chelsea College. He somehow married a piece of printed circuitry to a loudspeaker from a cheap hi-fi set that had been thrown away, and it made a completely unique sound. Still does. I still use it. We’ve had some of the most talented electronics engineers trying to duplicate that sound for years.

Q: There is a revival of vinyl for real music buffs, how do you feel about it?
BM: I like vinyl a lot. Unfortunately, we were all hoodwinked into thinking CDs were a step forwards when they were introduced. But, of course, the sampling rate and number of bits was never good enough to compare with a clean vinyl record with a new stylus. People generally find they listen to vinyl for long periods and enjoy it without getting tired. The same isn’t true of CDs – the waveform is too jagged.

Q: You have a huge best-selling back catalogue, so what’s Queen’s relationship like with streaming sites such as Spotify and Apple Music? Does your success give you any clout with them?
BM: We don’t really have any more clout than anyone else. I think everyone feels that music as a craft has been ripped off, and almost everyone expects to get it for nothing now. But this is the modern world.