‘Town centres are salvageable as something different’

Five years on from his last review of the high street and town centres, former boss of Iceland and Wickes, Bill Grimsey has launched the sequel – Grimsey Review 2. In an exclusive interview, he tells Sean Hannam why and what needs to change this time around…

Q: It’s five years on from your first review of Britain’s high streets and town centres. How many of your recommendations were taken on board by the Government?
Bill Grimsey: Not many at all – as far as the high street is concerned, I think the Government wanted to do a bit of razzmatazz with Mary Portas, which they did – they spent almost a million quid, which is a drop in the ocean, and it got squirrelled away into nine towns with £100,000 each, which didn’t do much.

They basically pooh-poohed what we were doing, and the Labour Party didn’t prove to be any better, but I’ve spent a lot of time speaking to local authorities up and down the country and we have had a good reception. They’ve all said that they understand what needs to be done in terms of looking to the future, but, if they come up with the answers, they don’t understand how to implement them. They all say they’ll come back to me, but they never do, due to other pressures. 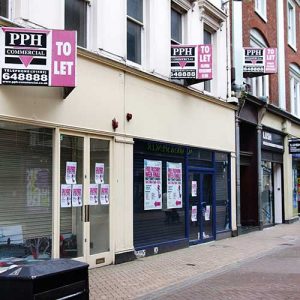 It’s time to wake them up and get them to smell the coffee – there are enough coffee shops for them to be able to do that! That’s why we’ve launched the review process again and we’re going to publish the review on July 4 at the Local Government Authority Conference in Birmingham. This time around, we’re not going to be in competition with Mary Portas and we’re not going to chuck brickbats at anyone – we just think it’s time to produce a quality, evidence-based piece of work that people can hopefully use to make changes.

Q: Is it about reviving the high street, rather than saving it?
BG: Absolutely – it’s about reviving the high street in a different mode. It’s not a retail destination that we’ve got to concentrate on – it’s a community hub concept with health, education, entertainment, leisure, pedestrianisation, lots of good activities, events and festivals, and housing, particularly for older people.

We can start to make places for social gatherings, where, if you’ve got enough footfall, you can have shops, including electrical ones. I still believe that’s the right way to approach it, but we’re going have to deal head-on with some thorny issues this time and not beat around the bush.

Car parking has got to be free for two hours – no question – and we’ve got to deal with the issue of business rates. We need to understand what’s being extracted from commercial premises for the services they receive. We need to find another way of raising money for other activities. I think town centres and high streets are salvageable as something different – you can’t go back or reminisce. Everybody says, ‘oh, I loved my high street and I loved Woolworths for Pick and Mix’ – the reason they went bust is because you didn’t use ’em!

Q: Any advice for independent electrical retailers?
BG: If you’re a small electrical retailer and you’re going to keep up, you’ve got to look to your strengths – what’s making people come and shop with you? Have you got an online presence – are you linked in to a local community app so you can connect with your local customers? It’s all about convenience. That’s where your speciality is. How quickly can you get what they want to them? You’ve got to do something like that – otherwise you’re not going to be around.

Planning for the comeback – part two